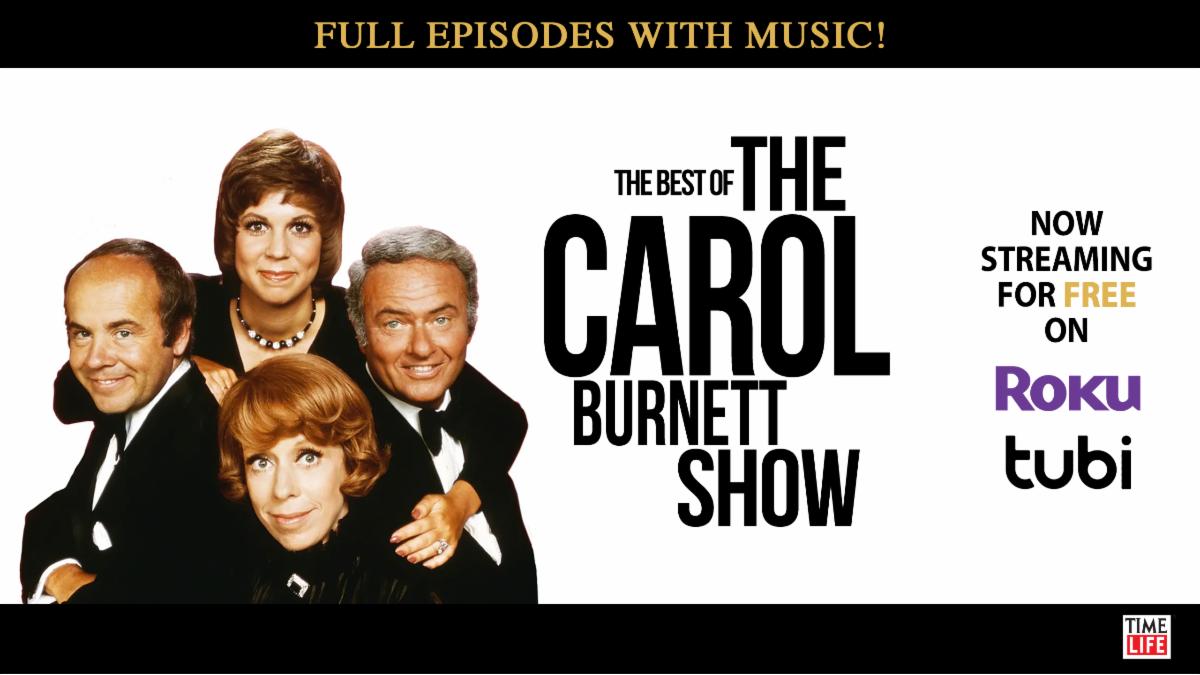 There are few TV variety shows from the past that have stood the test of time. Most have been lost to the ages, but one – by virtue of its timeless comedy, iconic cast, stellar guest stars and classic music – stands atop them all as one of the landmark programs from the Golden Age of TV: THE CAROL BURNETT SHOW. Time Life has listened to fan feedback and this October in concert with Proven Entertainment proudly releases true treasures from the vault with 65 full episodes (with music included!) of the beloved, Emmy® Award-wining series to streaming platforms for the very first time.

“I am happy to announce that through our long-time partners at Time Life, we are now releasing for streaming sixty-five hand-picked, full episodes of The Carol Burnett Show including one of my favorite parts – the music!” says Burnett.

On September 11, 1967, Burnett and her madcap cast took to the airwaves on CBS for a new variety series that combined sketch comedy, singing and dancing. Little did they know THE CAROL BURNETT SHOW would become an Emmy Award–winning program and survive the changing tastes of TV audiences to last eleven seasons. During its run, the show was the recipient of 25 Emmy® Awards and eight Golden Globes®, making it one of the most honored shows in television history. TIME Magazine named The Carol Burnett Show one of the “100 Best Television Shows of all Time” and Carol Burnett has been honored with more People’s Choice Awards than any other actress. Now, THE BEST OF THE CAROL BURNETT SHOW will be available to stream for fans of both the series and classic television who can tune in and rediscover what made the program tick and stick around as one of the best hours in all of TV history.

Through these 65 episodes, consumers will see the very first steps of a TV icon, the magic of Carol’s cast coming together, and an incredible array of guest stars including Carol’s hero, Lucille Ball, along with Carol Channing, Steve Lawrence, Bob Newhart, Don Rickles, Chita Rivera, Burt Reynolds, Mickey Rooney, Jonathan Winters and many, many more. Also included across these treasured episodes are all-time classic sketches such as “Mrs. Wiggins and Mr. Tudball,” “Carol and Sis,” “The Oldest Man,” “The Family,” and “The Dentist,” spoofs like As the Stomach Turns and Went with the Wind, the unforgettable two-hour series finale and many more!

The Best Of Carol Burnett Show on Roku

Time Life is one of the world’s pre-eminent creators and marketers of unique music and video products, specializing in distinctive multi-media collections that evoke memories of yesterday, capture the spirit of today, and can be enjoyed for a lifetime. TIME LIFE and the TIME LIFE logo are registered trademarks of Time Warner Inc. and affiliated companies used under license by Direct Holdings Americas Inc., which is not affiliated with Time Warner Inc. or Time Inc.