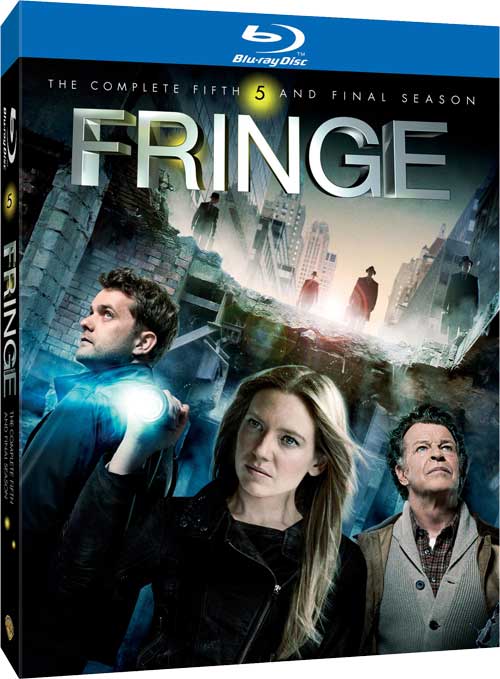 The battle to save our world reaches a climactic conclusion as the Fringe team makes its final stand in the release of Fringe: The Complete Fifth & Final Season from Warner Bros. Home Entertainment Group. The critically acclaimed fifth season of television’s most thrilling sci-fi series features 13 mindbending episodes with over 90 minutes of special features, including an exclusive featurette, coverage of the Fringecast at Comic-Con 2012, producer commentary, and a gag reel. Warner Bros Home Entertainment Group (WBHEG) is releasing Fringe: The Complete Fifth & Final Season and Fringe: The Complete Series on DVD and Blu-Ray May 7, 2013 with SRPs of $39.98/$49.99 and $159.96/$197.50, respectively.

Season Five picks up from events depicted in Season Four’s flash-forward episode “Letters in Transit,” wherein the once seemingly peaceful Observers have seized control of our universe. Now, in 2036, they have become ruthless rulers who stand unopposed, and the Fringe Team is forced to take their final stand. The remaining Fringe team – comprised of Fringe scientist Water Bishop, Walter’s son, Peter, and FBI agents Olivia Dunham and Astrid Farnsworth – is joined by Olivia and Peter’s now-grown daughter, Etta, in a final season filled with struggle, surprises and sacrifice. The team must bring together all they have witnessed in preparation for the final battle to save their world.

Fringe executive producer/showrunner J.H. Wyman said: “We’re extremely excited that the fifth and final season of Fringe will be out very soon this coming spring. From our cast and crew, to all of our friends in the press and especially to the fans, we could not be more grateful for this incredible experience. We hope this DVD set gives an even closer look at the amazing adventure we had these past five seasons.”

“We are thrilled to release Fringe: The Complete Fifth & Final Season and Fringe: The Complete Series on DVD and Blu-ray,” said Rosemary Markson, WHV Senior Vice President, TV and Special Interest Marketing. “Season Five took fans on an extraordinary final journey with the Fringe team – one filled with unimaginable struggle, hypnotic suspense, and heart-breaking drama. While we’re sad to see this iconic show come to an end, we are excited to make the Fifth Season and the Complete Set available on DVD and Blu-ray, so the show’s loyal fans can re-watch their favorite episodes again and again.”