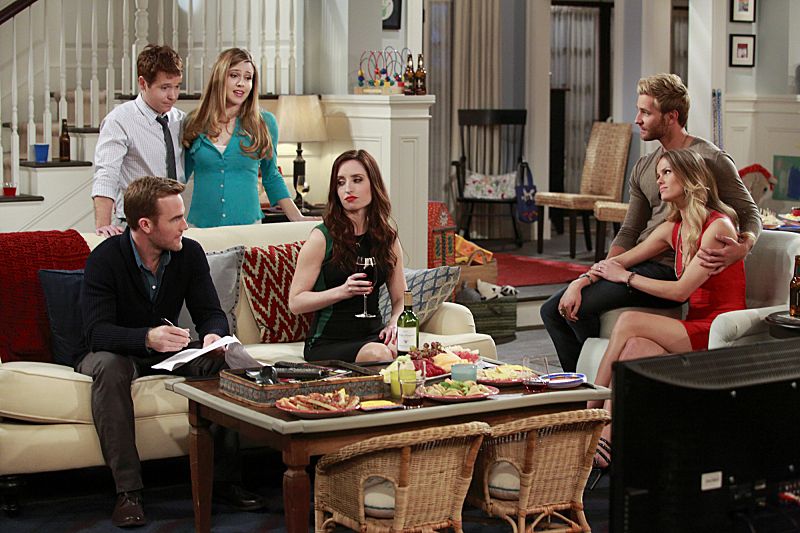 Ever wish there was a sitcom on the air about a bunch of friends hanging out together and talking about their love lives and foibles? Ever wish there were thirty-two of them? FRIENDS WITH BETTER LIVES, premiering tonight on CBS, seeks to answer that latter dream, yet another of a long tradition of Friends-esque shows. And like most of the copies of that popular series, this one seems doomed to be quickly canceled and forgotten.

The cast is made up of stock stereotypes. Bobby (Kevin Connolly, Entourage) and Andi (Majandra Delfino, Roswell) have been married seven years and are stuck in a rut. Their sex life has almost completely dried up. Andi feels comfortable pumping her breast milk not only in front of Bobby, but in front of their friends as well. Neither remembers their anniversary. They seem doomed.

But there’s always someone who will envy any given situation, and Bobby and Andi’s comfortable relationship is one envied by some; namely, Bobby’s business partner Will (James Van Der Beek, Dawson’s Creek). Not only do Will and Bobby share an OBGYN practice, but also a home, as Will has been kicked out by his wife and wants nothing more than to go home. Until he can make that happen (or, more likely face reality), he is crashing with Bobby.

At least Will had a spouse, though. Kate (Zoe Lister Jones, Whitney) is the one in their group that is still single and hates it. This could be because she is superficial and super picky, willing to shoot a guy down for the smallest (pun intended, which you’ll understand after viewing the “Pilot”) reasons. So unless she can loosen up, she probably won’t find her Mister Right.

Making them all gag are Jules (Brooklyn Decker, The League) and her new hippy fiancé, Lowell (Rick Donald, The Doctor Blake Mysteries). These two have been together a scant few weeks, but are all over each other, and somehow decide they’re ready to commit to a lifetime. It’s way too fast, but given the nature of the series and that they’re both main characters, it will probably last at least through the all-but-certain cancellation this spring.

This is a fantastic group of actors. Lister Jones and Van Der Beek, in particular, should absolutely be doing comedy on television. I wouldn’t even mind seeing that pair as a couple, which is set up blatantly in the premiere, though the run might be too short to get to them, because they both have impeccable timing and presence. The rest are well-cast, too. FRIENDS WITH BETTER LIVES could overcome the familiar structure and be something worth watching if the group solidifies into a strong dynamic.

The problem that can’t be overcome, though, is the terrible writing. The “Pilot” goes for the obvious jokes, and even before the viewer can elicit a groan, the laugh track (I refuse to believe a studio audience finds the show this funny) overwhelms. It’s a string of hammy, dumb gags, constantly hammering audiences over the head, in case we can’t figure out what’s funny on our own.

The lack of good material will kill this show. Just in case the program itself wouldn’t flop big enough on its own, it premieres after the series finale of How I Met Your Mother, a long-running ensemble piece that will surely knock the ending out of the park. This stark contrast when viewed back to back will arrest any momentum FRIENDS WITH BETTER LIVES might have gotten out of a lesser lead-in.