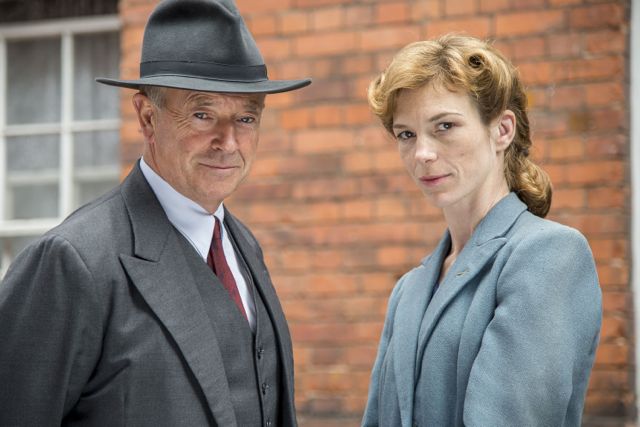 Filming of the 3 x 120’ episodes will begin in January 2014 and, as with the previous series, will be inspired by real events in the early Cold War.

In his role as a Senior Intelligence Officer for the secret service-MI5 Foyle continues to be immersed in the dangerous world of espionage at a time in our country’s history when political and foreign governmental relationships were delicately balanced.

Honeysuckle Weeks also returns to her role as Samantha Stewart, Foyle’s trusted associate and ally who successfully navigates the shadowy world of intelligence and dedicatedly assists her former boss as he seeks to uncover the truth of the cases he investigates.

With each episode scripted by Anthony, he will explore powerful American and German industrialists, the latter from the chemical giant I G Farben, accused of fuelling Hitler’s War Machine, and reflect on the tangled web of promises to the Jews to create a state of Israel in British Palestine. The major blight of post war Britain, the Black Market, will also feature with the focus on some of the darkest secrets from operations conducted by the British secret service during WW2.

The films are being produced for ITV and Acorn Productions by Eleventh Hour Films, the production company founded by executive producer Jill Green (Injustice, Vexed, Collision). John Chapman (The Street, Cracker, The Lost Prince) will produce each of the episodes based in Liverpool, as the city doubles for post war London.

Acorn Productions Limited is an RLJ Entertainment Inc. company, itself a leading distributor of British Television in the U.S. Acorn Productions owns and manages the rights to the Foyle’s War brand. Called the “chief curators of the best Brit TV” by TIME magazine, RLJ Entertainment’s Acorn brand releases Foyle’s War in lavishly packaged DVDs and Blu-rays, including Set 7 in Sept. 2013, which featured the three most recent mysteries. Additionally, Acorn TV, the first British focused streaming service in North America, features all 25 previous episodes available for streaming at www.Acorn.TV and via its popular Roku channel.

The new episodes have been commissioned for ITV by Director of Drama Steve November and Head of Drama Series, Jane Hudson.

“We are delighted to see the return of Foyle’s War to ITV,” said Jane. “Anthony Horowitz has written three outstanding episodes and the audience are in for a real treat. This series also gives us the chance to take the shoot to one of the jewels of the North West, Liverpool.”

Hilary Strong, Managing Director of Acorn Productions Limited added: “It is the combination of great writing, exceptional acting and an extraordinary eye for detail that makes Foyle’s War one of Acorn’s most respected properties.  We are thrilled to be working again with Eleventh Hour Films and ITV following the success of the last series, which continues to sell successfully around the world.”

Filming will continue until April 2014 with broadcast anticipated in the U.K. and U.S. in 2015.