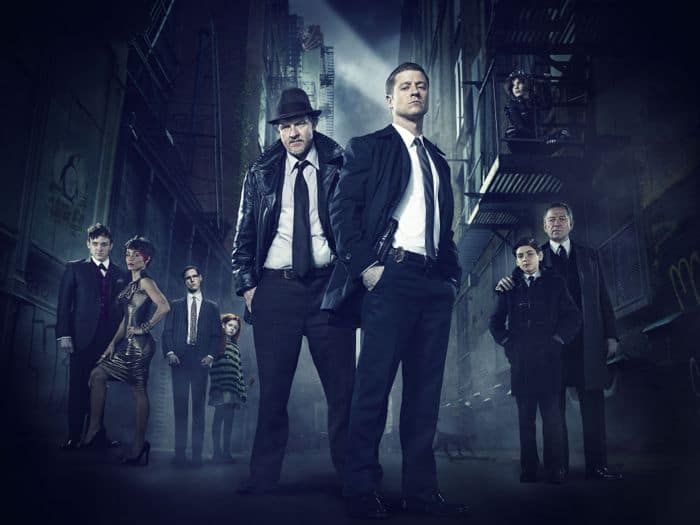 Here are the highlights, night by night, for this November on FOX:

Abbie (Nicole Beharie) and Ichabod (Tom Mison) learn that Katrina (Katia Winter) is in imminent danger, and they must race against the clock to help her.

When a Gothamite is found beaten to death, Gordon and Bullock (Donal Logue) are intrigued by the motive and take on the case. Meanwhile, Bruce (David Mazouz) returns to school and has trouble making friends.

Abbie and Ichabod set out to take down a succubus whom Henry (John Noble) has sent to drain the life forces out of its victims.

Abbie and Ichabod’s investigation into a string of mysterious deaths at Tarrytown Psych lead them to discover that an especially surprising spirit is involved.

Following a misstep, Gordon is reassigned to duty at Arkham Asylum. Meanwhile, Selina (Camren Bicondova) leads a new friend on a perilous journey through Gotham to evade the assassins after her.

Abbie and Ichabod are on a quest to find a weapon of ultimate power to kill Moloch – the Sword of Methuselah – before the Headless Horseman can stop them.

On the Season Two premiere of MASTERCHEF JUNIOR, the kids are back and taking over the kitchen! America’s first-ever MASTERCHEF JUNIOR, Alexander Weiss, returns to present the mystery box challenge, and the 16 junior home cooks are tasked with preparing impressive dishes using Alexander’s favorite ingredients, including pork chop, pork tenderloin, green apples, hazelnuts, Brussel sprouts, filo dough, fingerling potatoes, wild rice, whole grain mustard and artichoke. The winner of the challenge will have a significant advantage and select which of the judges’ favorite proteins the remaining contestants will prepare in the elimination round. Later, the 12 junior home cooks with the best dishes will advance in the competition.

In a flipping awesome pre-challenge, the junior home cooks race to see who can flip and stack the most pancakes. Then, the judges find themselves in a sticky situation when they get…syruped!

Mindy has no qualms about “borrowing” things that don’t belong to her, until she catches Danny’s mom (guest star Rhea Pearlman) shoplifting. Meanwhile, Peter finds out that there’s a downside to dating a low-maintenance woman.

The Top 10 junior home cooks pair up to create a delicious box of 12 cupcakes. Later, Chef Ramsay’s mom visits the MASTERCHEF kitchen as a special guest judge, and the kids prepare their own version of one of Ramsay’s favorite dishes growing up.

Jess, Coach and Ryan (guest star Julian Morris) attend a teachers’ conference, led by education guru Brenda Brown (guest star Lisa Bonet). Back at the loft, Nick, Schmidt and Winston attempt to have a wild weekend while Jess is out of town.

Mindy is forced to act as a mentor to the residents at the hospital, and Danny gets himself into trouble when he finds – and can’t help but read – Mindy’s diary. Niecy Nash guest-stars.

The remaining eight junior home cooks will have 10 minutes to fry as many perfect sunny side-up eggs as possible. Later, the kids dream big, and imagine running their own restaurants. With only an hour on the clock, they will prepare their signature dishes that, one day, will be featured on their menus.

With winter coming and everyone still single, Schmidt initiates a “Bangs-giving”-themed Thanksgiving dinner party, to which everyone must bring someone compatible for someone else.

Mindy sets up Danny’s mom on a blind date, but things get complicated when Annette’s dating life starts to go too well.

In the next team challenge, each team member must prepare a tasting menu for a Best in Show competition with the American Kennel Club.

Following last week’s challenge, both teams will roll dice to determine the ingredients for their next team challenge dish. At dinner, the remaining contestants serve music legends including Stewart Copeland of The Police and Steven Tyler of Aerosmith.

Kara, Hunter, Jordi and Dash band together in support of Nurse Jackson, whose actions have caught up with her. Meanwhile, Emma meets Leo’s friends from home, and one of the kids’ circumstances changes dramatically.

After two contestants leave the competition, Chef Ramsay challenges the remaining contestants to an Indian cuisine challenge. At dinner, one team can’t stand the heat – or each other – and continue to mess up their stations.

At the behest of Nurse Jackson, Dr. Naday (guest star Adrian Lester, “Primary Colors”) comes to Ocean Park Hospital, although his approach to treatment has her questioning that decision. Meanwhile, Emma, Dash and Jordi venture out of the hospital in search of the perfect gift, and Kara learns the truth about Hunter.

In the next team challenge, the remaining contestants will be tasked with the signature HELL’S KITCHEN blind taste test. After dinner, Chef Ramsay is disappointed in both teams and asks each team to present a member for elimination.

Romance is in bloom at Ocean Park Hospital, as things heat up between Kara and Hunter. Also, Leo and Emma get romantic, as Emma gets unexpected news. Meanwhile, Dr. McAndrew tries to win Dr. Grace back. Bella Thorne (“Alexander and the Terrible, Horrible, No Good, Very Bad Day”) guest-stars

The team attends a Forensic Science convention, only to discover smoldering human remains in a stairwell during Brennan’s (Emily Deschanel) keynote speech. When evidence points to Dr. Hodgins (TJ Thyne) as a suspect, the team has to find a way to prove his innocence, and Brennan has a run-in with her publishing rival, Tess Brown (guest star Nora Dunn).

Jack Reinhold’s (Nick Nolte) dark past comes to light, and Beth Solano (Virginia Kull) decides to open up to the press – and to her husband Mark (Michael Peña). Meanwhile, Detective Carver (David Tennant) finds himself in the hospital as his condition worsens.

Brennan and Booth (David Boreanaz) and the Jeffersonian team investigate the murder of an immigrant maid whose remains were found on the side of the road. The victim’s wealthy former employer (guest star Phyllis Logan, “Downton Abbey”), is a key suspect in the case, but when the team discovers the victim might have been brought into the country illegally, clues point to the possibility of a case of human trafficking. Amidst talks of marriage between Cam (Tamara Taylor) and “squintern” Arastoo (guest star Pej Vahdat), tensions rise between Brennan and Cam as Arastoo prepares his dissertation for Brennan’s approval.

Detective Miller (Anna Gunn) faces a major crisis in her own family that mobilizes the entire town until a new suspect is arrested, and Detective Carver (David Tennant) has an unexpected visitor at the police station.

When a famous crossword puzzle master is found in an urban fracking site, the team investigates the lives of his fellow puzzle-obsessed players. Meanwhile, “squintern” Daisy (guest star Carla Gallo) wants the team to be in the delivery room with her for the birth of her and Sweets’ baby.

As the search for Danny’s (guest star Nikolas Filipovic) killer continues, the Solano family tries to slowly adjust to life without their son by going back to work and school. Meanwhile, Susan Wright (Jacki Weaver) is brought in for questioning when the Gracepoint Journal uncovers some disturbing information about her.

An all-new episode follows a group of pioneering Americans who choose to leave their everyday lives and move to a remote location, where they come face-to-face with the ultimate adventure: creating their own civilization from scratch.

In an encore, Gordon and Bullock search for the source of a new street drug.

The all-new episode continues to chronicle the Pioneers’ attempt to create a new society.

In an encore, a killer targets the first-born of Gotham’s elite, forcing Bullock to confront traumatic memories from a nearly identical case he worked in the past.

Will the Pioneers vote one of their own out of Utopia?

An encore of the Nov. 3 episode.

Tina (Dan Mintz) begins an unlikely romance with a ghost that she believes is trapped in a shoe box.

There’s a mole in the precinct, and Holt (Andre Braugher) and Jake (Andy Samberg) need to find out who it is before Deputy Chief Madeline Wuntch (guest star Kyra Sedgwick) gets wind of it. Meanwhile, Terry (Terry Crews) and Rosa (Stephanie Beatriz) visit a silent disco to uncover leads for their new drug task force.

In an encore episode, Peter (Seth MacFarlane) and Quagmire (MacFarlane) form a musical act in the vein of Simon and Garfunkel. Conan O’Brien and Nick Kroll (“The League”) guest-voice.

Mulaney (John Mulaney) tries to figure out why Jane (Nasim Pedrad) doesn’t like any of the girls he dates. Meanwhile, Lou (Martin Short), who is fixated on the idea of his death, gets Mulaney’s help in planning a dignified way to die.

Jake hits it off with Sophia (guest star Eva Longoria), a woman whom he meets at a bar, only to find out she is the defense attorney for a perp he is trying to put in jail.  Meanwhile, Gina (Chelsea Peretti) and Charles (Joe Lo Truglio) attempt to put their relationship behind them.

Brian (Seth MacFarlane) loses his teeth after a fight with Peter, but discovers his cosmetic dental surgery has given him a winning smile, perfectly suited for being a real estate agent.

Bart (Nancy Cartwright) faces a tough test at school when he gets a new teacher, Mr. Lassen (guest voice Willem Dafoe), who vows to crush his spirit.

The precinct goes into lockdown mode on Thanksgiving night, and Jake, who was left in charge, is confident he can keep spirits high, while avoiding chaos. Amy is less certain, as things spiral out of control.

On the night before Thanksgiving, Brian and Peter drunkenly devour the holiday bird, and then must go out to find a replacement. In Peter’s absence, Chris (Seth Green) attempts to become the man of the house.

When Jane starts dating a marine, John and Motif (Seaton Smith), feeling guilty for their lack of service, try to sign up for a USO Comedy Tour. Meanwhile, Lou recounts how war – and improv – are hell.

In an encore of the landmark 550th episode, Homer wakes up in a world where his family and everyone in Springfield are made of Legos.

When Linda (John Roberts) and the kids decide to spend Thanksgiving morning at the First Annual Wonder Wharf Turk-tacular Turkey Town Festival, Bob (H. Jon Benjamin) boycotts the holiday and takes the day off from cooking. But the festival turns into a nightmare when the poultry turns nasty.

Homer has a mid-life crisis after Moe’s shuts down and Moe (Hank Azaria) takes off on a trip with King Toot (guest voice Will Forte). When Homer takes up the bass guitar and forms a cover band with some of the other dads in town, their modest early success is soon overwhelmed by the breakout potential of their most unlikely star: Apu (Azaria). Sammy Hagar makes a guest-voice appearance.

Motif gets “Carrie’d” away and relies on his three girlfriends for support when he learns that John and Jane will not add him to the apartment lease. Meanwhile Lou’s audience plant demands a contract.