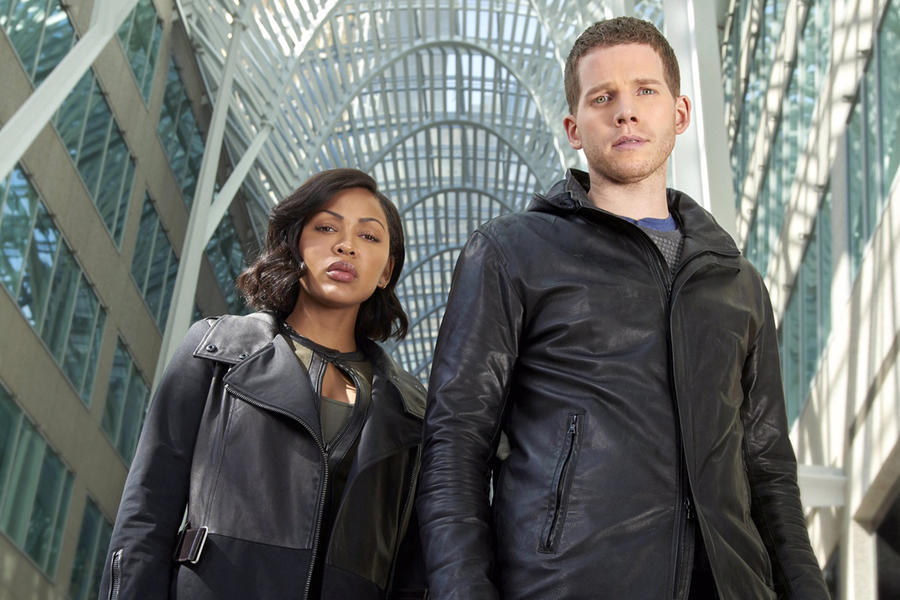 Dana Walden and Gary Newman, Chairmen and CEOs, Fox Television Group, today unveiled the FOX primetime slate for the 2015-2016 television season to the national advertising community during its annual Programming Presentation at the Beacon Theatre.

“Building on the phenomenal momentum created by GOTHAM, THE LAST MAN ON EARTH and, of course, EMPIRE, we’re infusing next season’s schedule with new ambitious dramas, smart comedies, aspirational unscripted series and big live events and specials – all from the best creators in the business,” said Walden and Newman. “And our strategy with these bold creative swings is simple: schedule them strategically, market them relentlessly and create events that break through and captivate viewers across every platform.

Tuesdays are all-new this fall on FOX, with new comedies GRANDFATHERED and THE GRINDER, followed by killer comedy-horror series SCREAM QUEENS.

The new comedies kicking off an all-new Tuesday are GRANDFATHERED and THE GRINDER. A comedy about coming of age – at any age – GRANDFATHERED stars John Stamos (“Full House,” “ER”) as the ultimate bachelor whose life is turned upside down when he discovers he’s not only a father, but a grandfather. THE GRINDER, starring Emmy Award nominee Rob Lowe (“Parks and Recreation,” “The West Wing”) and Emmy Award and Golden Globe Award nominee Fred Savage (“The Wonder Years”), follows a famous TV lawyer (Lowe) who, after his hit series, “The Grinder,” is canceled, moves back home and joins his brother (Savage) at their family’s real-life law firm – despite having no formal education, no bar certification, no license to practice and no experience in an actual courtroom.

Award-winning executive producers Ryan Murphy (GLEE, “American Horror Story”), Brad Falchuk (GLEE, “American Horror Story”) and Ian Brennan (GLEE) meld comedy, mystery and horror in SCREAM QUEENS. All hell is about to break loose for the Kappa House sisters of Wallace University when a murder takes place, exactly 20 years after a mysterious death originally rocked their college campus. The super-charged anthology series is a modern take on the classic whodunit with a killer cast, including Emma Roberts (“American Horror Story: Freak Show,” “Scream 4”), Jamie Lee Curtis (“Halloween,” “A Fish Called Wanda,” “True Lies”), Lea Michele (GLEE), Oliver Hudson (“Nashville,” “Rules of Engagement”), Keke Palmer (“Akeela and the Bee,” “Masters of Sex”) and guest stars Ariana Grande and Nick Jonas (“Kingdom”), among others. With at least one casualty each week until the mystery is solved, anyone could be the next victim – or the murderer.

Two new dramas – the futuristic MINORITY REPORT and the Miami-set ROSEWOOD – debut this fall. Based on Steven Spielberg’s international blockbuster film and the first of his films to be adapted for television, MINORITY REPORT follows the partnership between a man (Stark Sands, “Inside Llewyn Davis”) haunted by the future and a cop (Meagan Good, “Think Like A Man” franchise, “Californication”) haunted by her past, as they race to stop the worst crimes before they happen.

Also joining the schedule this fall is ROSEWOOD. From executive producer Todd Harthan (“Psych,” “Dominion”), ROSEWOOD stars Morris Chestnut (“Nurse Jackie,” “The Best Man” franchise) as DR. BEAUMONT ROSEWOOD, JR., a brilliant private pathologist who uses wildly sophisticated technology and his drive to live life to the fullest to help a tough-as-nails detective (Jaina Lee Ortiz, “The After”) and the Miami PD uncover clues no one else can see.

In 2016, additional new series joining the schedule include devilish drama LUCIFER and modern action series THE FRANKENSTEIN CODE; and two comedies, THE GUIDE TO SURVIVING LIFE and animated BORDERTOWN.

Based on characters from DC Entertainment’s Vertigo imprint, LUCIFER stars Tom Ellis (“Merlin”) as the charming, charismatic and handsome-as-hell original fallen angel, who, bored and unhappy in Hell, takes refuge in Los Angeles, where he uses his gift of persuasion to punish bad guys. But the longer he’s away from the underworld, the greater the threat that the worst of humanity could escape.

In THE FRANKENSTEIN CODE, from executive producer/writer Rand Ravich (“Life,” “Crisis”) and executive producer Howard Gordon (“Homeland,” “24”), a disgraced, 75-year-old ex-sheriff, whose life ends at the hands of corrupt cops, is brought back to life and given a second chance by a pair of young tech scientists, as a 35-year-old (Rob Kazinsky, “True Blood”) with unpredictable near-superhuman abilities.

NEW GIRL will return to Tuesdays in January, for its first-ever season of virtually uninterrupted originals. These weekly all-new episodes will platform THE GUIDE TO SURVIVING LIFE, the new young ensemble comedy about a group of friends living together for the first time. Each episode is told from the perspective of COOPER BARRETT (Jack Cutmore-Scott, “Kingsman: The Secret Service”), a wickedly charming and deeply flawed recent college grad whose life is filled with terrible choices, excellent mistakes and fantastic misadventures.

A new animated comedy from FAMILY GUY’s Mark Hentemann and Seth MacFarlane, BORDERTOWN is a satirical look at the cultural shifts taking place in America. Exploring family, politics and everything in between with a cross-cultural wink, the series centers on two very different families living in a fictional Southwest desert town on the U.S. – Mexico border.

AMERICAN IDOL will begin its 15th – and final – season this January on FOX. A season-long celebratory event, AMERICAN IDOL XV will feature host Ryan Seacrest and judges Jennifer Lopez, Keith Urban and Harry Connick, Jr., as they search for the final IDOL superstar and pay tribute to the past 14 seasons of amazingly talented contestants and the millions of fans who tweeted, texted and championed their IDOLs.

Following are the FOX fall 2015 primetime schedule, as well as social media information for and synopses of the new series: