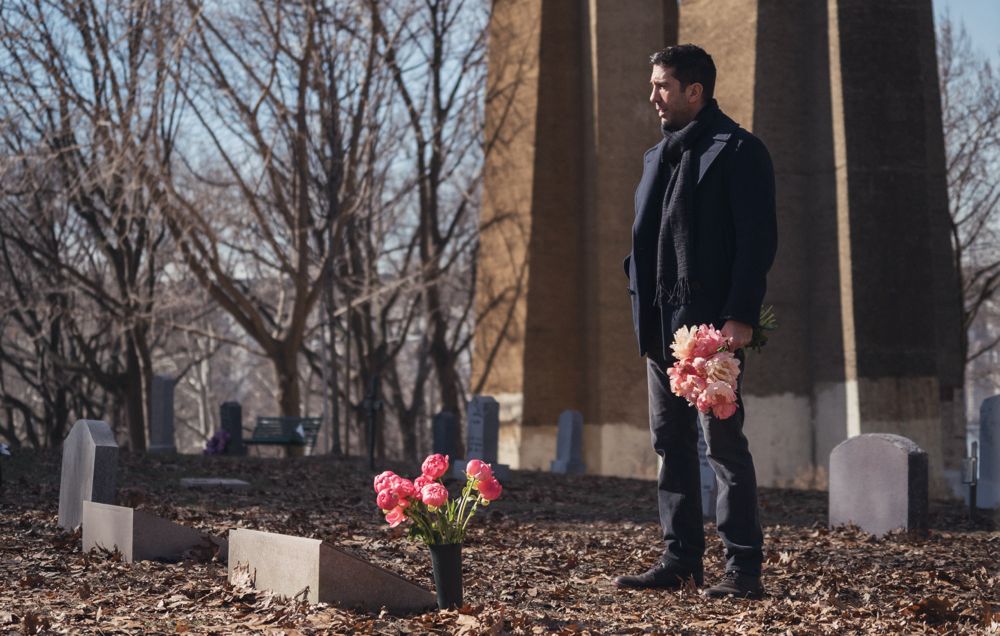 I’m used to automatically loving pretty much any series that premieres on AMC. There are exceptions, Turn being one of them, but few, with the network definitely one of the top three for original content right now (along with HBO and FX). The newest offering, FEED THE BEAST, doesn’t equal the best of AMC, but it’s not a total dud.

The story of FEED THE BEAST revolves around two best friends. Tommy Moran (David Schwimmer, Friends, American Crime Story) is a single father who just cannot get past the loss of his wife, Rie (Christine Adams, Agents of S.H.I.E.L.D.). What this means is he’s struggling to help his son, TJ (Elijah Jacob), who hasn’t spoken since witnessing his mother’s death, and Tommy, a sommelier by trade, has made wine his abusive crutch. His pal, Dion Patras (Jim Sturgess, 21, Across the Universe), is fresh out of jail after burning down a mobster’s restaurant. Said mobster, Patrick “The Tooth Fairy” Woijchik (Michael Gladis, Mad Men), is willing to give Dion a chance to make it up to him, providing Dion stays in town and starts paying.

And so, Dion convinces Tommy they should open the Greek restaurant they’ve always dreamed of, despite the fact that Tommy doesn’t want to do it without Rie. This is a second chance for them both, one that gets off on shaky footings and lies, but one they both need with a partner they, for better or worse, trust. And a threatening presence in the shadows wants them to succeed for his own reasons.

FEED THE BEAST is not exactly breaking new ground. How many series have we seen that a good-hearted criminal is blackmailed into doing something and lies to a friend to get help doing it? Even the extra complexities tossed in, Tommy having to approach his estranged father, Aidan (John Doman, Gotham, The Affair), for financial help, and a woman at grief counselling, Pilar (Lorenza Izzo, Knock Knock), clearly not being who she says she is, are tropes at this point. If you watch any amount of complex cable dramas, you’ve seen this before.

Yet, the acting and direction is good enough to overlook that, at least initially. The dark tone and messy dwelling full of expensive restaurant gear is cool. Schimmer knows how to play whiny and messed up, so he fits the character well. Sturgess does crazy with aplomb, and his druggie ex- and current con is nothing of not eccentric. Alone, they both excel.

Where it doesn’t hold up for me is how it all comes together. FEED THE BEAST has a lot of good elements, from its stars to the production design, but they don’t feel like a wholly authentic world when joined. Dion comes across as too crazy for Tommy to be so trusting of. Tommy comes across as too screwed up to still be functioning as well as he is, holding a job, even if it’s not the one he wants. The relationship between the two doesn’t feel realized, Tommy being happy to see Dion one minute and angrily accusing him of things the next. The chemistry between them just isn’t there.

So what we’re left with is a decent show with some really great elements that ends up being a little less full and cohesive than what I’m looking for. Some of this could just be early episode stumbling, but that sort of thing is a lot more common on the broadcast networks, that rush through a hectic schedule, than the cable dramas, which tend to take their time, so it’s harder to chalk it up to that. It’s good enough that I’d like to keep watching, but not good enough that I’m committing to the season. Yet.

FEED THE BEAST premiered last night, and settles into its normal slot Tuesday at 10/9c on AMC.