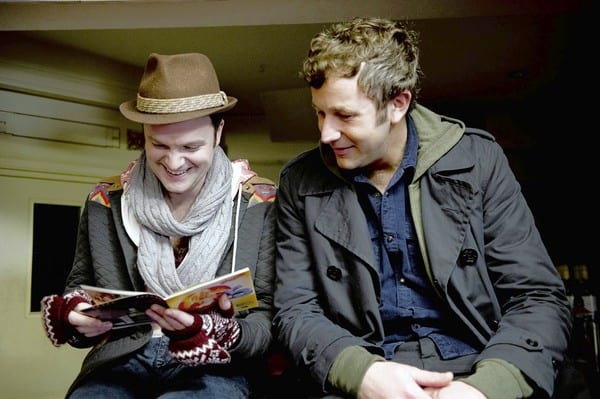 Many are familiar with the work of Christopher Guest, who has made such fantastic mokumentary films as Best in Show, A Might Wind, and This Is Spinal Tap. It’s about time, then, that he gets a weekly series on television. FAMILY TREE, which premiered on HBO last night, is that series.

Set in London, England, FAMILY TREE stars Chris O’Dowd (Bridesmaids, Girls) as Tom Chadwick, an unemployed, heartbroken man in his thirties who inherits a box of bits and bobs from his great Aunt Victoria. In that box are mementos from his family’s history, which he will make his mission to dive into and discover his roots.

It’s a simple premise, to be sure, and one that many can relate to. We’ve all had times in our lives where we lack direction and need to figure out our purpose. Many choose to examine the past to find clues as to a possible future. Tom is easy to relate to and sympathetic in his journey, wonderfully brought to complex life by O’Dowd.

Tom has help in his journey in the form of best mate Pete Stupples (Tom Bennett, PhoneShop), who lives in the past, but in a bad way. Whereas Tom seeks meaning and enrichment from his own history, Pete wants to maintain a silly, sex-obsessed, immature existence as long as he possibly can. He’s also the type of friend to latch onto a person and never let go, whether the other person wants them there or not. Tom is in exactly this position with Pete.

I’m not saying Tom should ditch Pete, even if Tom is a much more likeable person. They have a lot of shared stories together, and Pete is a nice enough bloke, certainly loyal. He provides the comic relief to the more serious Tom, which is probably why Tom doesn’t mind having him around so much, for laughs.

In the pilot, “The Box,” Tom and Pete take an old military photograph to expert Neville St. Aubrey (Christopher Fairbanks, Pirates of the Caribbean: On Stranger Tides) to examine. Tom at first believes that the man shown is his great grandfather, but Neville is able to discover that Tom’s relation is the photographer, not the subject, and in finding a photo of said great grandfather, Tom learns he is descended from a “Chinaman.”

If that amuses you, you will likely enjoy the humor exemplified in FAMILY TREE. It’s in a similar vein to other Guest works, silly and irreverent, but toned down a bit here, not so in-your-face as some of his movies have been. Many of the jokes are quiet, though unexpected, the nuance taking precedence over the slapstick. It’s a very specific brand, well executed.

There’s also an underlying level of sadness to the proceedings of “The Box.” Obviously, Tom is not doing so well, with little going right in his life. As positive as he tries to be about it, one can sense that any bit of optimism displayed may just be a coping mechanism. He’s had about all he can take, and only through embarking on a new adventure, learning about his heritage, can he get a foot hold and begin to pull himself back up.

Yet, Tom is not the saddest character introduced in “The Box.” That honor belongs to his sister, Bea (Nina Conti, Bromwell High), who walks around with a monkey puppet on her arm. Unlike Tom, who was raised in Ireland by their mother, Bea was subject to father Keith’s (Michael McKean, Clue) inept, unobservant style of parenting. Bea clings to the monkey as a way to find her voice, and thus is quite a depressed, and depressing, person. I look forward to learning more about her, and how she might be inadvertently helped by Tom’s work.

Somehow, Guest rings the humor out of such people, whether it be in interactions between the various characters, the situations they get into, or cut scene interviews with the players. There is always something to find amusing, even in the darkest bit of the half hour, and it is played to great effect.

Besides McKean, other frequent Guest veterans will appear in the series, including Ed Begley Jr. and Fred Willard. Guest has built his own stable of actors over the years, and although they are not the focus in his latest project, he certainly isn’t abandoning them, either. They get his tone and style perfectly, and will only enhance FAMILY TREE in their recurring appearances.

I like FAMILY TREE a lot. It has the distinctive Guest feel, but also comes across as fresh and original. There isn’t really another series on television to compare it to, at least not in anything but broad strokes, taking a simple story and telling it in a very unique manner. If it can find an audience, and it is certainly accessible enough to do so, it should make a great addition to the HBO lineup.