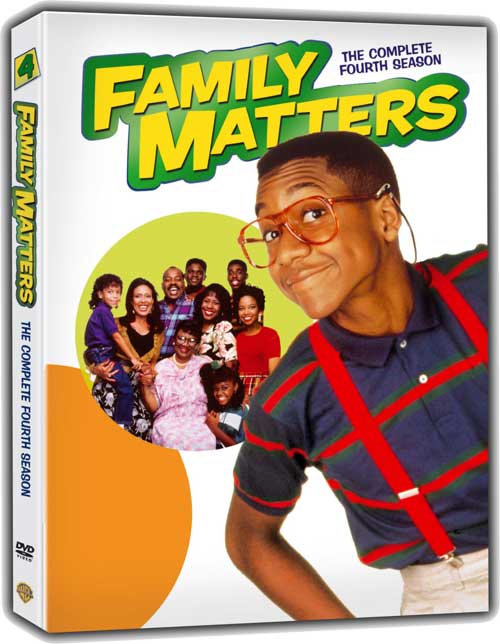 Seat42f and Warner Bros. Home Entertainment have teamed up to give THREE lucky winners a copy of FAMILY MATTERS Season 4 on DVD. For a chance to win leave a comment below telling us why you want to add FAMILY MATTERS Season 4 to your DVD collection. Only one entry per person. Contest ends February 18th. Winners will be notified on February 19th via email so make sure to use a valid email address when you post your comment.

One of TV’s favorite nerds, Steve Urkel (Jaleel White), is back to entertain viewers with the release of Family Matters:  The Complete Fourth Season available in stores February 4, 2014 from Warner Bros. Home Entertainment (WBHE). Join the beloved Winslow family and their hilarious, geeky neighbor, Steve Urkel, in a set of 24 delightful episodes from the hit ‘90s series’ fourth season.  Family Matters: The Complete Fourth Season will retail for $29.98 SRP.

One of the most touching and memorable comedies to emerge from the 1990s, Family Matters centers on the lives of the Winslows, a multi-generational, middle-class suburban Chicago family and their geeky, teen next door neighbor who is hopelessly smitten with  their daughter.

In the fourth season of this enormously popular series, life lessons and laughs go hand-in-hand with the Winslow family and their ever-present neighbor. Steve gets a girlfriend, Myra, (Michelle Thomas, The Young and the Restless) after she manages to successfully woo Steve with her accordion. Carl (Reginald VelJohnson) and Steve compete on American Gladiators in hopes of settling a dispute. Steve literally glues himself to Laura’s (Kellie Shanygne Williams) side…as her dream date is on his way over! Sick of being the only one doing the housework, Harriette (JoMarie Payton-France) goes on strike.  Eddie’s (Darius McCrary) math teacher (Debra Jo Rupp, That ‘70s Show) decides to stop by.  These and several other hilarious episodes promise to captivate viewers of all generations. Whether it’s hilarity on Halloween, a comical crisis on Christmas, a veritable “va-va-voom!” on Valentine’s Day or a memorable moment on a Monday, every day can be a good day with Family Matters.

“Family Matters became an enormous success because it featured an exceptional cast and relatable storylines that made an impact on its audience. It’s a funny and uplifting series which continues to appeal to viewers of all ages years after its original run,” said Rosemary Markson, WBHE Senior Vice President, TV and Special Interest Marketing.  She added, “We are very pleased to offer consumers another season full of laughs and heart.”

Family Matters originally began airing in 1989, where it was part of ABC-TV’s Friday Night TGIF lineup, and it ended its run in 1998. The series ran for nine successful seasons and was nominated for an Emmy® Award in 1996.