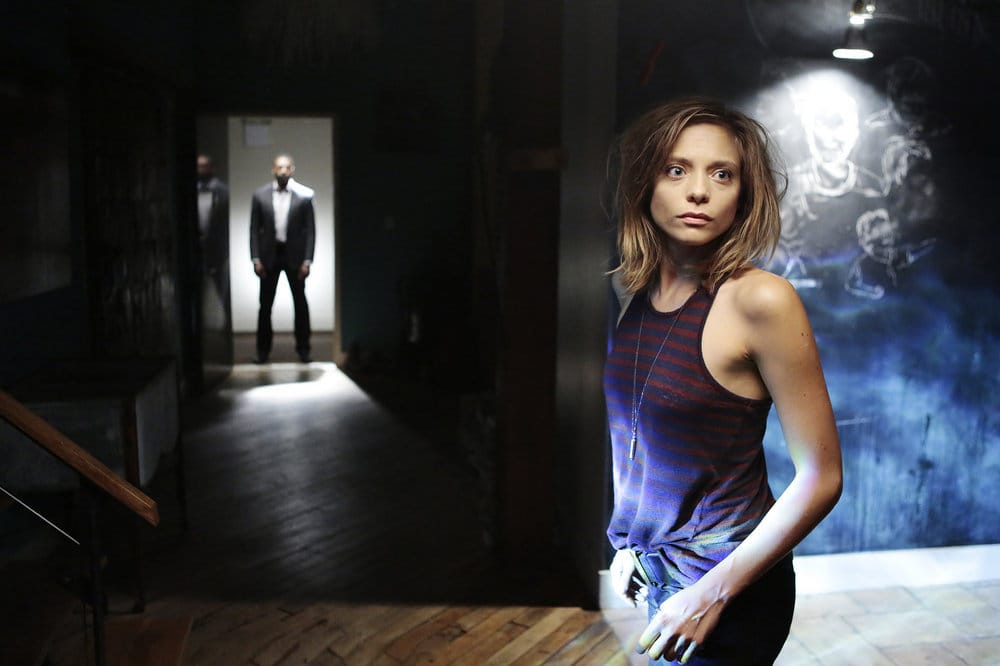 Following the critically acclaimed, ratings-challenged Mr. Robot, USA seeks to copy that, um, I guess you could call it success, with the new, trippy FALLING WATER. (That was not a knock on Mr. Robot, which I love, but a musing as to why a network wants to replicate a show that almost no one is watching.) Like Mr. Robot, FALLING WATER is high-concept drama that blurs the lines of reality and attempts to build a mysterious mythology that will spark much debate and predictions. But it is definitely a whole different show in a lot of ways.

As episode one begins, we meet three separate protagonists, each with their own pain. Tess (Lizzie Brochere, Versailles, American Horror Story: Asylum) is a trend-spotter who believes she may have had a child, though most people think she’s crazy. Burton (David Ajala, Black Box, The Dark Knight) is a fixer who has lost the woman he loves (Anna Wood, Reckless). Taka (Will Yun Lee, Hawaii Five-0) is a cop whose mother (Jodi Long, Sullivan & Son) is in a coma.

The connections between this trio are not immediately apparent, but it isn’t long before it’s explained to us. They are having very vivid dreams, or rather, pieces of the same dream, and if their experiences are combined, they could herald a very real danger.

To this end, the cast includes Bill Boerg (Zak Orth, Revolution, Wet Hot American Summer) and Woody Hammond (Kai Lennox, Legit, Beginners). Woody is bad news, jumping between dreams, and definitely seems like he can’t be trusted. Bill may be no less noble, a tech guy clearly wanting to profit based on his dream research, but at least he’s offering to help Tess in exchange for her assistance. So these are our shady peeps who pull the threads together.

Unfortunately, they don’t pull them together all that well. I’m not complaining about either character, or any of the cast; they all do a pretty good job, it seems to me, at least in episode one. Instead, my problem is that the series is boring, confusing, and I have no confidence that it is going anywhere neat. Granted, I’ve only viewed one episode, and plenty of great shows have poor pilots. It would just take a lot to come back from this one.

I give the series credit for not going procedural. I mean, they have a cop as one of the main characters, so I expected them to do so, but the plot seems completely serial instead. But it’s more a lack of cohesiveness and engagement that hurts it. We don’t get to know any of the characters very well before we’re distracted by all the dream stuff. And the dream stuff isn’t obvious, with viewers sometimes left wondering if what they’re seeing is reality or not.

Don’t get me wrong, on paper this sounds like a show I’d be totally into. I dig a cool premise that tells a new tale. Sure, it has similarities to Mr. Robot and Netflix’s Sense8, but FALLING WATER is far from a copy of either. Tess’s career of being the reclusive woman who sees patterns before anyone else makes sense for someone who sees the world a little more than the rest of us, and I can even extend a similar trait to the cop, as even though I’m burnt out on cop shows, it makes sense to use one here.

However, the execution leaves much to be desired, seeming more messy than anything, and not well thought or mapped out. I don’t know where things are going, and because of the haphazard way elements are introduced, I’m not sure the writers do either. More importantly, I don’t care to find out because I’m not drawn to any of the characters, who all seem like they could be bad people. (They could also be good people, it’s just not clear.) Even the title isn’t explained.

That’s just too much confusion for a series that doesn’t seem, on its face, worth the effort. There has to be some hook to bring people back, and there’s not in this one.