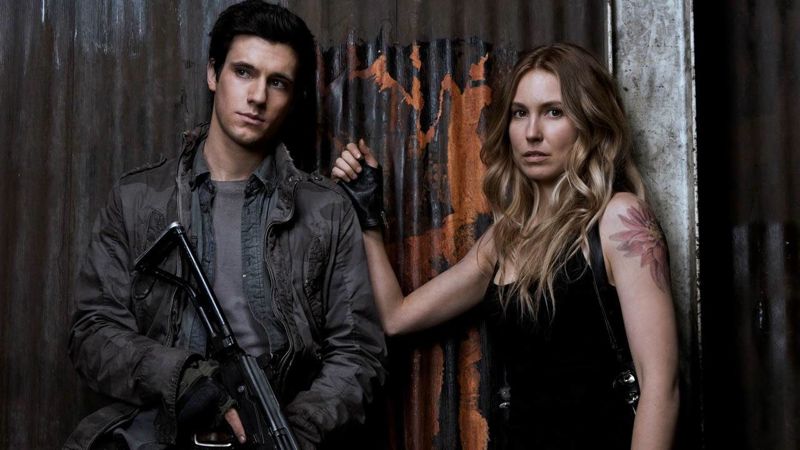 Returning for Season 5, TNT’s drama FALLING SKIES picks up right where Season 4 ended, with the fate of Tom Mason (Noah Wyle) in question after he and his hybrid-daugher Lexi (Scarlett Byrne) took off on a suicide-mission to destroy the Espheni  power core and whether the 2nd Mass fully survived the attack by the alien-coordinated attack — and if they did, are they still capable of continuing the fight without further resources.

While attending this year’s WonderCon in Anaheim, the cast of FALLING SKIES offered some insight as to the tribulations and trials that our heroes will encounter in the shows fifth and final season:

As teased, the Season 4 love-triangle between Maggie (Sarah Carter), Hal (Drew Roy) and Ben (Connor Jessup) still lingers as Maggie tries to sort out her conflicted feelings after having some of Ben’s harness spikes surgically implanted in order to walk again; Tom Mason’s ultimately survival and fate is up in the air; and the 2nd Mass has worries immediate worries of food shortages and weaponry difficulties ahead.  Only one thing is certain:  the Overlords are not going to be backing down any time soon, even without the power core, and the other varieties of Espheni minions continue to be a nasty combined-enemy to fight.  As if Skitters, Mechs, eye worms, flying creatures and the like were not enough, there is still one or two new breeds of alien creatures to be discovered and fought this season.

To see how the final battle for Earth unfolds and whether the 2nd Mass and their Volm friends have a fighting chance, be sure to tune in for the premiere of Season 5 of FALLING SKIES on Sunday, June 28th at 10 p.m. on TNT.  The final fight is not over and there is a long, bloody road ahead for our heroes.