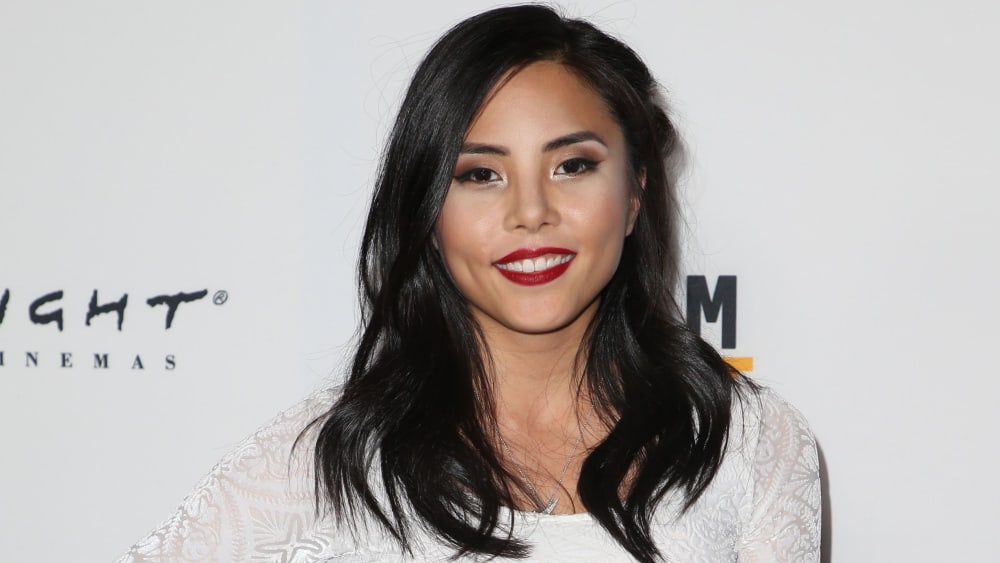 By far, one of the stand out series of 2018 is the new YouTube Red drama series YOUTH & CONSEQUENCES. The series focuses on Farah Cutney, a “queen bee” who strategically pulls the power strings of her high school to create a female-empowered student government and social structure. Best of all, Farah is a force for good. With the sublime casting of YouTube sensation Anna Akana, YOUTH & CONSEQUENCES is an enthusiastic addition to the era of prestige television — although most new TV shows are found on non-tradition TV platforms in the streaming arena. YouTube Red smartly launches the powerful and timely YOUTH & CONSEQUENCES at a time when the youth of our world are capturing our attention and claiming their power. While attending the Television Critics Association Winter 2018 tour, we had the chance to chat with star Anna Akana about her new series YOUTH & CONSEQUENCES making its debut on YouTube Red. In an exclusive interview, Anna previewed YOUTH & CONSEQUENCES and the appeal of centering the show around the social issues of today’s high school youth.

How were you recruited to be a part of this project?
ANNA: My manager sent me Jason’s [Ubaldi] original script, which was called “High School Rules,” which I was like, “Okay. That’s a weird name.” But I read it. All the episodes were actually very, very true to the script that I read. I just fell in love with it. It was so smart and you’re like, “Oh my god!” You think she’s a “mean girl,” but she’s actually not. I’ve never seen this perspective in high school because usually everything feels so clichéd, but I fell in love with Farah. So we went around and we pitched it and YouTube was like, “Hey, we love this!” They were great to work with because they were creatively hands-off, so we got to really do the show that Jason saw.

Susanne Daniels is super smart about finding and cultivating good content.
ANNA: Yeah. I love her. She was so supportive the entire time and was just like, “You make your show. We love this. You have the vision. Go for it.”

What about the character of Farah really appealed to you? How would you describe her and what did you love?
ANNA: Have you watched SCANDAL? She reminded me of Olivia Pope, Hillary Clinton, Nancy Drew and Veronica Mars all kind of mashed together as one. But also with the fierceness of not wanting anyone to know how good she actually is — liking the power and knowing the use of having the persona of a “mean girl.” I thought that was so complex and interesting. I felt like with Farah, you never fully understand exactly where she’s coming from, so that really appealed to me. She also has a very dysfunctional home life that’s revealed throughout this season while she’s trying to fix all this other stuff that really makes her a vulnerable, beautiful girl trying to have it all together.

Farah seems a little wise beyond her years, which is unusual for a high schooler.
ANNA: Yeah, exactly, but I love that. I love that she was trying to control her universe and was really smart, but also doesn’t necessarily have all the right answers, but is still trying her best.

Like she fixes an entire school election just for a bathroom, which is remarkable, and it wasn’t even for her.
ANNA: I love that. I loved that story.

Farah also has an unusual sensitive-side. Like she’s got a bit of altruism about her, which is kind of unusual for a high schooler.
ANNA: Yeah, she is very justice-oriented, even though you don’t see it at first.

Farah’s also got this interesting relationship going on with her friend, Colin (Sean Grandillo). At first, we get the impression they’re not close at all, and then we find out they’re working together very closely actually. Maybe you could describe a little bit about that relationship?
ANNA: The story is that — because his last name’s Cowher and my last name’s Cutney — we’ve been next to each other in class or with our lockers since fifth grade, and just by nature of having kind of similar last names and this friendship — though private from the entire world — is actually the deepest friendship she has with anyone. Colin’s the one person she feels like she can actually let her guard down in front of or talk to her family about. There’s a lot of sexual tension there, because he’s obviously in love with her, but it’s hard for her to ever really see him in that role.

Farah also has an interesting high school clique that she’s involved with. But I am not sure she has real friends. These are people she uses very strategically. Thus, I wasn’t sure that she even opens up to her friends so they even know who she is.
ANNA: I think she doesn’t necessarily open up to them as much as they would like and probably she has this sense of guarding herself and her secrets, because she knows knowledge is power, but she’s incredibly loyal to those friends. Yes, she manipulates them or utilizes their skills when she needs them, but if anyone crosses them, you’re fucked. Like with Sara Hurley (Katie Sarife), in I think the third or fourth episode, the girls’ soccer teams and lacrosse teams and track team get cut. The funding for them is just like, “Oh, you’re gone,” and Hurley is very big in the sports world, so Farah steps up and is like, “Where’s the money? Why can’t girls play and the boys can still play?” and kind of outs the people behind the scenes who made that happen.

What do you think spurned Farah into this position where she feels like she needs to be the person who advocates for everybody else?
ANNA: I think it comes from the fact that she’s an only child. Her father was also a big PR guy. So he always taught her that you can control the narrative — your thoughts create your reality and your will can be brought into reality if you try hard enough. I feel like she’s this girl who really does believe, “I can make anything happen and if I can make anything happen, I’m going to make the reality that I want to happen happen,” and therefore feels a sense of responsibility to take care of other people. I also think even though she doesn’t show it, she’s just incredibly empathetic to people who are the underdogs or people who have been slighted because she herself when she feels slighted has a sense of powerlessness, so if she can control and help someone else, it gives her a lot of pleasure.

It’s just interesting. Again, it’s unusual for a young person to take on that power and want to then utilize it in a good manner.
ANNA: Yeah, but she doesn’t always do that. Sometimes it’s a self-serving purpose. But I think, ultimately, she’s driven by really good intentions.

YOUTH & CONSEQUENCES is, surprisingly, a female-empowering show. Everybody’s trying to describe it as the modern take on “Mean Girls,” which was kind of de-powering for women, but I thought when I watched it that the women characters were reaching for something and attaining something— and they were actually utilizing each other to do it, which was unusual.
ANNA: Yeah, which is awesome.

It is. Maybe you talk about how that might have attracted you a little bit to the show?
ANNA: Yeah. I mean, I loved the idea that it was a female ensemble in which women weren’t tearing each other down. We were building each other up. Even in the first couple episodes, she builds Grace Ho (Piper Curda) up to be the president of the school because she’s like, “Well, you’re a puppet, so I can manipulate you. But you’re also good and you will be good for this school and you’re a relatable girl that other people can get behind. You have such a moral compass that you’re going to act out in a way that I deem fit.” I don’t know if you remember the scene where they’re making up Grace Ho and Farah talks to her about using her breasts as a tool. There is so much sex-positive and body-positive stuff that I just never got to see in high school. Everyone was always like, “Cover up or if you don’t, you’re a slut,” and for Farah to be like, “No. This is a tool that I have and it’s my femininity and it’s my sexuality. I can weaponize that if I want to and if I want to, I’m going to.” I was really attracted to the idea that we were putting out this message of, “There’s no right way to be, as long as you feel empowered.”

It is a nice difference —that these women are being taught it is okay at any age to dress the way you want and express yourself and feel attractive and be proud of that.
ANNA: Absolutely.

Let’s talk about the mystery man: Will (Brando White). What do we know about him? What will we find out about him?
ANNA: We don’t know much about him until the very end of this season. But he and Farah were very on-and-off her entire time in high school. He was a senior, so he just graduated and is in college now. They keep in touch, but in terms of closeness, he’s not as close as any of her other people.

Is Farah going to have any romantic relationships during the season or is Will the man that she’s kind of holding out for?
ANNA: That’s kind of the man she’s holding out for and it was a very conscious choice not to necessarily have a big love interest, at least in the first season, because we wanted Farah to really focus on her missions and what she needed to do and a love interest was more of a “B” story. She has too much on her plate.

Which characters would you like to say we need to keep an eye on, besides Farah, of course?
ANNA: I’d say definitely keep an eye on Hook (Moses Storm). He’s going to come into play pretty significantly and there’s a character that wasn’t necessarily introduced in the first and second season, but he’s hinted at, who is the techie of the school. He’s kind of mentioned. He’s going to play a huge pivotal role at the end of the season.

To see Anna reign supreme as Farah as she conquers high school and makes it a better experience for all, be sure to tune in for the premiere of YOUTH & CONSEQUENCES on Wednesday, March 7th on YouTube Red where all episodes of Season 1 will be available for binge-watching. For fun clips and information about the show, you can follow the show on Twitter @YandCShow. Then to follow what Anna is up to as her career grows, be sure to follow her on Twitter @AnnaAkana and at her YouTube channel: https://www.youtube.com/user/AnnaAkana