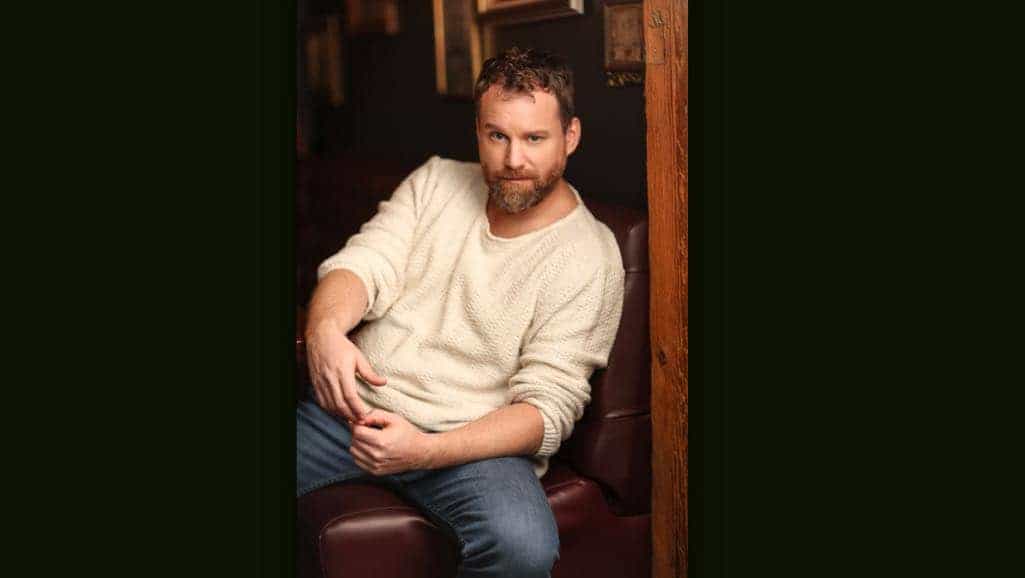 If you think you have seen Patrick Gilmore before, it is probably because you have. With a long and varied array of appearances ranging from SGU STARGATE UNIVERSE to THE KILLING to GRACEPOINT and YOU ME HER, Patrick Gilmore has been making a steady working career on television.  In a recent exclusive interview, Patrick Gilmore talks about his latest project, the Canadian drama series TRAVELERS, which makes its premiere on Netflix just in time for Christmas.

What initially drew you to the role of David Mailer in the Netflix series TRAVELERS?
PATRICK:  Brad Wright wrote the role of David for me, so the moment I read the script I knew this guy.  I knew his cadence and his motives. Natural dialogue is a hard thing to write, and it’s where Brad excels.

How would you describe your character David?  What do you most admire and/or like about him?
PATRICK:  David is an optimist. His job and his relationship with Marcy all point to him believing the best in people. I’m a cynic. I’m consistently disappointed by humanity.  I wish I had David’s attitude and outlook.

What journey does David undertake in the series?
PATRICK:  Ever read the book of Job in the Bible? Ok, maybe not that extreme, but his journey in season 1 tests his faith in everything he believes in.

What is his relationships to his fellow Travelers?
PATRICK: David’s connection to the Travelers begins with Marcy, played by Mackenzie Porter. He’s the social worker of the person Marcy “travels” in to. I don’t want to give too much away, but David’s relationship with her has to change and it causes more problems than he knows how to deal with.

What was it like working with Eric McCormack, Mackenzie Porter, Jared Abrahamson, Reilly Dolman and Nesta Cooper?
PATRICK: These are 5 of the strongest actors I’ve ever worked with. But it never felt like work. It was a group of friends meeting up every day to play make believe. We all became fast friends and fast fans of each other.

What was your favorite part about working on this project?
PATRICK: The crew. I can’t say enough about the multitude of people that worked on this show behind the scenes. I was humbled by their work ethic every day.

What was the one thing you took away from working on TRAVELERS?
PATRICK: During TRAVELERS, I remembered how much I love time travel stories. I attempted to watch as many TT shows as I could find and will watch any TT show someone recommends. Here’s a few of my suggestions: Quantum Leap, BTTFs, Donnie Darko, Primer, Groundhog Day, Time Bandits, Star Trek IV. We could be here for hours. No, YOU cried for 2 days after watching About Time (2013)!

What do you hope viewers take away from watching it?
PATRICK: I just want people to have a blast watching it. If binge watching tends to release all of your endorphins, TRAVELERS is a show for you. But no “Netflix and Chill.” Focus people!

At this stage of your career, what do you think you have learned from the amazing variety of roles and projects you have worked on?
PATRICK: That there is still more I want to do…

Then what are the perks of where you are in your career right now?
PATRICK: I’ve worked enough now that I can now look back on what I’ve done and see a change and learn. In the beginning it was a lot of guess work.

If there were one role you would like to revisit, which would it be and why?
PATRICK:  Hands down, Tom Drexler from THE KILLING. I really feel like there was no end to his debauchery.

Has there been any great advice you have gotten?  What advice would you offer to other upcoming and aspiring actors?
PATRICK: I’ve had so many people influence my direction and inspire me, it’s hard to sum it all up. But one thing that keeps a fore under my ass is, stop talking about it. Do it. No one is going to discover you, so get out there and take it.

Are there other upcoming projects that you can share that fans should keep an eye out for?
PATRICK: If you haven’t watched the Audience Network show YOU ME HER yet, you have to. I play a small role as Shaun, the bartender. We just wrapped Season 2 and it was such a creative and collaborative set. Plenty moments of me making an ass of myself.

What do you aspire to do next?
PATRICK:   Everything. What have you got?

To see what wicked fun and game and mysteries are to had, be sure to tune in for the Netflix release of Season 1 of TRAVELERS on Friday, December 23rd and then be sure to catch the Season 2 premiere of Audience Network’s YOU ME HER when it returns February 14th (Valentine’s Day) in 2017 on DirectTV.