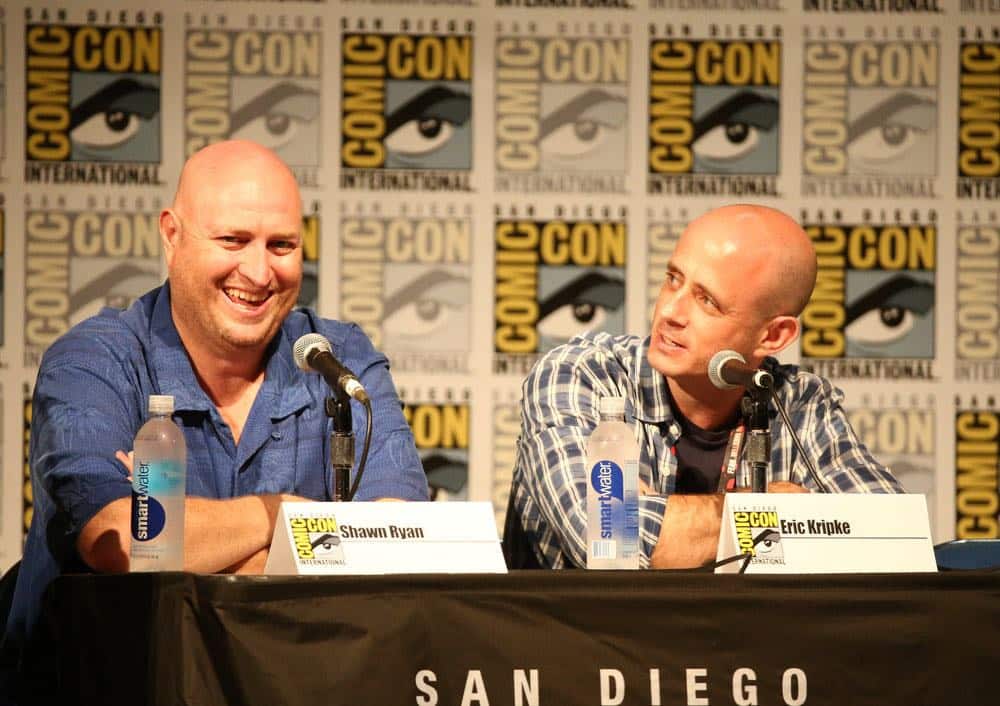 This October, NBC will premiere TIMELESS. Created by THE SHIELD’s Shawn Ryan and SUPERNATURAL’s Eric Kripke, the series follows a historian, soldier and scientist as they travel through time trying to stop a man on a mission to ruin everything we know about America history.

I had a chance to catch up with the powerhouse showrunning team behind the series to talk about its origins, the ratio of well known to unknown historical events we’ll see on screen and the sheer amount of time travel currently flooding the airwaves.

So how did you two come together on this?
Shawn Ryan: Well, I got a call or maybe an email. I get approached about pitches a lot, but usually they’re lower level writers looking to create their first show. I was very aware, I’d never met Eric, but I was very aware of his success in the TV business. I thought, “that’s odd… he certainly doesn’t need me, why would he be interested in pitching to me?”
I was like sure, okay. Eric himself called and we got together. Essentially, he had the beginnings of the idea that turned into TIMELESS. What we both realized was, this job is so hard and we both kind of had success on our own, might it not be better to share the burden a little with somebody who had been through the wars themselves? We spent three or four days in a writers room talking about the idea and fleshing it out and seeing if there was truly an idea there. I think, most importantly, just working together to see if we could mesh as partners. We ended up meshing pretty well and liking each other and liking the idea, and then we went out and pitched it. That’s how we got together. I think it was purely an act of self preservation, because showrunning is such a killer job that it was like, what if we did this together?

Are you guys shooting for a 22 episode season on this?
Ryan: Since we premier in the fall, the possibility’s certainly there, but in success if viewers come to the show we could get a back nine from NBC. We hope that happens.

Eric, I want to jump to you for a second. You, of course, have a lot of history in dealing with fantastical dramas, between SUPERNATURAL and REVOLUTION. What has TIMELESS been like for you?
Eric Kripke: TIMELESS has been really fun and challenging. I think the part that’s been fun is it’s really allowed us to explore history. A lot of times, I’ll get excited by a show if I know the research is going to be interesting. On this show, we have a historian who lives with us in the writers room. Everyday breaking story is a fascinating day. We learn so much about these really unknown and amazing details in history. It’s been really fun to write. A lot of times, when we do a network show so much of it’s about designing a really good clean engine for story. Doing 22 of these a year is no joke, you need something to be able to generate all that story. The idea of being in a new historical period every single week with some fascinating historical story within it has proven really fruitful. The part that’s challenging is this is a really damn hard show to produce. It’s a show with almost no standing sets, and every week there’s an entirely different historical period. Those need to be completely built to our standards and have it look very real and detailed. We shoot it for a couple days and then we tear it down. A perfect example of this is as we speak there are dozens crew up in Vancouver building the Alamo in a parking lot.

In the pilot you deal with the Hindenburg. It seems like you’re going to be dealing with a lot of the bigger, more known historical events in American history. Do you have some in your back pocket that are perhaps little known that you will have the chance to expose people to for the first time?
Ryan: I think we’ll have a variety of things, and I would say it’s not just American history. Episode four takes us to Germany during World War II, and we meet Ian Fleming who was, in fact, a British spy behind enemy lines before creating the James Bond novels. Episode three is one that explores a really fascinating character in history, Judith Campbell, who is mistress to JFK, mistress to the mobster Sam Giancana, mistress to Frank Sinatra. She was the woman who passed messages, was a courier for messages between the JFK administration and Sam Giancana and the mob. She was a name not many people today know about, but she was a crucial, sort of fascinating person in history. We have an episode kind of built around her. We are going to hit a lot of iconic stuff. Episode two deals with the night of Abraham Lincoln’s assassination. We have an episode coming up that deals with the space race and the day we landed on the moon. We’re also going to investigate those areas of history that people might not know as well as ones we find particularly fascinating and characters of history that might not be as well known.

You said episode two is going to deal with the assassination of Lincoln. I’m curious, is there ever a moment where the characters will go, “should we let him do this?” Are they trying to preserve Lincoln getting assassinated? Are we going to see moments of, “maybe we shouldn’t let Lincoln get assassinated?”
Kripke: That’s completely the idea. One of the interesting facets of this show is the continual moral dilemma our characters are placed in. Their job is to preserve history. Sometimes that means letting bad things happen. For instance, there’s some very real debate in the Lincoln assassination episode about whether they should allow Lincoln to be killed. On one hand it’s a disaster for the country, it’s a disaster for African-Americans. On the other hand, if we were to save him we might return to a present that is completely unrecognizable, maybe it would be better, but maybe it would be worse. Those debates happen in our show because they’re very interesting what ifs. What it really comes down to is it’s a conversation of fate versus free will. Is there a plan that is supposed to be carried out, or is it all just random chaos and we can make whatever decisions we want to make?

Are fate and time conscious things on the show? A thing that’s often explored in time travel media is the idea that time doesn’t like to be screwed with. Is that something you’ll explore?
Ryan: We don’t do it in a way that. I’m familiar with some other stuff and history tends to push back. We’re not really exploring it as much as probably other shows because, for us, it comes down to the choices of the characters. Do you let something happen because that’s the way it’s supposed to happen or do you make a direct choice to intervene, potentially knowing what the consequences are going to be?
Kripke: Or not knowing what the consequences are going to be.
Ryan: Exactly. I would also argue we use time travel and we have time travel machines, but ultimately we consider ourselves to be a historical action adventure romantic show more than we view ourselves as a genre sci-fi show. The time machines in our show are designed to easily transport us to these different iconic moments in time that our characters can engage in. The vast majority of the show is about how we relate and act in these different time periods more than it is diving into sci-fi deep questions. We have a couple of those things that we have and we’ll exploit them when we think it’s worthwhile, but the time machines are a tool for us to tell these fun historical dramas.

Given how much time travel there is on TV right now, let alone the five different shows, including yours, launching this season. Do you feel there’s way more competition than you anticipated when you first embarked on making this show happen?
Kripke: No. The majority of the new time travel shows not premiering in the fall. We’re premiering in the fall and most of them are going to be mid-season. We’re lucky in that the scheduling gods conspired to give us a clear playing field on which to land. I feel all of us in the business talk about the amount of time travel shows, but I’m from Ohio and I can tell you, at least anecdotally, none of my friends or family in Ohio have any sense there’s a lot of time travel shows on TV. They’re just looking to find something which is kind of entertaining and accessible and exciting. We think we can offer that. It reminds me a little bit of when in 2005, when SUPERNATURAL premiered, there was a glut of genre shows about monsters and I would get this question a lot then too. My answer was always the same which is, we’re going to focus on making the best possible show we can and let the chips fall where they may.
Ryan: I want to also add to that, referencing my earlier comment that we view this more as a historical action adventure show than a time travel show, the shows you’re referencing I don’t think will be confused with ours at all. They might end up being confused for each other, but they’re very different from what we’re doing. We’re going to rise or fall prior to the release of any of those other shows. People will embrace us or not before then. Ultimately, no one seems to worry too much about how many cop shows are on the air, or how many medical shows are on the air, how many soap operas are on the air. I’m not sure why there’s a different standard in terms of time travel.
Really, it comes down to execution and ultimately do people want to spend each week with the characters in your show. I would argue we, in many ways through sheer luck, have a cast that, as episodes keep coming in, are extraordinarily appealing and we believe that people are going to want to spend time each week with them. Our actors are pretty amazing and we’re fortunate to write for them each week.