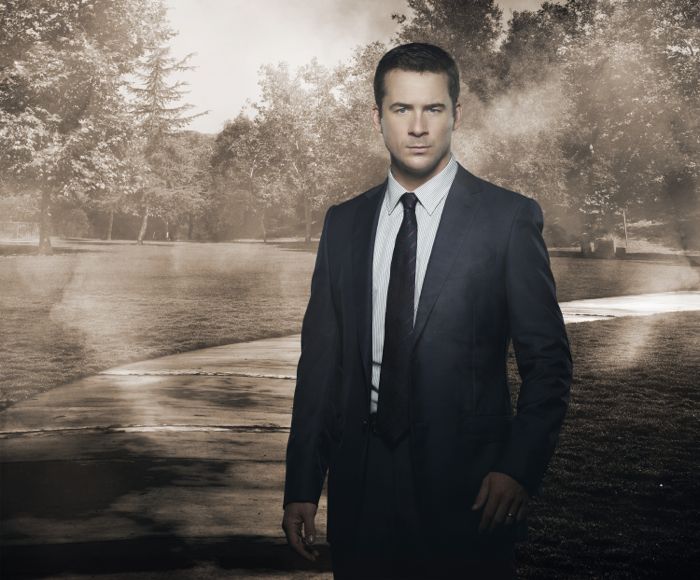 Mysterious and spooky things start happening in ABC’s new drama series THE WHISPERS.  There is the creepy “invisible friend” known as Drill, that befriends young children and convinces them to do questionable acts.  There is an object found in the desert that seems other-worldly, but is it. Then there is the guy who one day appears and he does not seem to have memory of his prior life — but is that amnesia hiding an even darker secret?  Then there is the government agent assigned to figure out just what is going on.  As Defense Department Operative Wes Lawrence (Barry Sloane) quickly finds out, there is a lot more going on than just a government cover-up.  All these stories are interconnected and once Wes starts to see the pattern, things will go from spooky to downright terrifying.  It also leads him to cross paths with a woman he had a brief affair with, FBI child specialist Claire Bennigan (Lily Rabe), who is investigating who just might be influencing children to do a string of violent crimes.

In an exclusive interview, star Barry Sloane talks about the many mysteries that unfold and the part that his character Wes has to play in figuring it all out before it is too late.

Who is Wes Lawrence? How would you describe him?
BARRY:  Wes Lawrence is a father, husband and very driven member of the Department of Defense, who has moved up very quickly due to his drive and ambition and has kind of put his job above his family, up until this point in his life.  I think you are going to kind of see that unravel in him during the course of the series.  He has managed to hold that weight of those choices up until this point.  But as with anything in life, he has come to a crossroads now where he is going to have to face up to some choices that he made.

What drew you to this character?  What do you like about him?
BARRY:  I like that fact that his is an accidental hero throughout this whole piece.  That was something I enjoyed playing.  I’ve played characters before who were very tough guys and they could win at anything.  So I didn’t think Wes was that at all.  I just felt that he was put in a situation about it was about how he was going to sink or swim.  So what I enjoyed about playing Wes throughout the series was like that child’s game Buckaroo! — like how much weight can you put on this guy’s shoulders before he buckles? And when he does buckle, can he get up? That was something that I liked: even though he was downtrodden, he could keep moving forward. That was something enjoyed playing.

Wes gets embroiled in the mystery right away.  He gets called out to the desert to see this mysterious artifact.  What is his job in regards to that?
BARRY:  He has been put in charge of something called the Special Projects Division, so anything that is outside the normal parameters of law enforcement.  But this is the first time that he sees something that actually terrifies him.  It doesn’t terrify him in the sense that it is other-worldly.  It is something that we could quite feasibly see here, but there is something not quite right about it — and it terrifies him and excites him in equal measure.  That’s the look I kind of went for when I was looking at the thing.  It’s kind of a life-affirming moment in a lot of ways.

We know as viewers right away that there’s something going on with these “invisible friends” of the children, but Wes seems to be off and investigating this artifact. So when does he tie into the “invisible people” kind of world?
BARRY:  As we leave the pilot episode, Wes is out there in Mali and is instructed to head back right away by the Secretary of Defense — and you do as you’re told.  So I think he feels a little bit confused as to the timing, just as he comes across something interesting, he’s not being allowed to study it.  So that piques his curiosity.  But the fact that is related to what is going on in Claire’s (Lily Rabe) life is not yet revealed as related.  In the next episode, it kind of comes together as Wes and Claire are forced to make contact.  But at the time, he does not yet know.

How do the children factor into the story?
BARRY:  Obviously, they are the ones making contact with whatever this thing is.  To me, it is a loss of innocence story as well.  I think that terrifies people on many levels.  I think we are all ultimately envious of the innocence of a child and we are also very defensive when we think their innocence can be taken away.  That is something that is going to pull on people more in the great scheme of the story.  But I think what is going to draw people to this story is the fact that we are trying to protect our children.  It is something we can all relate to.

I never had a sense that the children were in danger.  Should we be worried about the children?
BARRY:  When Wes is confronted with the fact his daughter has an imaginary friend, I think the first thing Lena (Kristen Connolly) and Wes do is think is, “We haven’t kept our house in order.  Therefore, it’s probably our fault she’s using this imaginary friend for problems we put on her.”  So I think the initial reaction of parents is to kind of blame themselves for not doing the right thing and obviously missing key signals straight away.  If your kid tells you that they’ve got an imaginary friend, you are not necessarily going to think it is something that could be dangerous.  That’s where we’ll start the story and we’ll see where it goes from there.

How dangerous is Drill?  We don’t see him, but we see his presence all around.
BARRY:  In the first episode, it shows someone being influenced by him who made a suicide bomb who is a child.  So if he was influenced by this entity, the same as Harper (Abby Ryder Fortson) was when she is convinced to tamper with the treehouse and makes her mother fall.  It’s a very bad situation.  You have to imagine that he/she/it is not the nicest of things — or at least, it has some kind of agenda.  So I would say it is not the best person to play with your kids.

The third storyline involves Milo Ventimiglia’s character, John Doe.  How quickly do we get to see Wes and the John Doe character interact?
BARRY:  What I like about the pilot episode, and this was something I really liked when we started, was the writer was very confident in keeping these three characters [Wes, Claire, John Doe] on separate islands.  We didn’t interact for the entire pilot and we don’t really interact with each other too soon.  When everything does come together, it’s quite interesting.  Everyone’s going to enjoy Milo’s work on the show. It’s terrific, as is everyone.  There’s great performances in there.  You’re going to be intrigued by the mystery involved with these characters.

How would you describe the working relationship between Wes and Claire? They seem to have a lot of backstory.
BARRY:  Absolutely. That was another thing I enjoyed with the writing: we were coming into the story post-affair.  We’re actually watching the fall-out and damage caused by these extramarital affairs.  We are not seeing the sex and passion and the attractiveness of these affairs glorified on television.  What we’re actually watching on our show is how you put the pieces back together — how a wife forgives a husband, how a husband forgives a wife, how family units are affected by it, and how you get your house back in order.  Also, there is clearly still something between these two people and they are not apologetic. They are not saying they did something wrong.  They are saying, “This happened.”  I think when you see these two characters together, you see that clearly there is something that connects them.  Clearly, they riff off each other and that they have found an equal. But there is a deep sadness between these two characters, which I really loved when I watched the series.  That is something that draws them to each other.  At the beginning of the second episode, you’ll see a scene where they connect.  There are definitely sparks when we first worked together and I think that continues throughout, which I think people will enjoy watching.

To see if whether Wes and Claire can move past their complex past and solve the riddle of Drill and the artifact in time, be sure to tune in for the premiere of THE WHISPERS on Monday, June 1st at 10:00 p.m. on ABC.  And this might be a good time to start getting to know any “invisible friends” in your children’s lives.  More information about THE WHISPERS may be found on the official ABC show page http://abc.go.com/shows/the-whispers