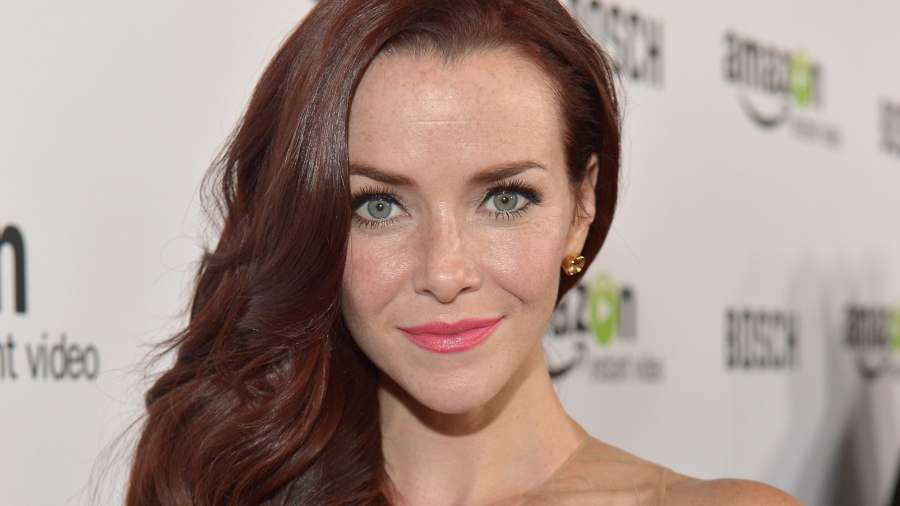 During the past six seasons of THE VAMPIRE DIARIES very little was ever known about the mother of Damon (Ian Somerhalder) and Stefan Salvatore (Paul Welsey).  It was said that she had died of consumption back in 1858.  What Damon just found out was his mother Lily Salvatore (Annie Wersching) had faked her death after becoming a vampire; and worse yet, she was a ripper.  A ripper is a vampire who is so consumed by their blood-lust that they will literally rip the heads off their prey and do not care how many people they kill in their attempt to assuage their craving for fresh, human blood.

After years of terrorizing habitants of Europe and the U.S., the Gemini Coven finally succeeded in capturing Lily and stowing her away in a special prison world in 1903, where she has been left alone ever since.  That is until Bonnie (Kat Graham) stumbled across Lily when Bonnie’s prison world began to collapse.  After seeing his mother is alive and well, albeit trapped in another dimension, Damon is bound and determined to get his mother out of the prison world — even if it means teaming up with his former enemy Kai (Chris Wood) to do it.

In an exclusive interview, special guest-star Annie Wersching talked about her role as Lily Salvatore and teased what lies ahead once Lily is rescued.

What initially drew you to the role of Lily Salvatore?

ANNIE:  I got a description from the producers about the role of Lily and I was just super intrigued by all the different facets.  I think she is really multilayered.  There’s a lot going on with Lily.  So I was pretty excited to play someone that is intense and fierce as a ripper vampire, yet at the same time, is sort of a prim and proper woman of the past.  I just feel that there is a real interesting dichotomy with this role.  Once I read the full description and their plans for her, I was like, “Sign me up!”

It seems like you are drawn to role where you get to take a walk on the dark side.  Is that something you look for?

ANNIE:  [Laughs] No, not necessarily.  It’s always fun to play someone who has a lot of stuff going on.  You may think someone is a certain way and to see them crossover a different way or fall off the beaten path, that can obviously make things a bit more exciting opposed to just where you think your character is going.  But it is not necessarily something I look for.  I look for interesting roles where there is interesting stuff going on underneath.

If you could pick out one quality, what quality do you most admire about Lily?

ANNIE:  I’d probably say: loyalty.  She is fiercely, fiercely loyal to those that she deems worthy.

What draws her back to Mystic Falls?

ANNIE:  Pretty quickly you learn that Damon has this plan that maybe if he brings Mama back to Mystic Falls, she might be able to help with Stefan’s humanity issue. That is what initially brings her back to present day Mystic Falls. But, of course, as the show goes on, nothing goes exactly as planned.  A lot of stuff happens to her besides trying to help with Stefan.

How does Lily feel about her sons, Damon and Stefan?

ANNIE:  That’s a huge part of her — the relationship between her and these boys — they have in their head this sort of vision and that’s been crushed, their idea of what happened to her.  They hold a lot of anger and resentment about what they think has been lies and, of course, there are two sides to every story.  So she wants very much so to try to be the mother that they long for and they are hoping for to be returned to them.  But she has lived through a lot of awful stuff since she “died.”  She is not quite able to give them exactly what they are looking for, but she is trying.

Is Lily proud of the fact that both her sons are vampires and that one of them is a ripper like her?

ANNIE:  I guess so.  Obviously, there are some similarities between her and both of them in different ways.  She’s happy they have turned into seemingly good men.

But she clearly doesn’t want Stefan to be a ripper if she is going to help him.

ANNIE:  Right.  She is this prim and proper woman of the past and I don’t think ripper-ism is anything she wanted herself and is certainly isn’t something she wanted for her son.  That being said, she also understands what it is like, and when you are in the middle of it, you don’t have much control over it.  So she has a little bit of empathy towards what that is like.

Since Lily is known to be a ripper, are we going to have to worry that she has a strong blood-lust and that she may try to try kill everyone in sight?

ANNIE:  [Laughs] In this episode, as they are getting ready to leave the prison world, she actually reveals something to Damon and Elena [Nina Dobrev], a surprise — a secret she has in her prison world — that is shocking to them.  That then becomes an issue for her and something that she to — well, when she doesn’t get what she wants, it is hard for her to keep that blood-lust of ripper-ism at bay.  It is very hard and we will have to see how she does.

If you were to offer some advice to Lily, what would you tell her?

ANNIE:  I would probably tell her that although it is hard to realize it and feel it right now that her sons do in fact care for her and have her and their best interests at heart.  That she should try to trust them.

How is Lily going to feel about Caroline (Candice Accola)?

ANNIE:  There’s a lot of different facets on the different sides of Lily and different things that she has to deal with and learn about.  I wouldn’t say that Caroline is one of her top priorities once she gets back.  There is some other stuff going on for her that she needs to have people help her with — and, obviously, the relationships with her sons are the first thing that they are trying to fix and figure out exactly what their dynamic is.

Is Lily going to have an opinion about Elena?  After all, Elena has dated both her sons.  Is she going to take to Elena?

ANNIE:  [Laughs] In the prison world, when she seems Damon again for the first time, she meets Elena as well.  So right off the bat, she knows Elena.  But there are so many other issues going on, I wouldn’t say that she jumps right away into an “approving mother” role towards her son’s girlfriend Elena or Caroline.  Lily has a lot of other stuff to figure out before she can be shopping with her potential daughter-in-laws or whatever.

So she’s not planning any weddings any time soon then.

For you, what has been the funnest part working on the show?

ANNIE:  Oh my gosh!  There has been so much fun stuff.  I’m a little bit of a goofball.  I take all sorts of silly behind the scenes pictures.  Either time I get to see a cool vampire thing or do a cool vampire thing, I’m always like, “This is so fun!”  Now that the audience has learned some stuff, I finally get to post some of my pictures.  I can post like when they did the mold of my teeth to make the vampire teeth. I was just so excited.  So that part has been really fun.  And it’s also just fun to come onto a show that is 6 years in and they are going strong. They are such a family. Obviously, since they are all living in Atlanta together, that helps with that.  Ian and Paul are just the kindest, sweetest, most generous, human people. So that’s nice. You don’t always get that when you come into a show.  So it’s been fun to join something that feels sort of warm-and-fuzzy.

Will we see Lily interact with Michael Malarky’s character Enzo?

ANNIE:  It’s kind of funny to me to see Lily interact with anybody in Mystic Falls.  She’s definitely gotten to meet a few people.  But she is learning a lot about the world and how the world works now.  It’s been fun for her to interact with any of the people who are not people from the past.

She sounds like a kid in a candy store!

To find out just what Lily may be up to and if she will have a chance to give her blessing to either Elena or Caroline dating her sons, be sure to tune in for all new episodes of THE VAMPIRE DIARIES starting Thursday, March 19th at 8:00 p.m. on the CW.  Lily will also return for the upcoming episode “I Could Never Love Like That” on Thursday, April 16th and a few more as the season races towards its finale on May 14th. (Annie Wersching may also be seen in Amazon.com’s new detective drama BOSCH, which was just renewed for Season 2.)