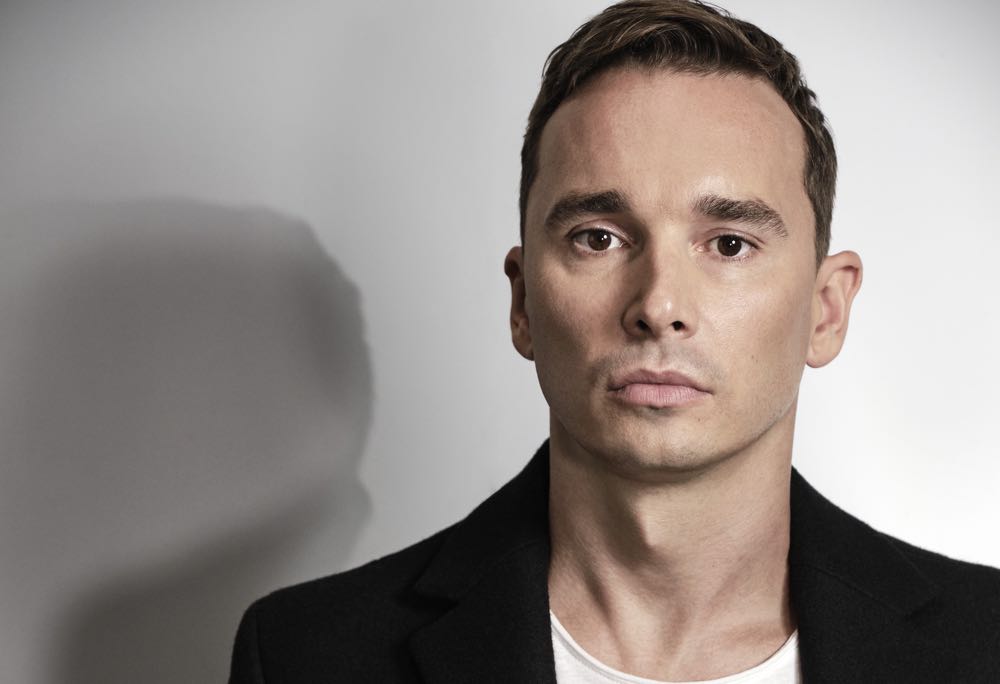 Bringing joyous levity to the role of the autonomous AI character of Isaac in the Fox dreamed series THE ORVILLE, Mark Jackson is delightful to watch on screen. It never fails to surprise how a character that entirely conceals the actor can still convey and invoke strong emotional reactions, particularly as some of most tender and human scenes on THE ORVILLLE have been portrayed by Isaac as he interacts with his fellow USS Orville shipmates. It is a credit to Mark as he makes Isaac seem more human and life-like in his uncanny and nuanced portrayal. In an exclusive interview, Mark talks about the appeal of working on THE ORVILLE.

What was the initial appeal for you about portraying Isaac and working on THE ORVILLE?
MARK: Other than working with Seth MacFarlane in the LA sunshine? To be honest, it was the winning package of going on an adventure 5000 miles from home to work with great people on a whole new sci-fi saga.

How would you describe who Isaac is in the series?
MARK: He’s an artificial life form from the planet Kaylon and Science Officer on the Union ship The USS Orville.

What do you most admire about Isaac?
MARK: His tenacity and his curiosity. Also his buns of steel. That costume is very flattering.

In the most recent episode, we saw Isaac and Alara engaged in arm wrestling. What was it like filming that scene with Halston Sage?
MARK: Halston and I always enjoy spending time together. Embarrassingly, she may have actually been the stronger of the two of us.

What will you miss about Halston working on the show?
MARK: We share a love of cooking and talking about it. I’ll miss my stew buddy.

What has surprised you about the show so far?
MARK: How the tone of the show can turn on a sixpence. One moment your laughing at a fart joke and the next your crying at something unbelievably moving.

What has been the best part about the experience of working on THE ORVILLE?
MARK: The on-set family we have — and it’s 90 strong.

What do you think viewers will appreciate about the show?
MARK: It feels more comfortable in its own skin and, because of that, really lets its hair down.

At this stage of your career, what do you think you have learned from the roles and projects you have worked on?
MARK: Always be open to learn something new because there is really no way that you’ll know it all.

What has surprised you most about your career so far?
MARK: The sheer variety of characters I’ve played. I’m not sure you’d call me a character actor exactly, but it’s heading in that direction. I thought it would be all Shakespeare and posh British boys. I’m very pleased it’s not.

Then what are the perks of where you are in your career right now?
MARK: I think being part of a show that people genuinely love is a wonderful thing. I get to be part of that discourse between fans and show.

What has been your proudest achievement as a working actor at this point in your career?
MARK: I hate to sound predictable, but I’m very proud of creating Isaac. It’s not often that actors get to originate a part. I’d like to be instrumental in his journey forward too.

Has there been any great advice you have gotten about working as an actor?
MARK: Don’t be afraid to be ugly. I don’t blame actors for getting tied up about their appearance because we’re all constantly being stared at, but it’s liberating to let go of it. I must always remind myself of it.

What advice would you offer to other upcoming and aspiring actors?
MARK: Make your own projects with your friends. It’s taken me 13 years to get round to doing it properly and it’s empowering. Wish I’d done it sooner.

Do you have any other upcoming projects that you can share that fans should keep an eye out for?
MARK: I’m somewhat gagged about one of them, but the other is a wonderful short about a UK military drone pilot I’ll be shooting this spring with Seek Films so watch out for that on the festival circuit.

All new episodes of THE ORVILLE air Thursday nights at 9:00 p.m. on Fox. To keep up with the show on Twitter, be sure to follow @TheOrville and to see what’s going on as Mark’s career grows, you can follow him on Twitter @MarkJacksonActs.

THE ORVILLE – Isaac One Humanity: