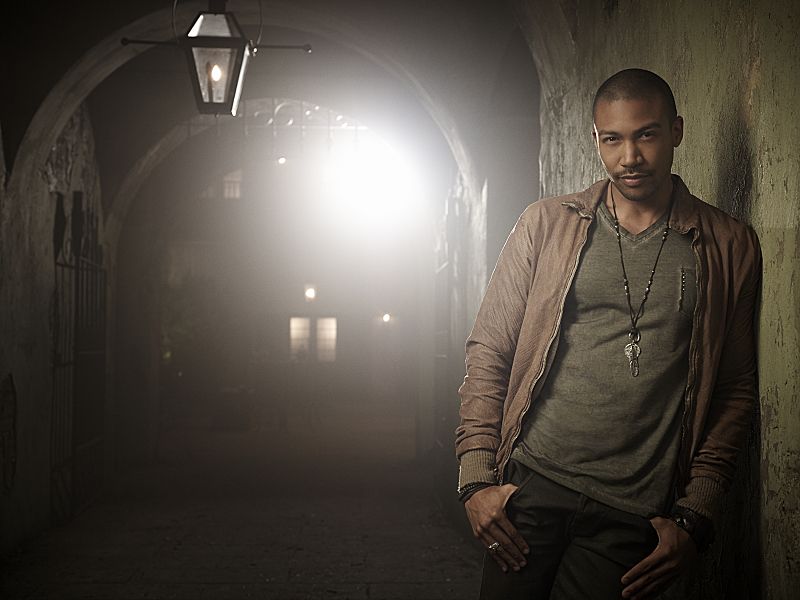 It is good to be king, and returning to claim his lost throne as the Vampire King of New Orleans is Marcel (Charles Michael Davis).  With Klaus (Joseph Morgan) preoccupied with Baby Hope and the fact that Hope’s birth mother Hayley (Phoebe Tonkin) is unavailable due to the terrible fact she is stuck in wolf-form, it has opened up a window of opportunity for Marcel to focus on rebuilding his lost vampire empire.  However, there is one small hurdle that Marcel must confront right away:  the fact that so many vampires have been killed off under the reign of terror by Dahlia (Claudia Black).  So Marcel’s foremost thought is recruiting some new blood and he has found the perfect way to do it:  cage fights.  It will weed out the weak and test the mental stamina of those who just might make fine additions to the new world that is rising up in New Orleans.  For a king cannot rule without soldiers to lead and those willing to follow him into battle.

But who is there left to fight with Dahlia having left a trail lined in blood of witches, werewolves and vampires last season?  Fortunately, not every supernatural being was killed or vanquished.  Davina (Danielle Campbell) has gathered and solidified her reign over the New Orleans’ witches and Jackson (Nathan Parsons) still leads the remain Crescent Moon werewolves.  That just leaves the vampires, meager as their ranks are, and Marcel is determined to bring the vampires back into their glory as the rightful rulers of New Orleans.

In an exclusive interview, star Charles Michael Davis talks about Marcel’s move to reclaim the throne and his efforts to restock the vampire talent pool:

Best of all, Charles also teases just who might be the lucky lady who might one day be the Queen to his Vampire King in New Orleans.

Lest anyone forget, Klaus and his Originals siblings Elijah (Daniel Gillies) and Freya (Riley Voelkel) are still very much present in New Orleans.  They will just soon have a lot more on their mind and keeping them distracted with the arrival of the First Generation and a brewing Sire War.  For did Klaus Mikaelson truly believe he could father an entire generation of first vampires and it would not come back to haunt him one day?  Knowing Klaus, he probably did.  But in Season 3, the children have come home and they have a bone to pick with not only daddy-dearest – that includes with one they see is a rival as they seek to claim their rightful place in the ranking Vampire Court of New Orleans as well.

As for the lovely Rebekah (Claire Holt/Maisie Richardson-Sellers), Charles assures that she may be temporarily M.I.A., but she will indeed return this season on THE ORIGINALS.  Rebekah has that incredible knack of knowing just when she is needed and that is undoubtedly the moment she will reappear.  Plus, what kind of family reunion would it be without one of the Original siblings to greet and keep in check those rescaling and unruly First Generation vampires.

Only one thing is certain:  it is only good to be kind if there is no one else who can challenge you.  Marcel is going to have his hands full with and we will be rooting for him to not only keep his crown, but his head as well.  The only thing we might forgive is if his heart is stolen.  We’d love to meet the lady capable of that!

To find out just how dire and deadly the threat is from the returning First Generation and how bloody the Sire War will become, be sure to tune in for the Season 3 premiere of THE ORIGINALS on Thursday, October 8th at 9:00 p.m. on the CW.  Also find out who is deemed worthy to be chosen into the Vampire Court.