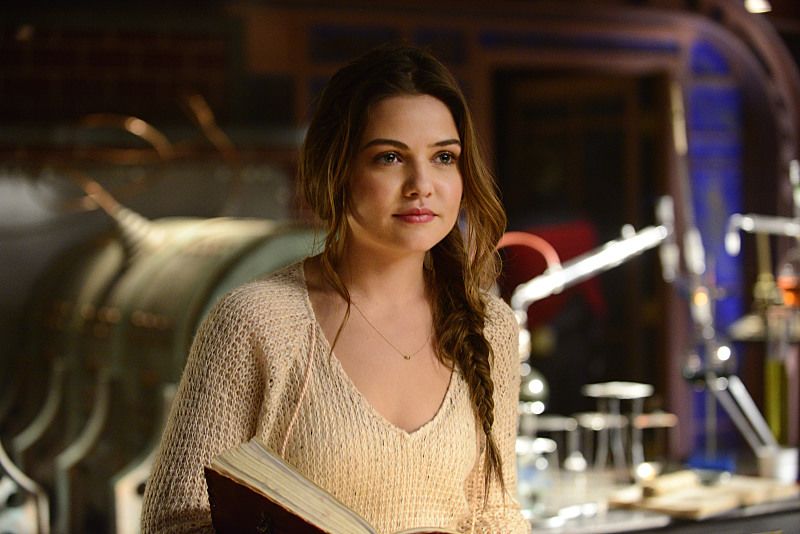 Davina Claire (Danielle Campbell) should know by now that getting involved with the Mikaelsons is never a good idea — let alone falling in love with one — but she fell fell madly in love with Kol (Daniel Sharman) anyways.  That is love’s curse: you don’t get to choose who you fall in love with, and it was a tragic star-crossed love story from the first moment Davina met Kol.  When Kol finally died as a result of his brother Finn’s evil witchy scheme, Davina vowed that she would find a way to bring him back and has determinedly worked day and night since then.  But the question remains: Kol was resurrected into Kaleb’s body when she met him before, if he returns again, will Kol look the same or will he come back to inhabit someone new, yet again?

In an exclusive interview, star Danielle Campbell talked about where Davina’s head and heart lie and challenges ahead for her as the Mikaelson’s battle with Dahlia for the fate of Baby Hope.

It looks like things may be shifting a little bit as we last saw Klaus (Joseph Morgan) in a very precarious position in this last episode [“When the Levee Breaks”].  Does Davina want to weigh in one way or another or is she just happy about it?
DANIELLE:  I think Davina is more focused on her own issues.  I feel like Davinåa is never really concerned about Klaus ’til it interferes with her plans and what she is doing.  So I think right at the moment she is getting ready to hate him again.

Is Davina going to be the shoulder to cry upon for Josh (Steven Krueger) and Klaus taking the blame for Aiden’s (Colin Woodell) death?
DANIELLE:  Yeah, she definitely hates Klaus right now because of what he has done or thinks he has done.

How does Davina feel about Freya (Riley Voelkel)?  Freya is the wild card right now.
DANIELLE:  It’s true.  Freya is the wild card.  She knows Freya is in town and that she might be related to the rest of the Originals. But I think the more immediate thing for Freya at the moment is what’s between her and Klaus.  So you’ll see more of that coming up for sure.

Marcel (Charles Michael Davis) also seems to be on the outside at the moment and it looks like he might be having some problems soon. Will Davina be coming to his rescue?
DANIELLE:  Something does come up in the next couple of episodes and you might see more scenes with Davina and Marcel.

That would be great.  It’s actually kind of fun when you and Charles interact.  You two must have a lot of fun working together.
DANIELLE:  Oh my god, we have so much fun!  Charles is so much fun to work with.  I adore him.

It’s that smile.  You cannot help but grin right back at him!
DANIELLE:  [Laughs] Right?! Exactly!

We know that Davina is a bit preoccupied in getting Kol back.  Is she going full-steam ahead with that?
DANIELLE:  That is anything and everything she is focused on right now.  She will do anything that is possible in her power to bring him back.  She is very determined to bring him back.

Is she hopeful to bring Kol back in Kaleb’s body, or if he comes back as somebody else, will she be okay with that?
DANIELLE:  That’s the real question.  I think she has really fallen for Kol.  No matter what body he is in, she just wants him back in her life.

What would you miss the most about working with Daniel Sharman, if Kol were to come back as somebody else?
DANIELLE:  Oh my gosh, he has just the most sarcastic, witty, fun humor.  We would banter all the time.  He’s so funny! If Kol does come back, I hope it’s someone who is very, very funny.

With Haley and the Crescent wolves kind of wanting to go their own way versus what is going on with Klaus and the Mikaelsons, does Davina care? Does she care where Baby Hope goes?
DANIELLE:  She definitely has a soft spot for her.  Knowing that everyone is after the baby — and Davina was hurt by her own people — she definitely has a soft spot and does not want anything to happen to another child.  I think Davina is a very strong girl and would do anything to help Hope.

Does Davina think she needs to worry about Dahlia (Claudia Black), or is she ready to face Dahlia if that becomes necessary?
DANIELLE:  I think if anything were to threaten Davina or her friends, she will do anything to stop whoever that is.  Right now, I don’t think she believes Dahlia is an immediate threat to anyone but Klaus.  But if she threatened anyone else, Davina would definitely take charge.

So we could possibly be seeing a Davina and Dahlia showdown at some point then.
DANIELLE:  Oh that would be fun, wouldn’t it?! [Claudia’s] great too.

What is going on with Davina and Cami (Leah Pipes)?  Sometimes it seems like they are friends and other times it seems like they just ignore each other.
DANIELLE:  They are definitely friends.  Davina, just when she is focused on something like bringing Kol back, she just doesn’t leave that spot.  We will see her just over and over trying to bring him back.  She has basically secluded herself and everyone will have to come see her if they want to talk to her.  She is not paying attention to anything.  She’s just very focused and determined.  And Cami just gets caught up on all the Mikaelsons’ drama.  So Cami is busy too.  But you see some girl-action for sure in tonight’s episode.  You get to see them be friends tonight.

Is Davina Team Cami/Klaus getting together or would that be Davina’s worst nightmare?
DANIELLE:  [Laughs]  That would probably be her worst nightmare.

She might not be bad with that one actually since she loves Marcel and she loves Cami.  So that would work out pretty well for her if that were to happen.

To find out whether Kol will be resurrected and as who, be sure to tune in for all new episodes of THE ORIGINALS Monday nights at 8:00 p.m. on the CW.  After tonight, there are only two more episodes left for this season, which the Season 2 finale airing Monday, May 11th.

ARROW Spoilers: Taking Aim at ‘Al Sah-him’ and ‘This Is Your Sword’