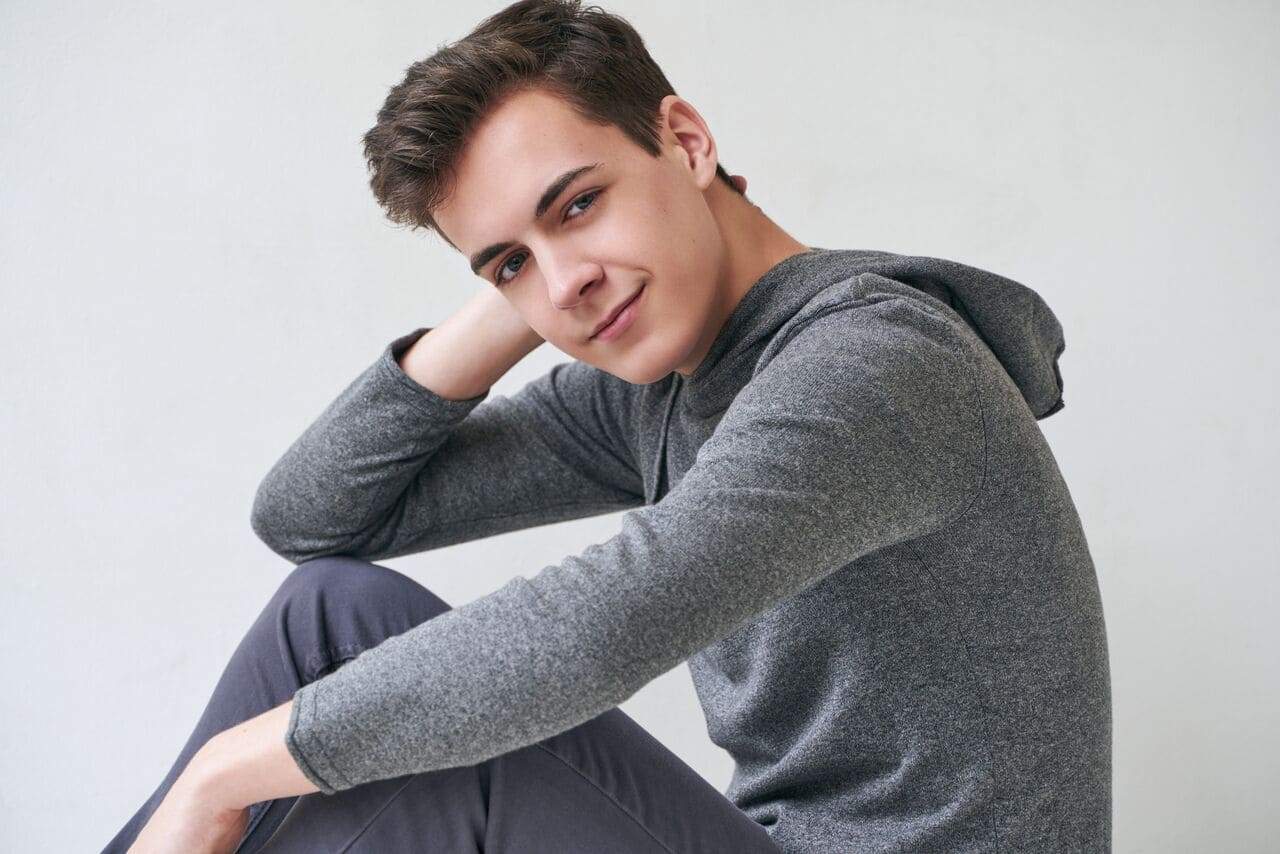 In the Amazon series THE MAN IN THE HIGH CASTLE, where perfection is the goal and loyalty is rewarded with power, the Greater Nazi Reich confidently strides forward under the masterful helm of Fuher Adolf Hitler.  However, when devoted follower Obergruppenfuhrer John Smith (Rufus Swell) finds out his son has a crippling disease, it becomes imperative to protect his son and keep his son’s condition secret at all costs.  In an exclusive interview, star Quinn Lord talks about portraying John Smith’s son Thomas and the fun he had bringing this role to the screen.

What initially drew you to the role of Thomas Smith in the Amazon series THE MAN IN THE HIGH CASTLE ?
QUINN:  I really liked the idea of playing the ‘perfect son’ in a not so perfect world. Through Thomas, you can see the values in place, that he has been brought up with, and how different The Man in the high castle world really is.

How would you describe Thomas?  What do you most admire and/or like about him?
QUINN: I’d briefly describe Thomas as a boy scout in a surreal world, with straight A’s and a strong feeling of duty. Underneath, he has a very strong bond to his family and what he believes is right.

Is Thomas solidly behind his father John Smith and the Reich, or is he starting to question what is going on in Season 2?
QUINN: Thomas is strongly behind what he has been brought up with. Whether it’s his family and their decisions, or the Reich and what must be done. There may however be some overlap.

What journey does your character undertake in Season 2?
QUINN: Only time will tell…

What was your favorite part about working on this project?
QUINN: I had always wanted to watch an alternate history TV show, or Movie for as long as I can remember.  When I first heard about THE MAN IN THE HIGH CASTLE, I was thrilled. Not only is it the alternate history show that I was craving for so long, but I had a chance to be part of it!

What was the one thing you took away from working on THE MAN IN THE HIGH CASTLE?
QUINN: When I submerged myself into the character of Thomas and his world, it was so foreign and eerie, quite a scary place to be, but what’s even crazier is that you adapt to it, and the shock lessens after a while. This realization really got me thinking about our current world and how we really can make a difference by not letting ourselves adapt, or settle into ways we don’t believe in, and that the smallest change can have a “Butterfly Effect” on the bigger issues in our world.

At this stage of your career, what do you think you have learned from the amazing variety of roles and projects you have worked on?
QUINN: I feel I have learned how many characters come to be. In that, the history of the character, all the previous experiences, shape about 95% of the person. A pure hearted person can still be pure of heart in a twisted reality as long as they believe what they’re doing is right. Just blows my mind.

Then what are the perks of where you are in your career right now?
QUINN: Well, I’m turning 18 in February so bring on the love interests! 😉

If there were one role you would like to revisit, which would it be and why?
QUINN: There was a pilot series called “17th Precinct,” by Ron Moore. It was set in a parallel type universe where magic and science had swapped places, whereas magic was apart of everyday life, and science was almost mythical. I really think they should give this idea another shot, I think it may have been ahead of it’s time!

Has there been any great advice you have gotten?  What advice would you offer to other upcoming and aspiring actors?
QUINN: Keep yourself grounded, stay true to yourself and always be kind to everyone.

Are there other upcoming projects that you can share that fans should keep an eye out for?
QUINN: Currently I’m just enjoying the holidays with my family, I have my eye on a few projects though!

What do you aspire to do next?
QUINN: Right now I’m doing some writing, trying to finish my first script. It’s sci-fi of course! I’d love to work on something action-packed so I can try out my staff and sword skills, maybe fantasy or medieval, has to have a great story though. I really love playing deep characters that have to deal with a lot of inner turmoil and struggle.  Exploring my sarcastic, English roots with a dark comedy is also high on my list.

To find out what if John Smith and his son are able to keep their secret and the ramifications if it comes out, Season 2 of THE MAN IN THE HIGH CASTLE is currently available exclusively on Amazon Prime.