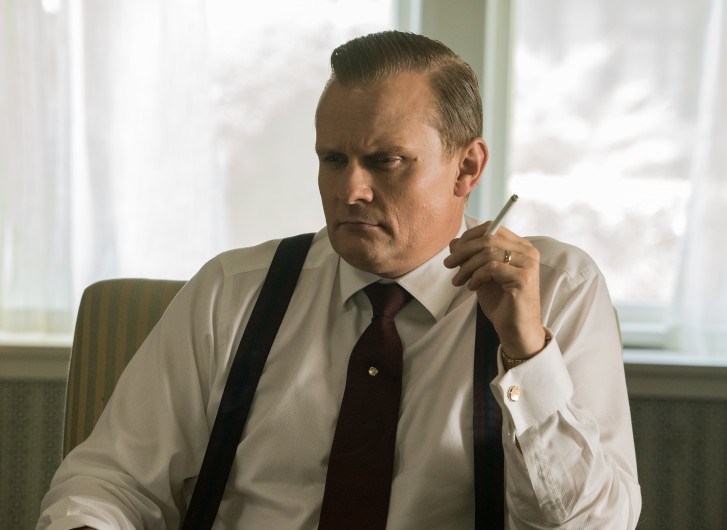 In the latest Amazon Prime digital television series THE MAN IN THE HIGH CASTLE, it takes viewers into a world where it imagines that the United States and its allies had lost World War II and picks up in 1962, nearly 17 years after when the war should have ended.  The show depicts a different world where the Japanese occupy the West Coast of North America and the Nazi’s occupy the East Coast and there is a vast neutral zone over the Rockies, where undesirables are shipped and attempt to live keeping their heads down.  As bleak as that all may sound, in the series THE MAN IN THE HIGH CASTLE, the story is carefully constructed around two key characters, a woman from the West Coast and young man from the East Coast who become embroiled in tale of espionage as both attempt to track down the “man in the high castle.”  With stunningly visuals and very compelling characters, the story quickly draws you in.

In an exclusive interview, star Carsten Norgaard revealed what part his character Rudolph Wegener has to play in the unfolding tale of two great empires nearly on the brink of another war and the murky alliances that are sought in the midst of uncertain times.

What drew you to THE MAN IN THE HIGH CASTLE?
CARSTEN:  I have always been fascinated by “what if” stories and I think this is one of the “what if” stories that is still on people’s minds for a long time.  I know that the project had been circling for a while.  I think Ridley Scott originally was looking to make it a feature film and then BBC was looking to do it.  But I think the fact that it is Philip K. Dick and he is such a prolific writer of the genre.  The story is about what if the allied forces had lost after the second World War and the Axis powers had marched through and conquered the United States.  It’s some pretty powerful visual imagery, as well as story writing.

Who exactly is your character Rudolph Wegener?
CARSTEN:  I basically play a double-agent, a little bit of an insider, posing as a Swedish businessman Victor Baynes who is in reality Rudolph Wegener and he is worried at the time that there is a power vacuum.  If Adolph Hitler dies, there will be a power vacuum and that could potentially cause war with the Japanese.  So he is traveling to the West Coast to meet with his Japanese counterpart in order to avoid a war by reaching a secret agreement.  So what kind of person is he?  He is a person who is deeply flawed.  He is a man who has done terrible things in his life and feels the guilt of his actions weighing heavily on him and he has made a mess of his family life.  So you could say Wegener is haunted by the atrocities he committed on behalf of the Reich, and his efforts to avoid war between the Japanese and the Nazi Empire is his attempt of atonement and redemption, so to speak.

What role does Tagomi (Cary-Hiroyuki Tagawa) play in Wegener’s path towards redemption?
CARSTEN:  Both share the same vision about not wanting to go to war, and Cary Tagawa who plays Tagomi — Wegner’s counterpart – he and I developed I would say a synergy between the characters and also as fellow human beings that have a lot of respect for each other.  I think that synergy ultimately ended up translating on screen.

So Wegener and Tagomi are working together to keep the peace?
CARSTEN:  That’s it. Yeah.

How does John Smith (Rufus Sewell) fit into this world?
CARSTEN: [Laughs] I don’t if I am at liberty to tell too much because that may send the wrong signals out.

Who are the power players that we should be watching out for?
CARSTEN:  Smith is definitely one of them.  Tagomi and Inspector Kido (Joel de la Fuente), certainly. There’s lots to come.  The story is based on a novel and has been serialized pretty masterfully by Frank Spotnitz taking it through the key threats to begin with through a slow reveal of the story showing the tapestry and at the same time honor the great literature that is THE MAN IN THE HIGH CASTLE.  The biggest difference between the two is that in the novel there is a book and now it is a newsreel.

It certainly asks us to imagine that these characters believe that there might be an alternate reality where things are different. Are we supposed to buy into the science fiction side of this story – that there could be an alternate reality – or are we supposed to just believe just in the reality that we are seeing as depicted?
CARSTEN:  Right now you are seeing only one.  But the whole story is leading towards the alternate reality.   But for now, they are in this reality and the newsreels obviously depict a different outcome of the war.  That’s as far as I can mention.

Having watched the first couple of episodes, it is extremely exciting.  In fact, the story gets to a point where things are definitely not what you thought they were.
CARSTEN: And you’ve seen nothing yet!  They well-crafted the first 2 episodes.  The way Amazon made it inclusive for audiences to vote on the pilot and then the first reviews came out likening it to being Netflix’s HOUSE OF CARDS – that was extremely flattering.

It does have that feel about it.  It is definitely politically-based and it has an enthralling aspect that you feel addicted to pretty quickly.
CARSTEN:  Hopefully, people take away from it that history kind of repeats itself — so something like this never happens again.

What did you take away from the experience?
CARSTEN:  I think the level of freedom that was extended the project by Amazon.  It impressed me.  You just felt the creative flow with every department. Both in front of the camera and behind the camera, they were custodians of their own domains.  That’s a testament to Philip K. Dick’s original material and the people who posted such great reviews on it and garnered so much support.  It struck a chord with people.  So there was an underlying excitement when we arrived and everybody brought their A-game to the table.

Did you have any particular types of scenes that were you favorite to work on?
CARSTEN:  I couldn’t go into that now.  But I thoroughly enjoyed working with Cary Tagawa.  It was a very unique synergy that we had, both among our characters and as actors.

Can you talk about anything else you might be working on?
CARSTEN:   I don’t have anything that I’ve signed onto.  I have a couple of projects that are lingering.  And, hopefully, we will see a second season of THE MAN IN THE HIGH CASTLE.

What was your general impression coming away from this experience?  Why do you think people are liking THE MAN IN THE HIGH CASTLE?
CARSTEN:  I think a lot of people like those “what if” stories and I think this is one of the most relevant “what if” stories.  I am sure it has crossed a lot of people’s minds – what the world would look like if the Axis Powers had won.  But I can say that in this project there was a level of collaboration and involvement that is rare, and hopefully it will ultimately show on the screen.

To find out just who are the spies, who are the good guys and who are the true villains and if it is even possible to reach the alternate reality that many fear, be sure to check out THE MAN IN THE HIGH CASTLE, which is scheduled to release exclusively on Friday, November 20, 2015 on Amazon Prime.  (Note:  All 10 episodes will be available for binge-watching, which is a good thing because you are going to get hooked and will not be able to wait to see more right away!)