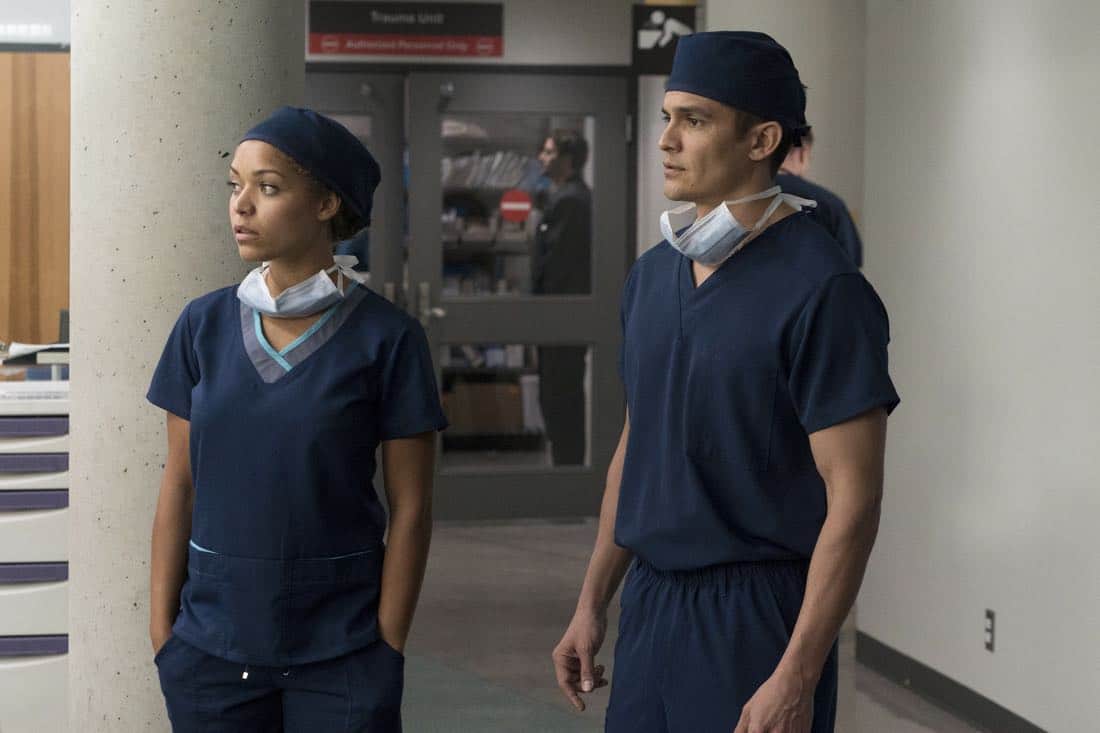 In the new ABC drama series THE GOOD DOCTOR, Freddie Highmore stars as Dr. Shaun Murphy, a gifted young surgeon, remarkably adept at using his knowledge and skills to save lives in spite of having autism. Brought to the television screen by executive producers David Shore and Daniel De Kim, THE GOOD DOCTOR is a surprisingly heartfelt and heart-warming look at a young doctor integrating into a new hospital and navigating through the social challenges he finds along the way. In an exclusive interview at this past summer’s Television Critics Association tour, co-stars Nicholas Gonzalez and Antonia Thomas talked about their characters perspectives and journey they undertake together to welcome and work with Shaun in Season 1 of THE GOOD DOCTOR.

Who do you portray in THE GOOD DOCTOR?
NICK: I play Dr. Neil Melendez. I am the attending surgeon who’s tasked with the job of teaching Freddie Highmore’s character, Shaun Murphy, as one of my character’s residents.

Is he really reporting to your character or will he be kind of working alongside of him?
NICK: Well, Shaun’s a resident, and my character is the attending. It’s a teaching hospital is my character’s job to teach him. So we work alongside together, for sure, but that’s my character’s job and he has an issue with Shaun being there because my character in his job is trying to minimize the unpredictables. It’s like bringing down the margin of error to the smallest percentage and Shaun represents the antithesis of that. And then Antonia portrays Dr. Claire Browne, who is one of his other residents as well.

Both your characters have very different view points on welcoming Shaun into the hospital, don’t they?
NICK: Yeah. I think audiences are really going to love Antonia, especially because she just has a patience that I think a lot of the other characters lack. It really takes the time to try to get to know Shaun and how he functions.
ANTONIA: I think my character just immediately realizes that Shaun is an asset, while other people test his skills. It’s a bit of a political mine-field and I think my character Claire is quicker to become an ally. She appreciates that Shaun was open to being friendly. She finds a narrow way of interaction, like finding a way to communicate with Shaun.
NICK: For Melendez, it’s not a lack of wanting to. It’s a matter of someone who wants a routine. Shaun teaches my character as much as my character is supposed to teach him, obviously.

I was enamored by the show the first time I watched it. It felt so hopeful and at a time when we don’t have as much hope in the world.
NICK: That’s exactly what it is. We were watching a teaser during the [TCA] panel and I teared up again. I can’t help but be moved by the swelling of the music and to react that way because I feel like we do need some optimism. This isn’t a blind optimism. This isn’t melodrama and sappy. But at its heart, there is hope, while instilling the realities of what’s going on. There is still this hope and every little thing we get, the hurdles that we get from Shaun as he becomes more and more a part of the team is that we can find a connection. Its like the sun coming out. I think audiences are gonna be really sucked in by his performance. I know I am, and I stand across from him every day.

What do you guys see in the pilot script that made you want to be part of this show?
NICK: I think the answer is the same for both of us.
ANTONIA: The the characters are just written — three-dimensional real people with real goals and real goals and real complexity, so that is exciting.
NICK: [Laughs] You ask everyone of us, the same answer: the writing. David Shore is a legend that doesn’t act like one. But he writes like one.

What will you characters’ interactions be like with Shaun?
NICK: I found that Melendez is trying to understand him because he’s on his team and once that happens, it’s not up for debate anymore. It’s a matter of what are his strengths and weaknesses, and how is Melendez gonna put Shaun into this team and minimize whatever risk he brings. The medical mystery will just follow. He is coming from a place of trying to understand rather than shutting down.
ANTONIA: Yeah, Claire finds a way to interact with him you and communicate with him in ways that he can understand.

Hill Harper’s character seems very determined to make sure that Shaun does not stay. So will your characters raise a united front to protect a member of your team?
NICK: Well, it also starts to morph into [Hill’s character] wants Shaun to stay because he wants Shaun to mess up. So he kind of in some ways becomes Shaun’s biggest enemy. It’s a complex relationship. That’s what I love about David [Shore]. One time I walked to him and said, “You know, I really love this scene. There’s no black-and-white relationships.” These are relationships that are very complex. There’s gray areas. There’s changing loyalties.

Is there going to be any romance on the show? I didn’t pick up on it in the pilot if there is.
NICK: Oh yeah.
ANTONIA: What can I say is we don’t know. We think they’re hiding it. So we don’t know who yet. [Laughs] So that’s something to look forward to.

To meet Dr. Claire Browne and Dr. Neil Melendez and see how their worlds expand upon meeting Dr. Shaun Murphy, be sure to tune in for the premiere of THE GOOD DOCTOR on Monday, September 25th at 10:00 p.m. on ABC.