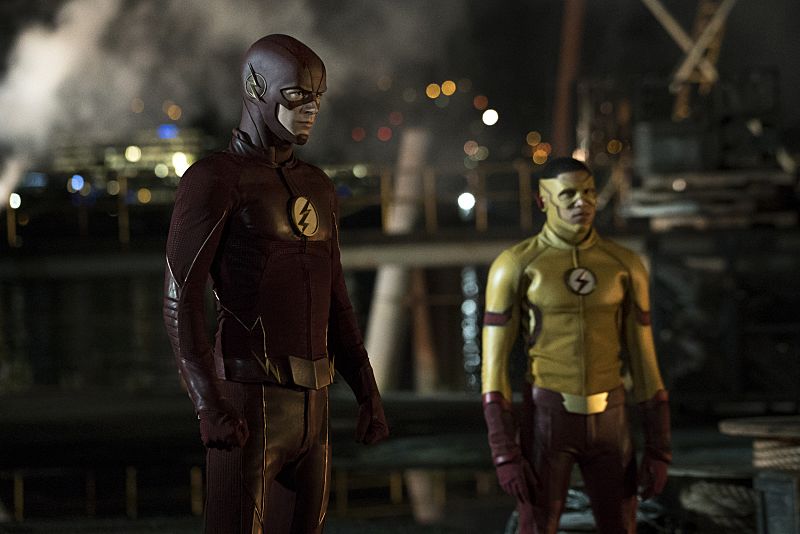 In the Season 2 finale of THE FLASH, Barry Allen (Grant Gustin) made a pivotal decision to race back in time to prevent the death of his mother believing that one thing would ensure his future life would be picture perfect: both his parents alive and together, Iris would no longer see him as a brother and open that door to romance, and Barry would be free from being The Flash — the one everyone looked to when the world needed saving from all the villains out there. But just what if all those “wishes” came true? Would Barry be as happy as he assumes? Seeking a few answers, I chatted briefly with executive producers Aaron Helbing and Todd Helbing while at this summer’s Television critics Association tour about where Season 3 of THE FLASH finds our heroes.

That was a crazy finale in Season 2 where Barry (Grant Gustin) goes back in time to save his mom and it sets everything. And now Eobard Thawne (Matt Letscher) as the Reverse Flash could potentially be back as well. What can you share about where the story picks up?
AARON: Well Barry’s been living in the Flashpoint-universe for a few months and living his life as it should have been. And he stopped Thawne from killing his mother, so Thawne’s a little pissed.

How much are we going to see of Thawne initially. Is he right there in our face or is he going to be teased out a little bit?
AARON: You see him right away.
TODD: You see him.

So there will be a lot of ripple effects from it.
TODD: Yes.

Is Barry feeling any regrets about his decision, or is he going to feel like defiant like this was something he was allowed to do?
AARON: I think like any decision you make of that magnitude, over time you start to realize the consequences of any action. And this is no different.

So it will weigh a little heavier.
AARON: He’s going to feel it.
TODD: Yeah.

Where else are we picking up our characters then? Where are we going to see Iris (Candice Patton) and her dad?
AARON: Joe (Jesse L. Martin) is still a detective in CPD.
TODD: Iris is still an instigative reporter.
AARON: Iris is still at Central City Picture News, but their relationship is a little bit different. Cisco Ramon (Carlos Valdez) is like a gazillionaire. He’s living life like a playboy in his 20’s would as a billionaire.

Does Cisco even know what his abilities are at this point?
AARON: No.
TODD: No because there was no trigger point for his abilities.
AARON: He’s busy just being a billionaire. And Caitlin (Danielle Panabaker) is still a doctor and there’s Kid Flash (Keiyman Lonsdale) is out there.

He’s playing The Flash out there. How does Barry feel about that?
TODD: He feels fine.
AARON: He’s good with it.

He’s okay of somebody else takes on the hero mantle for a while then.
TODD: He’s so happy because everything that he ever wanted is now part of his life. I think the minute his mother was taken from him, he’d been thinking about “I wish” as any child would — “I wish I could have another day with my mom.” And now he’s also reunited with his dad, who died the last season, so he had that feeling as well. So right now, he’s so focused on just loving life and being able to be with his parents. That’s his primary goal.

For the viewers, we’re going to feel like this is a fake world and it’s going to be really weird for us to be inhabiting that world with him.
AARON: I think in the same regard, it was a different version when we went to Earth-2, but there was a familiarity. There were all the idiosyncrasies. I mean some of them were changed a little bit, but it’s them, but different. And we do the same thing in Flashpoint. It’s all of the characters you know and love. It’s just a slightly different version of them. So while things are a little bit different, it doesn’t take long for you to understand what those differences are, what it means to the world, and how it affects Barry. So it’s not going to feel like that much of a departure.

So following this theory, Zoom still exists then.
AARON: Yeah, I guess.
TODD: I guess. I mean, Zoom was an Earth-2 villain though. So Earth-2 hasn’t been affected yet.

It’s an interesting choice. It must be messing with your own head at a certain point.
TODD: Yeah. You start going down all these different timelines and at some point you’ve just got to be like: timey-whimey!

To see how complicated and intertwined the multiple timelines become and the ripple-effects down the timeline, be sure to tune in for the Season 3 premiere of THE FLASH on Tuesday, October 4th at 8:00 p.m. on the CW. You will see all your characters like you have never seen them before!