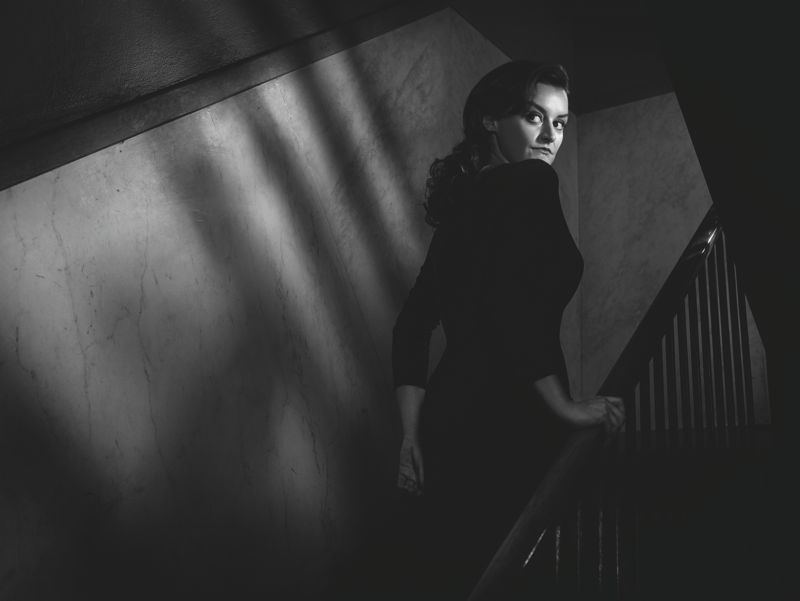 Season 3 of FX’s drama THE AMERICANS has been hair-raising as the stakes have been raised for both the Jennings and Martha Hanson (Alison Wright).  Martha, as secretary to FBI Agent Frank Gaad (Richard Thomas), was snared in a classic honey-trap when she married Clark aka Philip Jennings (Matthew Rhys) — a decision she is surely now regretting after a wireless recording device was found in the pen Martha placed in Agent Gaad’s office.  The resulting internal affairs investigation has put Martha in the cross-hairs — for if Agent Taffet (Jefferson Mays) does not suspect her, then Agent Stan Beeman (Noah Emmerich) certainly does.  So it is coming down to the wire to see if the greater threat lies in getting caught by the FBI or if the Jennings will decide Martha is too great a risk and take her out first.

In an exclusive interview, star Alison Wright talk about Martha’s sticky situation, her likelihood of surviving this season, and whether Martha really knows what is going on in the spy versus spy world swirling around her.

With Martha in the crosshairs right now, we are kind of terrified for her.  Where is she at right now?  Is she terrified herself?
ALISON:  After this last episode, she is in the worst spot she has been in by far.  She is really in a terrible position now.  It’s an uncontrollable situation.  It’s really truly dawning on her how bad it is and how deep trouble she is in.

It seems like Martha pulled it off pretty well in that second meeting with Agent Taffet and it seemed like that was the last hurdle.  But we also saw that Stan has his antenna up and is a bit interested in what Martha is up to.  Are we going to see a clash between Stan and Martha?
ALISON:  Martha is not a liar.  She is not even vaguely a duplicitous person and in this last episode where we saw Clark teaching her to lie, and that doesn’t sit well with her. She’s not going to be able to continue doing it.  It is not within her nature.  I think she finds it dishonorable. So although she got through that interview with Agent Taffet, I don’t think there was any happiness or relief that she got that she was able to keep him at bay for now.  She is in a really unhappy position.  Even if she were able to continue fooling people with the lies, it is not a place she can live in.

This is obviously going to eat away a little bit at her soul.  Will she start feeling a little less love for Clark because he put her in this situation or is she still madly in love with him?
ALISON:  [Laughs]  It is impossible for me to say where they are going to go with it because I’ve been wrong the whole season.  I have been wrong about everything I thought was going to happen.  She’s going to be put under a tremendous amount of pressure and having two such conflicting different beliefs is going to be a problem for her mentally.

At this point is she willing to turn on her own husband or is she so devoted to him that she could not fathom even turning on him?
ALISON:  I don’t think she would know what to turn him in for.  We know what Philip is, but she has no idea that people like that even exist.  She’s not in the CIA with the snoops and the spies.  She’s in the FBI, which is essentially the law, the police. She is not familiar with all the things, the honey-traps and false identities and stuff like that.  It’s not that familiar to her and it was not public knowledge at the time that these things were happening.  At the moment, all she has been willing to hear is that Clark does not work for internal affairs, that he works for somebody else and so far she hasn’t pushed to know more than that.  The blinders just went down upon hearing that and she hasn’t asked any more questions.  So she is not really focusing on who he is working for at the moment.  She’s just trying to get through this mess that she is in and not go to jail and not lose her husband and not loss her marriage and her job.  I don’t think she is poking around too much to find out exactly what the situation is because I think she has a feeling it is not going to be a good answer.

How terrifying was it for you as an actress to read the scripts for this season?
ALISON:  It was amazing! Each one was a surprise.  It was exciting to get the opportunity to play someone in such distress, and who knows what is going to happen to her.

Should we be praying for Martha and that she survives?  Because it seems like Philip might be willing to eliminate her as a threat opposed to having her expose him.
ALISON:  If that were the choice, then absolutely.  But Elizabeth might take that choice out his hands.

Was it surreal to step into Clark’s apartment, where Philip had preset up an apartment in case Martha wanted to see it out of the blue?  I know I was surprised when that happened.
ALISON:  I think she was too.  I think she was surprised and relieved that there was not another family living there or another women or anything unusual at all.  She was relieved that it seemed to be a normal apartment with normal things. It was a little bit of proof that he is a normal person.  It placated her fear — her unknown fear.  It was really cool that they wrote that in.

At this point, what would be your advice for Martha?  What would you want to tell her?
ALISON:  [Laughs] I’d probably tell her to get on the first Greyhound bus out of town. Get out of town.  That’s it.

What do you most admire about Martha?
ALISON:  I admire her ability to see the good in people and her positive loving nature.  She is quite fun.  She’s up for having fun and a laugh and trying to do the right thing.  She’s the everyday woman in a lot of ways.  I think she has a certain innocence that perhaps no one else on the show has — not even Paige (Holly Taylor) anymore at this point.  I think Martha is a good woman.

For you, what has been the most fun portraying Martha?
ALISON:  Right now where we are getting to and where we have been in the past few episodes.  It’s been really interesting to me to start investigating women in different states of denial and how that happens.  I’ve been concentrating a lot on the wives of serial killers and the wives of men that were doing these shady things for years, how they behaved and what they thought they knew or what were possible alarm bells or how they justified that.  So that and thinking about unconscious fears and subconscious behavior — that has been super exciting for me to delve into as research.  As an actress, that’s the stuff that I like.

Then what is the hardest part of portraying Martha?
ALISON:  [Laughs]  Sometimes looking in the mirror when I’m in make up and costume is very hard. But there’s really nothing hard about it.  It’s all been amazing, just fantastic.

What kind of song or music would best describe who Martha is as a person?
ALISON:   I’d be inclined to say the late 1970’s soft disco music.

As we head towards the Season 3 finale, which characters would you recommend we keep a close eye on?
ALISON:  I think anybody with half a brain cell would be keyed into Paige and what is happening with her in the next two episodes.  It is wonderful that they made that reveal to her not as the season finale and it allowed for so much more to happen after she found out about her parents.  But it is all up for grabs at the moment.  I will also definitely say, keep you eyes on Martha.  It’s going to be really quite shocking.  For me, this season, the writing has been a god-send.  There has been so many exciting and unpredictable things for Martha.  Everybody thought Martha was going to be dead by the fifth episode of the first season.  So they are doing a great job keeping everybody still guessing.

Any other teasers about what is upcoming?
ALISON:  I would say after the horrendous week Martha had at the office, passing the interviews and managing to fool everybody so far, is not sitting well with her and she cannot keep up with it and she cannot continue like she has been.

To find out in the final two episodes of this season whether Martha completely cracks or if she even makes it out alive, be sure to tune in for all new episodes of THE AMERICANS on Wednesdays at 10:00 p.m. on FX.