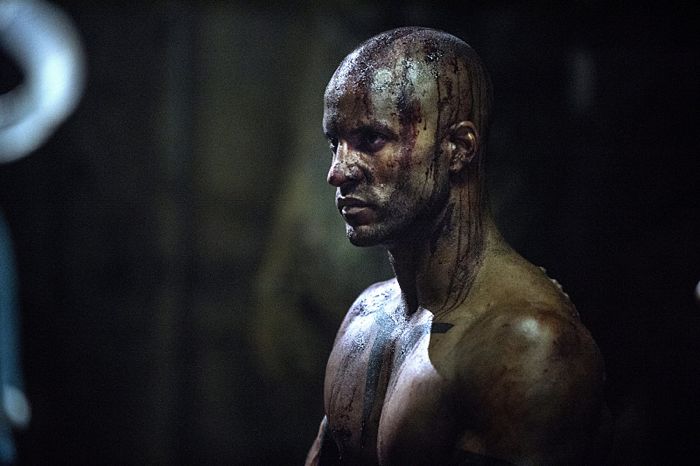 Season 2 of THE 100 has taken all its characters on perilous journeys, but none more so than for Lincoln (Ricky Whittle), the Grounder who fell so completely in love that he risked everything to be with the woman he loved.  After saving Octavia (Marie Avgeropoulos), Lincoln was captured by Reapers and taken to Mount Weather where he was subjected to inhuman torture in order to recondition him and turn him into a Reaper.  In the last episode, the full extent of Lincoln’s conversion was revealed as he attacked Octavia and her brother Bellamy (Bob Morley) with no recognition in his eyes and his humanity stripped away.

In an exclusive interview, star Ricky Whittle talked about the tough road ahead for Lincoln and whether he will ever be the same after the damage done physically, mentally, and emotionally by the Mount Weather physicians.

Now that we have seen Lincoln in his new brain-washed state, is that how he is going to be for a while, or is there going to be a way to undue some of that brainwashing?
RICKY:  Lincoln is going to be a big vehicle to explain what is going on with the Reapers and what is going on with the Mountain Men and how dark they are prepared to go.  The show has always been good at showing everyone’s perspective and the Mountain Men are just very much looking out for their own.  We perceive them as the bad guys because they are turning Grounders into Reapers and they are trying to get the blood out of the 48.  But from their perspective, they are just starting to survive.  But through Lincoln, we see what depths they are prepared to go to and how much they value the Grounders’ lives.  It is about how we can help their people [Grounders] stand up to those at Mount Weather.  Lincoln is definitely going through the mill in this next episode.  It will be very dark and very traumatic for him — and Octavia, as well.  It is like a duty to the topic:  drugs and addiction are very huge things and it is our duty on the show to show that it is not a light subject and it won’t just disappear.  So I think if Lincoln were to survive, this drug thing would still be a problem.  It is a very real thing and I think our writers are good at that continuity and, unfortunately, now through forcing this drug on Lincoln that he is now cursed for the rest of his days.  It’s always going to be there, but can they bring Lincoln back to some sort of resemblance of his true self?

He didn’t even seem to recognize Octavia.  Is there still some mental thought going on inside him or has Lincoln been dehumanized completely?
RICKY:  This is the talk I had with the writers at the time, Lincoln is definitely there, but by now the hunger has taken over.  Obviously, this being sci-fi and with artistic license, we are taking it a bit further and it’s very dramatic.  So this thing has taken over him completely to the point he is eating flesh.  It’s about how he’s become this cannibal, this Reaper.  He’s basically this rage-filled thing who is just hungry for this drug.  It is going to be explained more throughout this season.  Why they are so enraged and why they are so desperate for human flesh.  It’s going to be very traumatic.  But, hopefully, we can kind of bring him back.  But you never know.  The show is very good at giving the fans what they need and not what they want.  Everyone wants Lincoln and Octavia to be happy and have children and live in the forest with the butterflies.  But the show is not going to do that.  It’s really going to drag them through the trenches, and this terrible situation they find themselves in — will Lincoln survive, never the mind getting back to his former self.  I think the fans are going to be really shocked by this episode.

Which for you has been harder? Has it been harder to play a warrior Grounder or this animalistic Reaper?
RICKY:  For me, I’m more of a fan of Season 1 Lincoln where he was the strong silent type.  You really didn’t know what he was thinking.  When he spoke, it was with purpose.  When he moved, it was with purpose.  Everything kind of displayed in his eyes.  Whereas, when you are a Reaper — I did a lot of research after Jason [Rothenberg] told me about the storyline at Comic-Con in San Diego — so I went and did my research and watched documentaries and TV shows about addiction and rage and people on bath salts. There is some really traumatic stuff.  It really is quite shocking that, although this is sci-fi and we do take it a bit further, this happens.   It is not necessarily all fiction.  Certain drugs can take you to a point of rage where you will become a cannibal. There’s various stories in the papers in the last few years where people on drugs become cannibals and doing outrageous things.  It’s sad and it’s shocking.  This show has a duty to show that drugs are a serious problem and — for a character so pure as Lincoln, who is strong-willed and with such a strong moral center — if someone like Lincoln can be overtaken, then what hope is there for anyone else?  It really is a huge deal.  It’s very sad what is going to be portrayed in this next episode and throughout the season. But it is a very real problem and, unfortunately, it is not such fiction as we think.

For you, as an actor, what has been the best part of portraying these characters who populate future Earth?  The best part of portraying a Grounder versus a Reaper.  What has been interesting about portraying those kinds of characters?
RICKY:  To me, it was fun being a Grounder in the beginning where Lincoln didn’t want to give up anything.  Like in Episode 7, where he was physically tortured for the antidote and he refused to speak.  Here is this strong warrior who will die for his cause and he wouldn’t let anyone bully him into something he didn’t want to do.  He’s a warrior whose running around fighting battles, which as an actor is great fun and it is great to portray emotions without dialogue.  He is the strong silent type, but you knew he cared for Octavia because of the way he looked at her.  It was fun to play that kind of chemistry without dialogue and I loved that.  As a Reaper, it’s hard.  You go to a different and tough place.  You have a duty to keep it reasonably real.  I guess what I liked about it is that we pushed a little bit further and really go dark.  I put everything on the line in these episodes and ended up with cuts and bruises and abrasions.  It is really going to be an action-packed episode.  It’s very dark and very scary.  I would be finishing up the day with wounds and the make-up department would try to cover up the blood with bandages and things because it was very intense and physical.  I like to give 110% every time, so it was very long days.  But I’m very happy with the final piece.

Do you think there is a place for Lincoln at all?  It doesn’t seem like he is comfortable amongst the Reapers or the Grounders and I’m not even sure he likes the Mount Weather people.  It there ultimately going to be a place for him?
RICKY:  I don’t think Lincoln has ever had a place.  He has always been a man without a country.  Even when we first saw him, he was in a cave rather than with his people in the village.  He is very much a loner and has his own issues. He was very happy on his own.  Then he fell for Octavia. That was the only important thing he had in his life:  Octavia.  We saw that through the sacrifices that they both made for each other.  Even at the beginning of this season, he sacrificed by going back to his village even knowing he was not welcome, just to protect her.  Then he was captured and that is where it all kicked off for him.  This is going to take it even further.  He’s a Reaper.  So it is definitely going to have repercussions throughout the rest of the season.  It’s always going to be with him.  Drug addiction is not just something that goes away.  It’s going to stay with him. So his dynamics with the various tribes and characters is definitely going to change.  If anything, he is going to be more on his own than previously.  He has been tortured a lot.  But, fortunately, he always seems to want to do the right thing and always trying to be good.  He wants to do the right thing by others.  So the more he gets tortured, the more we feel for him because he is only trying to do the right thing.

To see whether Lincoln can be saved and if he will find a way to regain his humanity, be sure to tune in for an all new episode of THE 100 on Wednesday, December 10th at 9:00 p.m. on the CW.