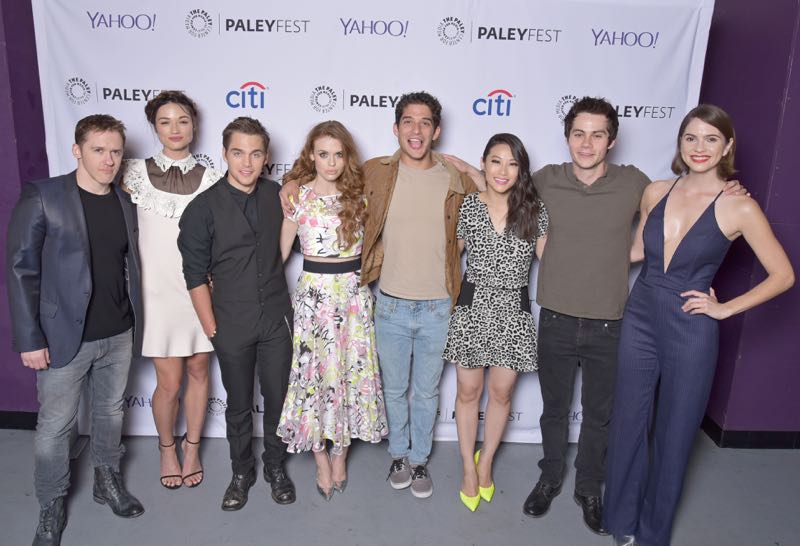 Every season of TEEN WOLF has managed to raise the bar creatively for its characters and stars.  Season 5 promises to do it again and we are waiting with baited breath for every delicious second of it.  It is said to be a season of secrets and separations, but when asked about it at the recent PaleyFest celebration for TEEN WOLF, the cast and producer Jeff Davis all seemed to be enjoying the fact that everyone is working so strongly together as part of Scott’s pack to combat the evil forces that continue to rise up in Beacon Hills.  When lives on the line, they all know what their priority is: to save the world — oh, and pass high school and graduate.  But just what about the looming graduation date?  Will Scott be able to ever leave Beacon Hills, or any of his pack for that matter, if they are needed to be the ones to save the world every day?

In exclusive red carpet interviews at PaleyFest, stars Tyler Posey, Dylan O’Brien, Holland Roden, Arden Cho, Shelley Hennig, Dylan Sprayberry and executive producer Jeff Davis talked about the challenges ahead on all fronts for the teen heroes — both on the battlefield and in their personal lives.’

Tyler Posey and co-star Arden Cho gave funny responses to the question of “how hot is the romance going to be between Scott and Kira this season”:  Arden confidently rated their sizzling hot scenes as a solid 10, while co-star Posey rated the scenes as a maybe 7.  He then laughed when called out on the fact that Arden thought the scenes were a lot hotter.  Posey also reassured that the Scott/Stiles bromance and friendship is as strong as ever, though each will be pulled and tested this season in ways that may include a physical separation as the supernatural forces pull them in different directions.

Arden Cho is also ecstatic that her character Kira is part of Scott’s pack this season and gets to join in more of the action.  She’s also looking forward to the double-dates between Scott and Kira, and Stiles and Malia.  She teased that everyone on the show gets a special romance this season, so even lonely Lydia may now have someone in her life.

Co-star Holland Roden seemed to think that Lydia was being more of a loner this season and on her own crime-fighting journey.  She also is enjoying all the girl-on-girl fights and remains unsure just what Lydia and Peter’s relationship (if any) is at this point.  She just knows that Peter continues to haunt Lydia’s dreams.

Dylan O’Brien gave a shout-out to the cool relationship between Stiles and his dad this season and teased Sheriff Stilinski’s blossoming romance coming up in Season 5.  As or the Stiles/Malia relationship, O’Brien believes Stiles is completely supportive of Malia’s new-found interest in school and working towards graduation — though he is unsure what Jeff Davis has planned for the Malia/Stiles relationship as the season unfolds.

Shelley Hennig was much more confident about Stiles and Malia and reassured that coyotes mate for life.  So for Malia, she’s all in.  There’s no doubts on her side.  Hennig loves the special, non-traditional relationship that Stiles and Malia has and feels that working with O’Brien just makes the Stiles/Malia relationship just magically come to life.  She loves Malia so much that she would not change a thing about her.

One cute moment on the carpet was in the Dylan Sprayberry interview as he and co-star Posey shared a quick moment to confer during the interview.  Was Posey perhaps giving encouragement to the shy star as he chatted with press about questions he surely needed to avoid as best as possible with their producer Jeff Davis so close by? Whatever the advice, Sprayberry was confident as he shared that there is a new actress joining the show this season that may or may not catch his character Liam’s eye.  As for Liam and Mason’s friendship, it is as strong as ever though Mason has a lot of questions after seeing that bezerker explode last season.

During the Q&A panel, executive producer Jeff Davis took a good-natured jab at the CW for “stealing” all his show’s stars (perhaps referring to the loss of Colton Haynes and now Daniel Sharman), but also hastened to reassure that the show will be seeing the return of some familiar faces in Season 5 and let it slip that he had just spoken to Sharman on the phone a few days before.

Hilariously, Holland Roden compared Lydia’s journey through the five seasons on TEEN WOLF to a LOST-like experience.  Gotta love it when stars can use other hit shows to compare against their own and make it all sounds like their characters may live in the same universe.  It would explain a lot about ABC’s show LOST if it were somehow tied to the Teen Wolf verse.  Both had supernatural creatures after all!

In a nice surprise, former co-star Crystal Reed joined the cast of TEEN WOLF on stage during the Q&A and she gave a shout-out to Ian Bohen (who plays Peter) as having been one of the reasons she remembered filming the pilot episode of TEEN WOLF so fondly.  Apparently, Ian is just so present in the scenes that she really felt her character Allison’s loss of her aunt and as a result and it made the experience so much more incredible and memorable for her.  She also loved doing Allison’s death scene with co-star Tyler Posey, who also remembered filming that tragic death scene with fondness as it turned out so beautifully — heart-felt and heart-breaking all at the same time.  Posey described it as “you lose a part of yourself when characters die” and like his character Scott, he still misses Allison. He also said it is difficult to say goodbye, but then hastened to add that it is never really a “goodbye” as they still keep in touch. Such a lovely shout-out to Crystal!

(Side note:  Tyler Posey was practically bouncing off walls with energy and happiness for the panel as when introduced, he literally came hopping in like a kangaroo.  For a guy that portrays a werewolf for a living, he’s pretty good at the kangaroo hopping too.  Maybe a hint as something he’s working on the side or something he’s hopeful to do in the future, perhaps?)

With worries about possible separations and secrets driving the characters apart in Season 5, Jeff Davis hastened to reassure that the real romance of Teen WOLF has always been a bromance — the friendships between the characters are essential and there is no way that the show would destroy those forever.  As he put it, Teen Wolf is very much about friendships and even the romances have always started as friendships first.  That is the underlying core of the show:  the strength of the bonds of friendship no matter what trials they may face along the way.

It was a fun night of warm camaraderie and some reminiscing amongst the cast.  They also teased that co-star Tyler Hoechlin may not be a regular in Season 5, but he will be on the show even amongst his new movie filming schedule.

TEEN WOLF will return Summer of 2015 on MTV for Season 5.  You are not going to want to miss it!  Big surprises ahead!