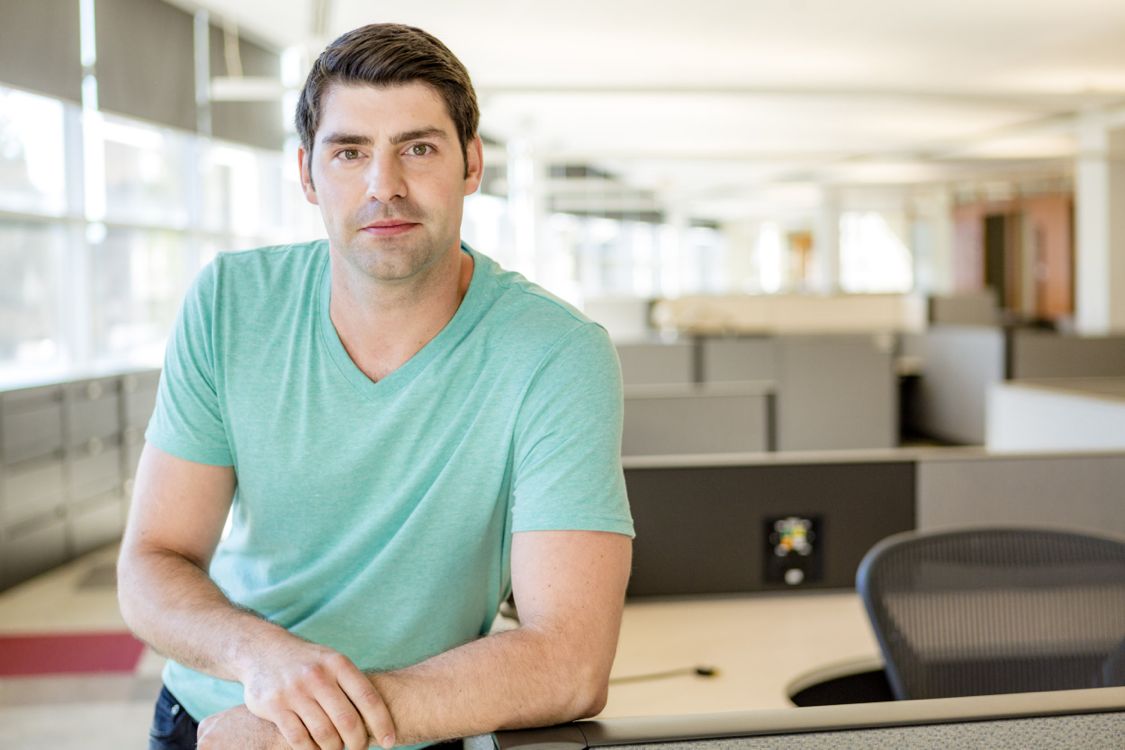 Previously seen in the drama series ROOKIE BLUE Hallmark’s A GIFT WRAPPED CHRISTMAS, and continuing his streak of newfound romantic roles, Travis Milne stars in the new Hallmark Channel film SUMMER LOVE, in which he portrays a corporate executive who finds himself suddenly falling for a new summer intern. In an exclusive interview, Travis Milne previews SUMMER LOVE and the fun he had filming with co-stars Rachael Leigh Cook and Lucas Bryant.

What drew you to the role of Will in the Hallmark film SUMMER LOVE?
TRAVIS: I was knee-deep in my basement renovation when my phone started to ring and my agent told me that I had been offered a role in the film. My phone was at 2% battery life and I had just enough time to read through the entire script, and I fell in love with the charm of the project and the character.

How would you describe your character Will? What do you most admire about him?
TRAVIS: I admire his optimism. He has a genuine lovability which I focused on maintaining throughout working on the film. Also Lynne [Stopkewich] and Beth [Grossbard] really allowed me and encouraged me to keep the characters mannerisms close to who I am in real life.

What is Will’s connection to Maya (Rachael Leigh Cook) and Colin (Lucas Bryant) in SUMMER LOVE? Where do all their lives intersect?
TRAVIS: Will and Colin have a friendship that is closer to a brotherhood, and most of the time brothers do not agree on much, but they have both found a way to tolerate each other and appreciate their pros and cons. Will falls head over heels with Maya initially, but it is hard to tell if it is just infatuation or of it’s the real deal. This is because Will has a bit of a bad boy rap with the ladies.

What was the funnest part of working with Lucas Bryant? Your Instagram photos made it look you and Lucas had a lot of laughs.
TRAVIS: My childhood friend since I was 12 is also named Lukas, his is with a “K” though. So when I first met Lucas, I felt instantly like, “we are going to be friends.” Working with him was a blast and we still send pictures of stuff that we are constructing back-and-forth to one other, even know the film is wrapped. In a couple of weeks I’m going to redo my rooftop deck and he gave me the architectural design idea that I needed. (Thanks, man!)

You have been on some cool shows from ROOKIE BLUE to SAVING HOPE and now the Hallmark films A GIFT WRAPPED CHRISTMAS and now SUMMER LOVE. What kinds of roles are you looking for when you are considering a project?
TRAVIS: I just like working. But if I can find a character that is in line with who I am, it helps me bring that character to life more. I always try to stay as genuine as possible and sometimes that gets me the role and sometimes it doesn’t. You just have to be confident enough to be yourself while playing the character and I find the audience can connect more to you as a result, as well.

What is one thing you have learned that has made you a better actor from these projects?
TRAVIS: Every project makes you a little better. It’s like a trade or craft – you learn what works and what doesn’t work by just trying stuff. Some actor don’t like to watch their projects once they’re completed, but I use them as a tool for improvement.

What has been the best advice you have received in your career? And what advice would you offer other aspiring actors?
TRAVIS: I have received a plethora of advice throughout my career so far, but the most useful advice that I utilize everyday is something that I learned from my mother, which is to “always remain positive.” Acting is fun and should always be fun, but you have to take your career very seriously and don’t get sidetracked by the rejection you will inevitably receive from time to time.

If you could revisit any of your previous roles, which would it be and why?
TRAVIS: I would love to revisit Chris on ROOKIE BLUE because it was such a blast working on it. There were times where I don’t think I took it seriously enough though. I guess that’s just youth.

What have been some of your favorite scenes to film from your Hallmark films?
TRAVIS: We shot on location in Squamish, British Columbia for a week and I have to say, because of the scenery, it definitely took the cake. After the first week of shooting, I was tempted to buy a cabin out there or something. But I realized after my first impulse that doing something that rash may not be the move. I already have my hands full with the place I’m currently renovating solo.

What has been one of the biggest perks of reaching this point in your career?
TRAVIS: I like to audition for everything because I just love working. It is nice to be able to have a bit of a choice now though. Sometimes, as actors, were not defined by what we do, but by what we choose not to do.

What would be a role or challenge that you would like to embrace in your next film or television project?
TRAVIS: Comedy – I would love to do a half-hour comedic show. When I started doing this, all I wanted to do was be the next Kelso, and then I went through this really dark phase where I only wanted to play really dramatic characters and I grew a beard. I realized I’m too affected by the roles that I play, however and if I play comedic characters, I generally stay more positive as a person. Maybe they will green-light something called THAT 90’S SHOW and I can play a surfer dude who just crashes on people’s couches.

And if you are able to share, what is next for you? Any new TV projects or films that fans can look forward to?
TRAVIS: Other than SUMMER LOVE, I don’t have any other projects that I’m currently working on. [Laughs] If you got something, let me know. I just try to keep myself busy with fixing my house when I’m not working on any acting projects and my social media posts and updates can be found @travismilne on both Instagram and Twitter. So if you’re interested in seeing any of the stuff that I build, you can see it on there.

To see what fun escapades Travis and Lucas Bryant have in their dashing roles in Hallmark’s latest film, be sure to tune in for the premiere of SUMMER LOVE on Saturday, August 20th at 9:00 p.m. on the Hallmark Channel — and be sure to follow his latest craft and wood-making endeavors through his social media accounts.