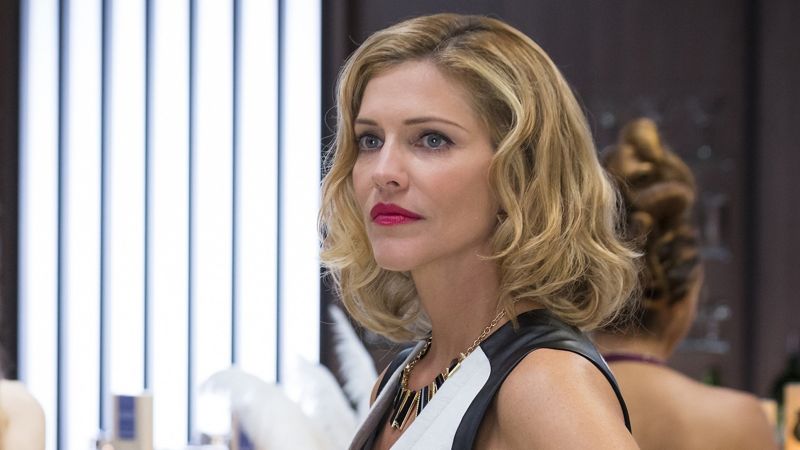 With a masterful magician’s stroke, USA Network’s drama series SUITS managed to surprise viewers last week by introducing Evan Smith (Tricia Helfer), who everyone thought was going to be another one of Harvey’s (Gabriel Macht) romantic liaisons — but to everyone’s dismay — Evan proved a worthy adversary and managed to get the drop on Harvey by producing a video tape placing Donna (Sarah Rafferty) in a precarious legal position and threatening to turn Donna into the District Attorney’s office.  It was as if SUITS were giving a sly nod to Tricia Helfer’s days as a Cylon on the series BATTLESTAR GALACTICA, where she played a wolf in sheep’s clothing and proved that a beautiful woman should never be under-estimated.

In an exclusive interview, Tricia Helfer talked about her guest-starring role and getting the drop on Harvey, as well as reuniting with her former co-star Patrick Adams.

You seem to be the woman of the hour right now with such a juicy role on SUITS.  What initially drew you to the role of Evan Smith?
TRICIA:  The first episode, which aired last week, was being directed by Patrick Adams and I had done a pilot for a TV series a couple years ago with Patrick, where he played my younger brother, and I just adored him.  I thought he was not only a really good actor, but a really great guy, was really bright, and had a lot going for him.  So I thought, “Wow, he’s directing now. He’s a talented young man.”  So I thought I would jump on board and have some fun with them.

When you read about the role and it said you would be playing the female-version of Harvey Specter, did you go, “Wait? I supposed to play what?!”
TRICIA:  [Laughs] I’ve seen the show, so I got the references they were talking about — somebody very sure of themselves, very good at their job, very on point, fantastic attorney, somebody looking out for themselves, but wants to win.  So playing that type of character is fun.    Playing a very strong female character is a lot of fun, so why wouldn’t I do that, right?!

Even so, Harvey sometimes travels a slippery-slope in the legal realm. Maybe you were thinking, “hey, that’s not me!”
TRICIA:  [Laughs] Well, not all characters are me, personally.  I’ve played bank robbers, serial killers, and robots.  So playing a lawyer with a little bit of a slippery-side on the legal side — I also played a lawyer with the same kind of disposition, shall we say, on THE FIRM for the season it was on — so it makes it for fun.  There’s a lot of gray areas in the law, unfortunately.

How do you see your character Evan?  Who is she?
TRICIA:  She is definitely, as you say, on a slippery-slope on this case.  But I did see her as somebody that wasn’t necessarily dirty.  She may not necessarily know exactly what her clients are up to.  She wants to win.  It’s a game after she meets Harvey.  It’s not a game to the extent that the job isn’t the most important thing, it’s just to the extent in beating Harvey.  It is a chess-match. It’s a game to her on the side.  But I don’t think she necessarily knows to the extent what her clients know.  So I don’t see Evan as being dirty.  Whereas the character I played on THE FIRM, I think she knew a little bit more than she let on — and I don’t think that is the case with Evan.  I could be wrong.  There is only two episodes and where we leave it tonight, the way I see it is Evan could come back on another case.  So I don’t necessarily think she is dirty.

Would Evan actually stand behind her threat to turn in Donna to the DA’s office? That’s a really big thing to pull.
TRICIA:  It is.  But if Donna did what she thinks she did, that is also not a good thing to do.  So I think she absolutely would follow through with her threat.

Uh oh.  So Evan is a bit of a shark.
TRICIA:  Exactly! You’ll have to watch tonight and see.

The show teased initially that there might be a romantic relationship between Evan and Harvey.  Is that a possibility or is that off the table at this point?
TRICIA:  I won’t say what happens tonight, but in the future there could always be a possibility.  I think these are two people that if they got together, would they end up happily ever after? No.  They are too competitive, too similar to each other.  But I think if they had met under different circumstances or a different case, especially now that she has kind of brought Donna into it or Donna has injected herself into it in a compromising way.  I think that would be a very hard road to go down just because of the way Harvey feels about Donna.  But there is certainly attraction there and you never know what would happen at a different time in a different place.

How does Evan see Harvey?  Does she just see him as the competition?  What’s going through her head?
TRICIA:  She definitely sees him as competition. Again, a different time, different place, they could have some fun together.  But especially after what Donna has done, it does raise the stakes.  The case is also a serious case.  People have lost their lives and there are possibly other lives at stake.  So it’s not like she’s “he’s cute, I’m going to forget about my job.”  She’s very on point with her job.  She sees Harvey as a formidable foe, but she sees him as someone she could have fun with as well.

What was it like working in your scenes with Gabriel Macht?
TRICIA:  It is a great set.  They have the luxury of a lot of time.  I was like, “Wow, you guys get 8-day episodes? You have a lot of time to do this.”  So many shows now cram everything into 6 days or 7 days. So they certainly have the luxury of time.  Working with both Gabriel and Patrick was great.  I’ve worked with Patrick before and he was really great to work with both times, and I had just met Gabriel for the first time and he was lovely, very welcoming.  I think he was going through a house move with young children.  So I think he was kind of personally pulled in all directions.  The poor guy was very tired when we were working.  But he was lovely to work with, just very warm and welcoming.

Having worked with Patrick before, what was it like working with him this time as a director?
TRICIA:  It was great! The poor thing, he was sicker than a dog.  It was like Gabriel was tired and Patrick was sick.  When a flu goes around a set, it is not a fun thing.  I have a lot of animals, so I liken it to kennel-cough.  So the first episode, a lot of the crew had the flu and Patrick did as well.  So he had the double-duty of acting and directing while he was with a fever and everything.  But he did a fantastic job.  Patrick has a wonderful eye.  He’s a really good photographer, which I learned about the first time we worked together.  I think that is great for him getting into directing because he already has a certain artistic eye and he knows about lens and lighting and things like that.  That’s an added benefit and the rest is story-telling.  So he was great to work with. Very focused.  He knew what he wanted and then relied upon his crew, which is also instrumental and a good thing for directors to be able to do.

You may have also crossed paths with Gina Torres, who plays Jessica on the show. Did you two have a chance to compare notes coming from a similar TV background — playing iconic women on iconic sci-fi shows?
TRICIA:  [Laughs] I didn’t get to work with her, unfortunately.  I think Gina is fantastic.  I had met her years ago when I first started acting, when she was on FIREFLY.  I had a friend on FIREFLY, so I met her way back when and she was just so lovely and such a wonderful person. She certainly played a kick-ass character on that show.  So we did not get a chance to reminisce about playing strong female characters on sci-fi shows.  We just said, “Hello.”  But, unfortunately, I did not get to do any scenes with her.

Fans would have loved that.  That would have been super fun.
TRICIA:  It was more that I barely even saw her.  It was more like big smiles and waving “Hi!” as we’re passing each other in different golf carts.

Assuming you’re not going to be regular on SUITS, what are you doing next?
TRICIA:  We just had ASCENSION air in the States and it is currently airing in Canada.  Two nights ago it just had its third episode, so it is half-way through its airing and I think it is almost done airing in the U.K.  It has been doing well in both places.  So I’ve just been kind of doing that right now and waiting to see if we are doing more of that, or if I’m moving on to something else.  I’m also in the midst of pitching a project that I’m really hoping to get off the ground.  It’s a passion project of mine based on the book series “Heartsick.”  I have been working to try and get that going and find it a home.  So I can’t say too much about it because it literally in the negotiation stage and I’m not sure I’m going to be able to hold onto it or not.  But it is just a fantastic series of books.  So fingers-crossed that I’ll have good news in a couple of weeks.

You are also very passionate about your charity work.  Is there something upcoming that fans can look forward to like with Acting Outlaws?
TRICIA:  Acting Outlaws, yes.  We have signed on to do the Tulip Ride again in Seattle, April 18th.  It will be our third year and we are very proud to say that we have helped them raise a lot of money so far — a little over $30K in the last 3 years — and that goes to the Seattle Humane Society and Seattle Red Cross.  So we are going back up this year to join in that ride.  That’s the next thing we are doing and, of course, our calendar is for sale still on Redbubble where you can actually time your month.  So if you didn’t know about the calendar and you want to buy it, you don’t have to go, “Well, I’ve just wasted the first 3 months.”  You can actually buy it from April this year to April next year, or whenever you want it to go from.  It’s made to order, so they can design it to start on any month.

If you could offer any teasers for the fans about tonight’s new episode of SUITS, how would you describe it?
TRICIA:  I would say that Donna definitely has some explaining to do.  It’s going to potentially cause a riff, but she’s got a lot of people rooting for her and maybe we get to see how Harvey really feels. Evan is certainly there to rile them up.

Will Evan stick to her guns or will she want to work with them?
TRICIA:  Evan is somebody who sticks to her guns.  So watch out!

To see whether Donna will end up taking a bullet for the team or whether Evan will find a better way to win her case, be sure to tune in for tonight’s all new episode of SUITS at 10:00 p.m. on USA Network.