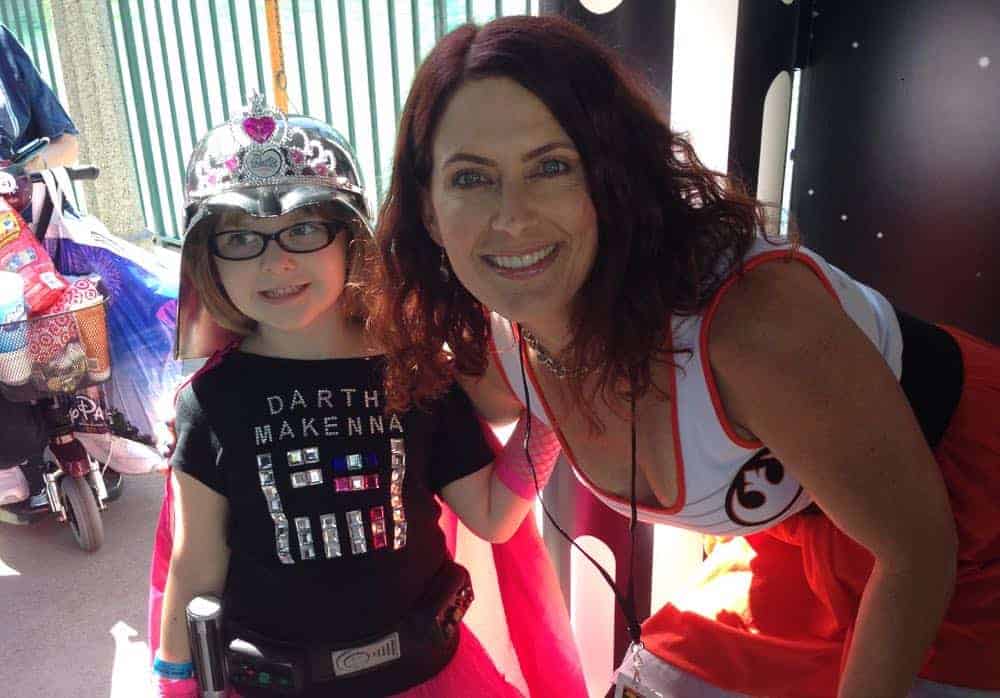 Dream jobs rarely appear out of thin air. It takes years of hard work, combined with talent and a fair amount of good fortune at being at the right place at the right time. For Vanessa Marshall, her hard work and talent put in on the path of getting the job that many only dream of: to be a voice over actor working on some of the hottest animated shows. Vanessa not only knows that she scored a dream job, she relishes every second of it. In an exclusive interview, Vanessa talks about the appeal and work that goes into being a voice actor and reflects a bit about two key female roles she is known for in Disney XD’s STAR WARS: REBELS and Disney XD’s GUARDIANS OF THE GALAXY.

What initially appealed to you about becoming a voice actor?
VANESSA: The voiceover community is so loving and kind. I felt like I finally found my people! There are lots of stand-up comedians (like myself) in the community, so we spend a majority of our time cracking each other up and laughing. There is nothing better!

How would you describe what it is like to be a voice actor?
VANESSA: On a daily basis, I get auditions from my voiceover agency. I record and send them back as soon as possible. If and when I book any of those jobs, I venture out to a voiceover studio in town to officially record them. I also have radio stations all over the world, for whom I am on call. They send me things to read via email, and then I record and send those back as well. When I am not working, I am taking classes.

And I always try to keep a work/life balance. I find when my heart is full, my work is better. That is so important. But overall, every day is different. It’s an ever-changing adventure!

How do you choose your projects?
VANESSA: I have yet to find a project that I would choose not to work on! So far, so good. If I book the job, I usually choose to do it. I am grateful for the quality of work my voiceover agency sends to me. Makes it very easy to say yes!

What would you say is the trick to successfully landing a voice actor role?
VANESSA: I recommend making specific acting choices, having an attitude of humility and gratitude, and taking a lot of classes. I am an eternal student and care deeply about staying connected, current, and nimble. When I focus on what is right instead of what is wrong, I tend to book more work. I try to be positive, be of service, and have an open mind. All of these things help me to care about the process, rather than the results. Ironically, this attitude seems to bring about the best results.

Any favorite projects that you have gotten to work on?
VANESSA: I was honored to play Hera in STAR WARS: REBELS. As a huge Star Wars fan, that was a dream come true! I also loved being the voice of BIG BROTHER for CBS, as well as the voice of HGTV for many years. It was fun to play a grape in a bunch of Welch’s Grape Juice commercials too!

What has been one thing you haven taken away from your work on both STAR WARS: REBELS and the animated version of GUARDIANS OF THE GALAXY?
VANESSA: I am very happy to see such strong female characters in animation. Both Hera and Gamora are such powerful role models. I felt very lucky to get to explore those iconic characters and then get to hear fan feedback that that strength translated. It was deeply satisfying. Perhaps all my martial arts training helped me inhabit those roles? I hope so!

What is the best part about voicing the character of Hera Syndulla on STAR WARS: REBELS?
VANESSA: Getting to connect with the Star Wars fans, most of whom will be my friends forever.

What is the best part about voicing the character of Gamora in the animated version of GUARDIANS OF THE GALAXY?
VANESSA: I really enjoy the chemistry between cast members on GUARDIANS OF THE GALAXY. We goof around a lot in our record sessions, and yet we still get tons of work done. It’s awesome. For example, I like to breakdance, while Kevin Michael Richardson (Groot) beat boxes, and I always bring tons of cool food for us to eat (I order us Katz’s Deli from NYC).

You would think that these things would distract us and waste time, that we would run late, and sessions would take forever, but when the director calls us together to record, we cruise right through the script like magic, and we always finish early. Not on time, but early. Despite all the diversions and silly things we do! I hope the viewers have as much fun as we do when they finally watch the show.

What has been the biggest challenge working as a voice actor?
VANESSA: Saying goodbye to cast members when shows end. It is inevitable. It is part of the business. Things come and go. The only constant is change. I suppose it makes us all appreciate those moments when we are lucky enough to have them. And we will always be like family!

What have you learned from all your years as a working voice actor?
VANESSA: How important it is to give back. Dee Bradley Baker is the best example of this. I love his website: www.Iwanttobeavoiceactor.com. He has created an excellent site to try and help others. I admire Dee and try to emulate his generosity of spirit. He is a true pro.

Then what has surprised you most about your career so far?
VANESSA: How wide a range one can have as a voice actor. One can cross all kinds of lines in terms of gender, age and even race. For example, I played Irwin on the GRIM ADVENTURES OF BILLY AND MANDY, and I was also shocked to book the voice of the female narrator for JANE THE VIRGIN.

At this stage of your career, what do you think you have learned from the amazing variety of roles and projects you have worked on?
VANESSA: To never give up. Anything is possible! I have heard it said, “Don’t quit before the miracle!” #Truth

Then what are the perks of where you are in your career right now?
VANESSA: Getting to talk to Dave Filoni from time to time about all things Star Wars. I will never forget, at the end of a session in season 2 of REBELS, Dave stayed after to discuss the Yoda arc in Season 6 of THE CLONE WARS. I was blown away. It was like he was channeling George Lucas himself. I couldn’t believe that this was my life. That was a major perk!

If there were one role you would like to revisit, which would it be and why?
VANESSA: Mary Jane from THE SPECTACULAR SPIDER-MAN. Only because I never wanted that show to end! That was another terrific cast and a brilliantly written show.

Do any of your characters and the situations they find themselves in ever leave a lasting impression on you?
VANESSA: When I played Dr. Strangelove in METAL GEAR SOLID V: THE PHANTOM PAIN. Her final death scene still haunts me. Kris Zimmerman was a brilliant director as always!

Has there been any great advice you have gotten? What advice would you offer to other upcoming and aspiring voice actors?
VANESSA: Again, Dee Bradley Baker’s site has given me all the advice I need. I can’t recommend it enough.

At a time when women’s voices are rising to be heard and respected around the country and world, what do you recommend your fans do to lend support in that endeavor?
VANESSA: When one person speaks up, it gives others permission to do the same! So, find your truth, speak your truth, and know that you are not alone. That helps us all! In terms of supporting females in the world of voiceover, you can watch our shows, “like” and follow us on social media, and if there are action figures, you can go buy them! This lets folks know that we have a fanbase and can make an impact!

From your view point, what lessons can be gleaned from the “MeToo” era?
VANESSA: Funny you should ask! I am currently writing my third one woman show on that topic. Stay tuned!

Do you have any other upcoming projects that you can share that fans should keep an eye out for?
VANESSA: STAR WARS: REBELS, The Complete Fourth Season is now available on Blu-ray and DVD. You can continue to watch new episodes of STAR WARS FORCES OF DESTINY on Disney’s YouTube Channel, as well as GUARDIANS OF THE GALAXY on Disney XD. I was also in the recent TEEN TITANS GO! To the Movies, and you can catch me in episodes of BEN 10 on Cartoon Network and RISE OF THE MUTANT NINJA TURTLES on Nickelodeon.

I have all kinds of amazing new video games and cartoons coming soon too. I will announce them as soon as I am allowed. Check Twitter @vanmarshall and Instagram @vanessamarshall1138 for updates.