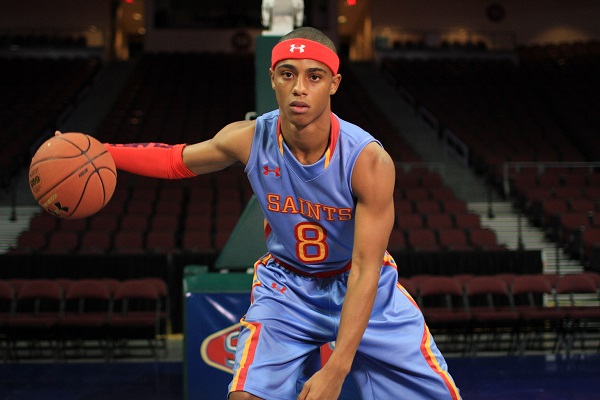 One of the hottest new faces in television is actor Keith Powers, who currently co-stars in both MTV’s FAKING IT and Yahoo Screen’s SIN CITY SAINTS.  Playing both an undercover cop and a NBA star in two hilarious comedy shows has been a fantastic opportunity for Keith Powers.  It has allowed him to show that he can play a romantic guy with a secret and an awkward superstar athlete.

In an exclusive interview, Keith Powers talked about playing LaDarius Pope and what he loves best about the role and what new viewers can expect when watching SIN CITY SAINTS.

Your new show SIN CITY SAINTS is pretty outrageous.
KEITH:  Definitely!  And it gets crazier too.

What drew you to the role of LaDarius Pope?
KEITH:  What attracted me to the character was he was a NBA star, but his real attitude is he is very naive and very emotional and he’s bratty.  He’s not what you would expect from that new boutique, superstar athlete.  That attracted me because there are a lot of athletes out there that grew up knowing only their sport.  So who they really are as a person may surprise you, and that is what I love about LaDarius: he surprises you.

It makes for some good comedy because he naiveness is such a wide-eyed innocence and that is just unusual.  It is definitely not what you are expecting.  Do you think he is too naive?
KEITH:  Exactly.  And sometimes I do think he is, but honestly there are people really out there who are like that and you would not know because what they do career-wise is like a mask. It’s like a hood up in front of them.  It’s funny how many celebrities I have met and I have looked up to and when I meet them, they are nothing like what I thought and it’s like, “Whoa.”  So I think LaDarius is a little bit too innocent, but it is perfect because it makes for amazing comedy.

What do you most admire about LaDarius?  What do you think is the coolest thing about him?
KEITH:  The fact that he is a NBA star.  Who wouldn’t love to be a pro athlete making x-amount of millions of dollars in endorsements?  It’s like being a rock star.  So I get to play a NBA star and yet he is so innocent, so it touches all bases.

Did you have to brush up your basketball skills at all for the role?
KEITH:  A little bit.  As you saw, early in the season, LaDarius was injured.  So it’s rare we see him playing.  I actually grew up wanting to be a football player, so it’s funny that I’m portraying a basketball player.  But I can go out there and look like I know what I’m doing.  That’s my job.

When you first read the script where LaDarius hooks up with Mrs. Wu (Rosalind Chou), were you like, “What?! He does what?!”
KEITH:  Yeah, I was like, “Hold on!”  I didn’t even know about the cougar part ’til I got to set.  Then I was just laughing.  I knew it was going to be crazy.

Will we get a chance to see LaDarius’ mom Bernice (Jean Louisa Kelly) meet Mrs. Wu this season?
KEITH:  Yeah, you’ll see that and it’s not as bad as you would think.  It’s funny.  It’s hilarious.

If you had a chance to sit down with LaDarius, what kind of advice would you offer him about life?
KEITH:  That, first, it isn’t fair; two, you have to have a backbone.  Also, everybody isn’t always there for your best interest.  You really have to surround yourself with good people and not be easily influenced.  That is what I definitely would tell LaDarius.  That would keep him right.

What do you think you have learned from playing LaDarius on SIN CITY SAINTS versus your role of Theo/Anthony on FAKING IT?
KEITH:  I’ve learned that LaDarius is very sensitive and innocent, and I’ve learned it is fun playing that.  Even as I’m saying his lines, I’m laughing in my head.  I am so much more like Theo than LaDarius.  It is also fun to play him, but LaDarius is more a stretch for me.

You’ve had two choice roles where one is an undercover cop and the other is a NBA star.  Those are not bad roles!
KEITH:  I know. I’ve been lucky.

To see what further trouble LaDarius finds himself in and what trouble Jake gets the franchise into, be sure to check out SIN CITY SAINTS.  All eight episodes are currently available for viewing on Yahoo Screen. (LINK)