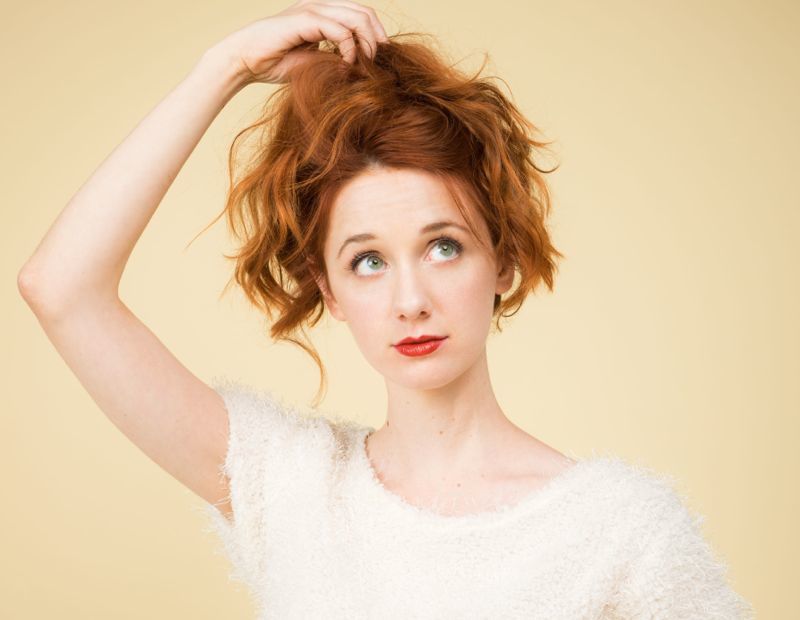 Proving that all good things come in twos, actress Laura Spencer has been blessed with two hot televisions roles that air on Thursday nights right now:  she plays Jessica on the Fox series BONES and Emily on the CBS series THE BIG BANG THEORY, and having previously portrayed Jane Bennet in the internet phenomenon, the LIZZIE BENNET DIARIES, Laura’s career feels a bit rosy and charmed right now.

In an exclusive interview, Laura talked about her remarkable good fortune in the television projects she is working on for THE BIG BANG THEORY and BONES, and some of the lessons she learned working on LIZZIE BENNET DIARIES.

What can you share about your role as Emily upcoming on THE BIG BANG THEORY?
LAURA:  I’m very excited. One of my scenes reveals that Emily has a little bit of a dark side.  We’ve seen a little of that before and this is just a hint that there might be something a little dark about her.  So that’s a lot of fun.

Do you know how long your story arc is going to be on the show?
LAURA:  This is my second appearance this season and I was in five episodes last season introducing the relationship with Emily and Raj (Kunal Nayyar).  We’re just getting to know Emily a lot more since Raj and Emily seem to be pretty serious at this point.

Are Raj and Emily your favorite couple on the show right now?  Are you rooting for them?
LAURA:  (Laughs) I’m a little biased.  So, yeah.  But if I had to pick another couple, I’d probably pick Howard (Simon Helberg) and Bernadette (Melissa Rauch).  I may be a bit biased there too because I’ve gotten to do scenes as double-dates with that couple, so get to see their back-and-forth banter and dynamic up close and personal. So I guess I have an attachment to that.  I think Simon and Melissa are really lovely people.  Everyone on the show is lovely.  It is just really fun to see two pros go at it.

So why do you think we should be rooting for Raj and Emily?
LAURA:  The reason I’m rooting for Raj and Emily is that I think Emily gets Raj, and I think she celebrates his quirkiness and loves his nerdiness.  She doesn’t ever criticize him and she just seems to be very open with whatever he is in to.  And it seems like he does the same with her.  She clearly has these weird dark interests and he is not really phased by it.  That’s why I’m rooting for them.  I think that is the basis of a good relationship.  I think it’s even more than that — I think they enjoy each other’s quirks.  I really love seeing that on the show.

In spite of the little bit of darkness that might be lurking in her soul.
LAURA:  (Laughs) Exactly!  Let’s hope she’s not secretly really awful.  But so far, it just seems like really fun things that make you question, “Wait a minute. Did she just say that?”  So I think it is pretty fun.

For you, what has been the biggest surprise working on the show?
LAURA:  The biggest surprise has just been getting the role and how it has grown.  When I auditioned for it, I only knew that I would be on for one episode.  So now that I’m going to be in my 8th episode coming up, it’s turned into such an amazing experience.  It was cool to work on the show once, and then to get to come back and to learn more about more character and to work with everyone on the cast by now has just been a dream come true.  Probably my favorite part of the show is doing scenes before a live audience and getting to see how intensely devoted the fans are to the show.  They are so loving and supportive through the whole taping.  That’s just been a real joy to see and experience. The fans have been really lovely to me at the tapings, like cheering when I come on.  I feel like I’m part of the family already and that has been a really pleasant surprise.

Who is the hardest to do a scene with because you just want to crack up during the scene?
LAURA:  They are all really funny and funny in different ways.  I would have to say that Simon’s  humor gets me every single time.  And then with Kunal, that gets me too.  But they are all funny in their own way.  We’ve all had our moments when we break and those will undoubtably be in the blooper reel.

What is upcoming on the show in general that the fans should look forward to?
LAURA:  For tonight, we’re learning more information about Emily’s character and all the relationships on the show are continuing to progress, which I think is really cool element that is being brought into the show each season.  There is a lot of great moments in this episode among the couples with the prom scene, so it’s a real special one.

It seems like the couples are pretty functional, which is a surprise when you look at where the show originated from.  Do you seem them as healthy relationships?
LAURA:  I think they represent a bunch of different types of relationships out there and I think that is also what is really cool about the show — that you have people that are polar opposites coming together, you have people that relate to one another because they have similar backgrounds and have similar interests.  You have couples that make each other laugh or need each other because the other has a certain strength.  I think that is what is so unique about it, that it is a comedy and we are getting accustomed to what a relationship is like for each of us, no matter what kind of one we are in.

What do you most admire about Emily?  Is there something in her that sticks out for you?
LAURA:  I feel very fortunate to be playing a strong, independent, smart woman on a TV show.  I think it is really cool that she speaks her mind, that she’s opinionated, that she has a sense of humor. Those are all admirable qualities that I try to bring to my daily life, so it is so fun to get to play a character like that and to have a strong presence in that way for women.

Did you have an inkling back when you were working on LIZZIE BENNET DIARIES that you would eventually end up working on one of the biggest shows on television?
LAURA:  (Laughs) How could I have possibly known that?!  It was such a cool surprise.  Everything about LIZZIE BENNET DIARIES was a pleasant surprise as well.  When we were making that, none of us knew what the future of that show.  Flash forward to now, I certainly didn’t know what the future held for me after the show.  I just continued on in my auditioning and growing in my work and seeing what happened the new day. It’s just such a testament to what a new day holds.  It was really cool experience with LIZZIE BENNET DIARIES to work with a cast so consistently and make friends with them, and it is starting to feel like that on BIG BANG THEORY as well because I’m getting to spend so much time around them and they have really welcomed me into their family.  I think that is the mark of a good show.  I think when everyone gets along that way, things run so smoothly.  It’s just been nothing but good things working on the show.

What would you say you learned from working on LIZZIE BENNET DIARIES?
LAURA:  You know what? I’ll give you a really honest answer on this.  I was not on social media at all before LIZZIE BENNET DIARIES, and because that show was such an interactive experience, the creator of that show encouraged us all to be active online and have a presence there as the actors as well because the fans were so engaged.  That was my introduction to fandom.  I had never really known what that was.  I have been a fan of shows, like I’m a fan of Harry Potter, but I didn’t know that there was a huge fandom with conventions specifically dedicated to the fans.  So I feel like I’m way more accustomed to the lingo of fan girls and fan boys, and that helps me going into BIG BANG THEORY, which an even bigger fandom.  So knowing that world and knowing where fans come from and that excited energy is fueling the show and its success, in the same way that LIZZIE BENNET DIARIES did,  just on a larger scale.

You’ve had a little bit of a charmed experience since no one thought that LIZZIE BENNET DIARIES would blow up and become such a big hit like it was on the internet, and then you landed on one of the biggest shows on television.  So you’ve hit upon some really unique projects that have done well.  That has to be pretty exciting.
LAURA:  It is really exciting.  I’m thankful every day for it.  It’s just one of those things that has been a pleasant experience in how working hard and sticking with it can lead to really great opportunities.  You just never know which one will hit.  So you just have to keep moving forward, whatever way it is.  That’s how I’ve looked at it.  What is great about looking back at it is that I’m just pleasantly surprised.  That’s what has been so thrilling.

Is there anything else that you are working on that’s upcoming that you can talk about?
LAURA:  I have been kept busy with BONES and BIG BANG THEORY, and doing both at the same time.  I have multiple episodes of each coming up this season, so I’m enjoying my time as a working actor on two hot shows and then looking forward to pilot season and if anything comes of that.  It’s a really thrilling time getting scripts and reading them and wondering what the next day holds, and feeling lucky that I’m employed and working on such great television shows.  It is great times.  (Laughs)

Do you feel like you’re loyalties are split a little bit on Thursday nights with both BONES and THE BIG BANG THEORY airing against each other?
LAURA:  That is funny ’cause this is the first night I’ve realized, “Oh my gosh. This is happening.  They are duking it out.”  BIG BANG THEORY had been on Mondays, so that wasn’t an issue before, and now now people are asking me who I’m rooting for — of course I’m rooting for both!