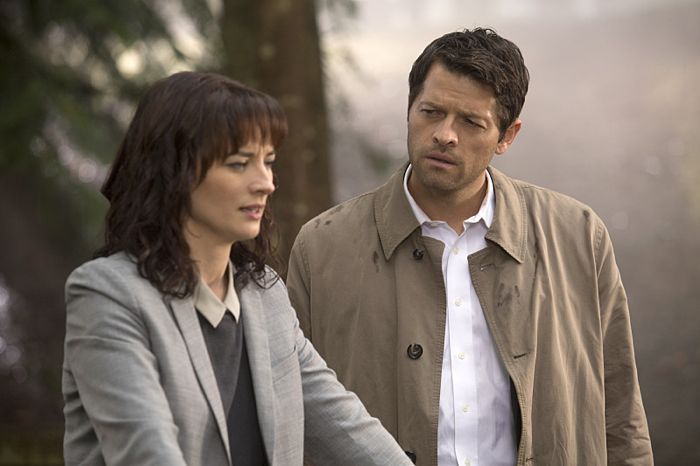 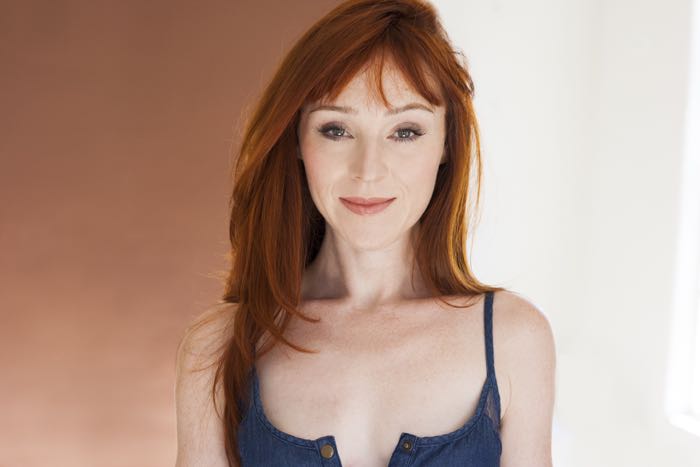 While new to American audiences, Ruth Connell is about to cast a spell a whole new fan base as she makes her big debut on SUPERNATURAL this season.  Briefly introduced in the episode “Soul Survivor,” Ruth returns in the upcoming November 25th episode entitled, “Girls, Girls, Girls.”  So look for her to stir up some trouble for the Winchester boys while turning few heads and perhaps turn up the heat in more ways than one.

In an exclusive interview, Ruth talked about how much fun it is working on the long-running adventure series that explores the dark side of Heaven and Hell.

What can you share about your particularly bewitching character on SUPERNATURAL?
RUTH:  I play Rowena and I can definitely tell you that she is a witch, and I don’t know what else I can say.  There is such a sense of mystery about the show and I am under such strong warnings about spoilers!  I will say that Tuesday’s episode has a great surprise in it and you may be seeing more of me after that. So that is about as much as I can say.

So what drew you to the role?  What interested you in it?
RUTH:  My friend actually emailed me the breakdown of the character and it had everything I was looking for in a role.  It just sounded incredible.  Rowena is feisty and she’s definitely nobody’s doormat.  She is a woman who knows what she wants.  I wish I had some her balls!

For you, what has been so far the most fun working on the show?
RUTH:  (Laughs) Honestly, everything about this job has just been a dream — from the casting process to appearing in scenes and that includes the gentleman that picks you up at the airport in Vancouver to the guy in craft services, Mike Campbell who is also of Scottish descent.  Everything about the job has just been so wonderful.  People talk about the SPN family and it really does feel like I’ve landed in something just wonderful.  It’s my first American TV show and I am completely aware of how lucky I am to have landed in the SPN family.  It is everything people would think it would be.  It’s just wonderful.

SUPERNATURAL is also known to be a boys’ club and they like to have a little fun and they pull pranks on each other.  Are they pulling you into the prank world yet?
RUTH:  I think they have been quite gentle with me so far.  I have seen Jared, Jensen, Mark and Misha on set and they just bring such amazing energy.  It is incredible to think they all have been doing [the show] and how fresh they are and how much fun energy they do bring.  They bring such a sense of enjoyment and naughtiness, I think.  (Laughs)  And they’ve got a twinkle in their eye.  It’s great fun.

What was it like working on your first episode of the show?
RUTH:  For my first episode, Jensen directed it and he is just the loveliest man. He is so kind and so patient.  It was an amazing first experience working on SUPERNATURAL and it was great to be directed by him.  I had been watching as many episodes of SUPERNATURAL that I possibly could, and then when I got there, he is so boyish and so young in real life.  I was like, “Oh my goodness!  How am I supposed to do this show with him?!”  He is so youthful and looks so young!

They all clearly have so much fun on the show and that probably helps keep their youthfulness alive in them a bit.
RUTH: Yeah.  They are all great friends in real life.  Though I have to say, it comes from higher up than that.  Everyone I’ve met on the show has a real sense of enjoyment.  I was also lucky enough to be invited to the 200th episode party that they had in Vancouver and that was amazing.  I ended up dancing barefoot with Felicia Day.  I keep pinching myself.  I am so lucky to be in the show and to have the warm reception that I had from everyone.  It is amazing.

Working on a show like SUPERNATURAL, they have really outrageous characters and stories.  Does that kind of throw you for a loop or do you just kind of roll with it?
RUTH:  The second script I got, I was working with Bob Singer on set and I was like, “I can’t believe what I’ve got to say in the next episode!”  I felt like I had a good idea of what was the character, then they surprised me.  I have something quite outrageous to say in the episode coming up.  I was thrilled.  I’ve done a lot of theater and the more extreme the character, the better.  That’s where I’m most comfortable.  And I was shocked.  I can’t wait to see how the fans react to a couple of things that are said and done by my character.

Sounds like it is a dream come true for you to play a character that is so completely different than who you are.
RUTH:  Yeah, definitely.  Last year, I did a play in L.A.  with Noah Wyle and Daniel Henning.  I ended up playing Mrs. Darling and Captain Hook.  Captain Hook is the most outrageous character that there is and to be a woman playing that, it was another amazing experience.  I think playing that kind of role definitely prepared me for Rowena and the flavor and essence of SUPERNATURAL.  It is larger than life and epic and fun all at the same time.

Gosh, do you ever get worried when you get cast in this characters, “What do they see in me that is not really there?”
RUTH:  (Laughs) Yes!  What are they seeing?  Is it a diabolicalness? But I definitely think I have caches of fun that I bring and I think it is interesting to go to really dark places. So I think that suits SUPERNATURAL really well.  There is plenty of serious stuff, but they always keep their tongue in their cheek.  That really appeals to me.  Even the style of the show, I thought to myself, “This is so up my alley.”

So you hope to be playing Rowena for some time to come.  Sounds like a fun role for you.
RUTH:  I would happily go on and on and on if they would have me.  As an actor, I look to people like Tommy Flanagan — who is another Scottish actor  — and that’s kind of why I got into the business and what I dream to do in that style of movie and roles — to do something completely opposite, a real contrast.

If you could sit down with Rowena, what would you like to tell her?  What kind of advice would you give her?
RUTH:  You know what?  I think she’s pretty sorted.  I wish I had some of her confidence and her balls.  There is a saying in Scotland, “keep the heid.”  It’s like, “keep your head screwed on.”  That might be my one piece of advice to Rowena.

How would you generally describe what is coming up for Rowena on the show?
RUTH:  I would say quite a bit of surprise.  It was a surprise to me.  There’s definitely scope for Rowena to impact more than one of the main characters. Her actions definitely have a long range effect.

Is it even possible to think that she may have a romantic interest, or is that the farthest thing from her mind?
RUTH:  (Laughs) I’ve read some of the fan stuff.  The fans are amazingly perceptive, like the clips for the episode where I was introduced — all the stuff about the entity inside me and there was an orange rose in the vase — and I was like, “Wow!”  I had been so busy concentrating on not knocking my glass of whiskey over.  So they noticed more than I did and I was on the set!  So, you know, Rowena is a woman. She could be open. So she might be open to some male admiration.

Is SUPERNATURAL the only thing you are working on at the moment or is there something else you’re working on?
RUTH:  I just shot a DOGMA-style movie a couple of weeks ago, called “Hara-Kiri” with a friend of mine, Henry Alberto, who was in a play I did last year.  That is opposite in the spectrum.  No make-up, no lighting.  It’s got a serious subject matter.  It’s interesting because I discovered a bottle of vodka on set and you can use what the character would use and by the forth take the vodka was influencing my acting.  So that was a learning curve.  (Laughs)  And I did another film at the beginning of the year called “The Cursed Man,” from an occult novel and that is in post right now.  I also do quite a bit of voice-over work as well.  I can voice-match and I’m not allowed to say what individual characters I do, but there’s one character that is so full of life and she’s great fun to do.  That was my first really cool job in America.  It’s fun to be in America and be able to use my own voice, which is an unexpected treat.  It is so great that it happening more and more.

Sounds like you’ve had a busy year and hopefully we will see more of you this next year too.
RUTH:  Yeah, I’ve been working hard for a long time in the business and I’ve nearly been there to break-out a few times.  Like I was cast as a series regular in London before I came here and then the show didn’t go.  So I came here and I knew one person in L.A. and I’ve kind of done it from scratch.  So it hasn’t been too fast.  It’s been a couple years.  But I’ve been working hard.  I’ve actually  been on stage since I was 4 years old.  So now everything seems to be rolling out and I’m so ready for it — and so grateful for it and relishing it because I know the other side of it.  I know what is is like to be nearly there and it is not quite happening.  So to be in a show like SUPERNATURAL, with such an amazing following around the world, it is everything I could have hoped for.  I’m also going to my first SUPERNATURAL convention and so I’m going to meet the fans face-to-face next year.  I’m excited about that.  It will be fun.

To see just who Rowena may be tempting and torturing this week, be sure to tune for an all new episode of SUPERNATURAL on Tuesday, November 25th at 9:00 p.m. on the CW.