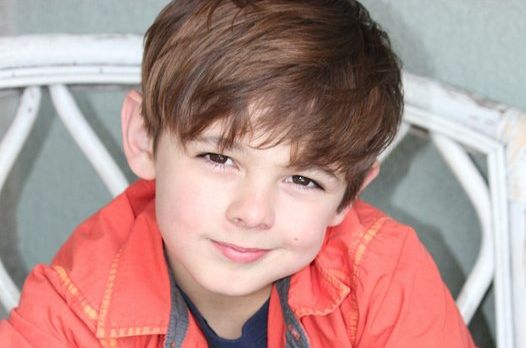 Some people get to wish upon a star and their dreams come true, and surely that has already happened for young actor Max Charles, whose long acting resume includes the new Hallmark holiday film NORTHPOLE and the soon to be released Clint Eastwood film AMERICAN SNIPER, as well as appearances in the AMAZING SPIDERMAN films and the television series THE NEIGHBORS and CONSTANTINE.  It is quite an impressive acting resume for such a young actor.

In an exclusive interview Max talked a bit about his upcoming role in the Hallmark film NORTHPOLE co-starring Bailee Madison and talk briefly about his guest-starring role in the new television series CONSTANTINE.

What is your film the NORTHPOLE about and which character do you play?
MAX:  I play Kevin, and he and his mom move into a new town.  Kevin and his mom really like Christmas, but in their new town, everyone is too busy for Christmas.  So Kevin and his new friend Clementine, who is an elf portrayed by Bailee Madison, have to save the North Pole and his town.

Is this a comedy type of holiday film, or is it real dramatic?
MAX:  I think it is a little bit of both.

So who is Kevin? What is he like as a character?
MAX:  He is a kid that really likes Christmas.  In his old town, it was a big thing — they always had the Christmas tree lights and all the big ceremonies and stuff, but in their new town, they do none of that stuff. So he wants to save Christmas for his new town.

Sounds like Kevin is playing the big Christmas savior along with Bailee Madison’s character Clementine.  Is that right?
MAX:  Yeah, that’s right.  That’s what they are trying to do.

What did you like about playing Kevin in the movie?
MAX:  It was actually a lot of fun because we got to go up to Canada to Montreal and it was 18 degrees below zero there.  It was like blizzards every day.  I was also really fun working with that cast because we would have snowball fights and go outside and make snow angels and stuff like that.  It was really fun.

Had you been to Montreal before?
MAX:  No, it was my first time there.  It was fun to see it.

Beside all the snowball fights and snow angels in the snow, what else was fun while working on the movie?
MAX:  It was fun because everyone was really nice.  Like we were having a blizzard in one of the scenes and they had five cameramen standing around everybody.  They were just really cool and really nice.  I also got to ice-skate which is something I learned to do for another show  did.

How was it working with Bailee Madison?  Was it fun?
MAX:  Yeah, she was really nice.  We would always have dinners together, my family and with her mom.  We had great snowball fights and lots of fun making the snow angels.

What was Kevin’s relationship like with his mom, played by Tiffani Thiessen, in NORTHPOLE?
MAX:  Both of them really like Christmas and his mom is a reporter, and she knows what is going on in the town and how none of them like Christmas.  As for Kevin and his mom, they have a good relationship but Christmas just isn’t the same as it was in their old town.

So is it their goal to bring back the spirit of Christmas?
MAX:  Yeah.  They want to do that.

Is there one scene that stood out for you as a favorite to work on?
MAX:  There’s a lot of great scenes, but I liked when we got to throw snowballs.  It was in the middle of a golf course and the snow was up to our knees. Our legs would sink in each time we took a step. It was also really fun because we actually got to have a snowball fight.  And it was real snow.

Burrrr, that sounds cold.  How did you stay warm during all that filming?
MAX:  There were heaters on and we wore a lot of layers.  Like I had two long-sleeve shirts on and then a big winter jacket.

You also were in the new TV series CONSTANTINE.  What was that experience like?
MAX:  It was really fun.  It was cool doing it.  We worked on that in Atlanta, which was my second time in Atlanta as I filmed THE THREE STOOGES there.  It was a cool place to be and everyone on the show was really nice.  It was really different than working on NORTHPOLE.

CONSTANTINE is a spooky show.  Did you get to do some of those scenes?
MAX:  Oh yeah!

Did you like working on the spookier scenes?
MAX:  I was pretty cool with it.  It’s really fun for me.  But I think everyone who is watching it from home will be scared.  It’s creepy if you’re just watching it.

What kind of character did you get to play in CONSTANTINE?
MAX:  I got to play Henry, and he’s just a normal kid that gets taken over by a spirit, and John Constantine (played by Matt Ryan) tries to get the spirit out of him.

So what else are you working on right now?
MAX:  I just did a movie with Clint Eastwood that is called AMERICAN SNIPER.  Clint Eastwood  was directing and Bradley Cooper portrayed my character’s dad.  Clint was a really nice director.

You seem to be really busy with both television and film.  Do you have a preference of one over the other?
MAX:  I like switching it up.  I like doing voice over, television and movies.  They are all really fun.  I also just did a musical, called “Bunny, the Elf.”  It’s going to be aired on television on NBC.

Finally, what kind of advice would you give to other actors who may be your age who are looking to break in to the business?
MAX:  I think they should follow their dreams and do what they want to do.

To see Max as his character works to save Christmas, be sure to tune in on Saturday night for the premiere of the holiday film NORTHPOLE, November 15th at 8:00 p.m. on the Hallmark Channel.