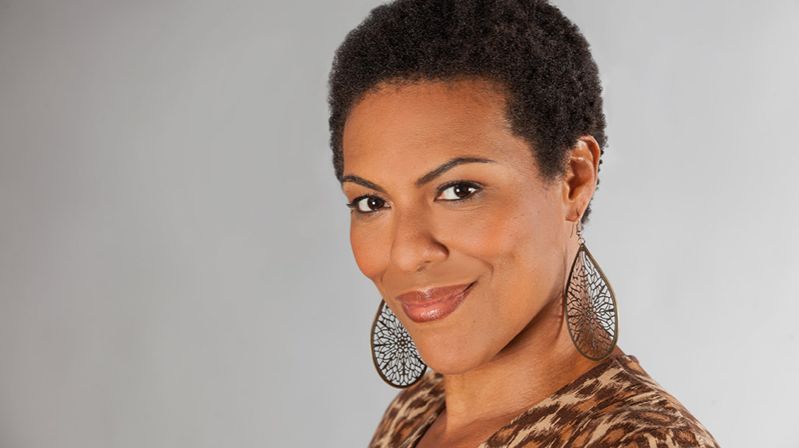 Being a single mother with four children is not an easy job, but in the television series IF LOVING YOU IS WRONG, April Parker Jones’ character Natalie shows that every single moment she gives to her children is rewarded.  For where would the world be without mothers willing to work hard and to give so much love and strength to their families? It takes an equally strong actress to convey that strength of conviction, determination and undying love — to bring such a character to life on screen and to make us all cheer for her each step of the way.

In an exclusive interview, star April Parker Jones talked about the complexities of Natalie’s relationships and where she draws that remarkable strength.  She also shared how much she appreciates getting the chance of a lifetime to portray Natalie on IF LOVING YOU IS WRONG.

What initially drew you to IF LOVING YOU IS WRONG and the role of Natalie?
APRIL:  My manager told me about the show and the character I immediately connected with was Natalie.  That was my first choice.  So my manager submitted me for the role of Natalie and I went in to audition, and a couple weeks later I got a call back and this time Tyler Perry was in the room.  Funny story:  after my second audition with Mr. Perry, he said, “April, when you walked in the room, I knew right away that you did not look like the character, but your audition blew me away.”  He said, as a writer and a director, he envisions these characters and I did not look like her, but the audition went really well.  Then a couple weeks later, they called me and told me that I did not get the role; that I was too old for the role, but that they had another role in mind for me.  So I read for this other role that they had in mind for me, but they also had me read for Natalie again.  It was at that point that Tyler Perry said, “You know what? April, you are Natalie. You are her.”  So there were some initial uncertainty, but it all came together for the Natalie role.  I was really excited to play Natalie and bring life to her.  She is such a relatable character in so many ways and I am having so much fun playing her.

What do you most admire about Natalie?
APRIL:  I really like that Natalie is she is such a woman of strength and pride.  She’s always had to be the protector for herself and for her kids, and like so many women, she’s had to play so many roles: mother, father, provider.  I love that strength in her.  There’s an episode where Natalie talks to one of the parole officers about her son Joey, who is just getting out of jail, and she gives a little exposition on about who she is and that she is not a stereotype.  She goes on to say, “I may look like a stereotype having four kids by three different men and being in the lower income bracket, but I’m not.  I have never been on welfare a day in my life. I have always taught my kids to do right and to take care of themselves and to follow the right road.”  I love that about Natalie.  That she is very strong and very prideful.  I am starting to believe that those qualities make up so many women, and yet you do not see a lot of women on TV like Natalie.  I think a lot of Christian women see themselves in Natalie. I love that about her.  It will be interesting to see where the production takes Natalie’s character. As of right now, I think she is also a voice of reason. She’s the voice of truth and honesty.  I love that about her as well.

Where do you think she draws her strength from?  She is so incredibly strong.
APRIL:  Necessity.  We, as women, are the mothers of the Earth. We have to find a way to make sure things happen, and we do.  We are the most resilient creatures on the face of the Earth.  So I think Natalie draws her strength out of pure necessity and the love she has for her family — for her children — so they have more than she has as they get older and to remember what is important in life:  being kind, doing the right thing.  So she draws her strength out of necessity and out of the love she has for her children.

Natalie’s relationship with her son Joey (Matt Cook) is obviously very complicated.  Does she really believe in him or does she worry that he will never live up to her expectations?
APRIL:  I believe she is a little bit of both.  I really believe that Natalie believes in her son. She’s always believed in her son.  I think she had kind of given up, to an extent, for him to live up to her expectations.  But she will never ever lose the belief that she has in him.  She believes in all of her children.  She will always believe in her son.  But I think she may be a set up for disappointment if she tries to have this belief that he will live up to her expectations. But she certainly never, under any circumstances and no matter what happens, will she stop believing in her son — or any of her children, for that matter.

In the upcoming episodes, it seems like Natalie is at a crossroads with her son.  She is trying to believe in him, but at the same time, she is starting to doubt him.  So are we going to see her work through that doubt?
APRIL:  Oh yes.  You’re really going to see in upcoming episodes that she starts to work through the doubt.  You see her start to let her guard down with Joey, to let him prove himself.  You’re going to see lots of emotion out of Natalie that conjures up how strongly she believes in him.  We will also see, because of Joey, that she starts to let that wall down.  It’s going to be really interesting.  We are going to see another side of her that we haven’t seen up until this point because Joey is back.

The other complicated relationship in Natalie’s life is her relationship with Lushion (Charles Whitfield).  Do you think that is a healthy relationship in her life or is Lushion someone she should cut ties with?
APRIL:  Natalie has been so scarred in the past that sometimes what she thinks is unhealthy is really healthy, and then vice versa. As far as the relationship with Lushion, I believe that Natalie knows that Lushion is a good man and he brings a sense of safety and security to the family, that he is a good example for the children.  It is just because of her past experiences, like so many women, that she does not allow herself to receive the love that Lushion is trying to give to her.  But as the episodes start to unfold, you will also see that dynamic with Lushion — she starts to allow him in.  You’ll get to see that different side of Natalie, a somewhat softer side, in her dealings with Lushion.  All in all, I do believe that Natalie believes that Lushion is a good guy and that relationship is a healthy one.

What is it like working with Charles [Whitfield]?
APRIL:  (Laughs)  Oh gosh, it’s not work at all.  It is pure joy to be able to work with such an experienced actor.  Every take is different.  We allow each other that freedom to kind of live in that moment and where every word took us in that moment.  We allowed ourselves to do that, even if we went slightly off script.  It’s like dancing with somebody who is such a good fit and you don’t step on each other’s toes.  It’s just a great fit in that regard.  We allow each other that freedom to be who each other are in that moment.  It’s an absolute joy.  I can’t wait to work with him again. I wouldn’t even call it work. It’s a joy, a dream come true.

What has been the biggest surprise working on IF LOVING YOU IS WRONG?
APRIL:  The biggest surprise has been working with Tyler Perry as a director.  Like I said before, when he writes the characters, he has an imagine in his head and how he wants these characters to look, and how I didn’t look like the image he had in his mind for Natalie.  Well, the biggest surprise for me was, like him, I already had this preconceived idea of how it would be to work with him and it wasn’t like that.  He is so down-to-earth and humble and laid-back and funny at times. There were times when he would prank people on the set, which was a surprise and funny.  It showed the human side of him.  That was one of the greatest experiences — working under his direction and the freedom that he allows myself and all the other actors to kind of give life to these characters.  That was the most surprising:  that he was also cool and down-to-earth.  It made doing the work so much easier and so much fun.

What can you tease about the last few episodes of this first season of IF LOVING YOU IS WRONG?
APRIL:  All I can say is there will be so many fun surprises and twists and turns.  You are just going to have to tune in.  There is just no way I can even give a hint as to what is going to happen without kind of letting the cat out of the bag.  Just know:  you will be on the edge of your seat, you’re heart is going to beat faster, and you might even start sweating.  It is going to only get juicier and steamier.  I can’t wait for everybody to see what is coming.  I’m so excited.  I just know that that audience will not be disappointed.

Finally, is there anything else you would like to promote or talk about?
APRIL:  Right now, I just came back from my class reunion in Durham, North Carolina. That’s where I am from.  It was so awesome because I got a chance to go back to my old high school where my old drama teacher is still working there and I got to mentor the teens there for about 2 hours.  It was a life-changing experience for me — to be back in my home town to share my experiences so far in the industry. It was priceless.  I am riding high on that love and inspiration from while I was there.  I am so grateful to my home town.  They have given me so much love and support.  I am so full.  I feel like I am about to burst with it.   And the Tyler Perry fanbase is such a loyal fanbase.  To be there and to touch so many people who are just diehard fans of the show.  To be able to hug them and let them know that dreams can come true and not to give up.  That was amazing.  Then as we are prayerfully anticipating another season of the show, I encourage everyone to keep watching the show.  We are so thankful for the support.

To see what fun twists and turns and surprises are in store for Natalie in IF LOVING YOU IS WRONG, be sure to tune in for the final two episodes of Season 1 on Tuesday, October 21st and 28th at 6:00 p.m./9:00 p.m. on OWN.