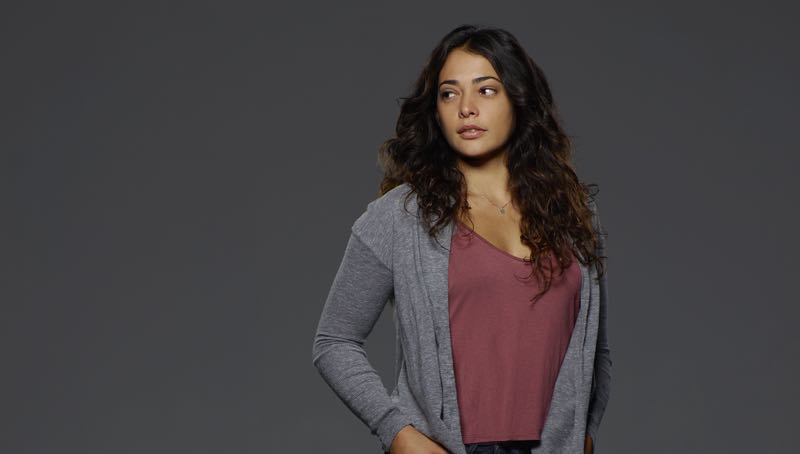 Just who killed Tom Murphy is the question hovering over ABC’s drama series Secrets And Lies .  After all, he was just a young boy and yet someone snatched him from his home, killed him and dumped his body where he was sure to be found by next door neighbor Ben Crawford (Ryan Phillippe).  In the episodes that have aired to date, the mystery is no closer to being solved than it was when Tom’s body was first discovered.  But what viewers have learned is that someone may have murdered Tom in order to implicate Ben.  Just who hates Ben Crawford that much?  And just who would be so diabolical to kill an adorable child in order to punished or hurt Ben, is even more terrifying to consider.

Yet Ben is the not the only hurt by Tom’s death — Tom’s mother Jess Murphy (Natalie Martinez) has also been traumatized.  Her son was taken from her in the most heinous manner and left to implicate the man who was Tom’s biological father, bringing Jess and Ben’s one night affair to light.

In an exclusive interview, star Natalie Martinez talked about what Jess is feeling and going through and teased where the twisty murder-mystery is going next as the show rushes towards its finale in the next three episodes.

In the last episode, we saw that Jess had gone to commiserate with Ben after she thought he had been thrown out of the house by Christy (KaDee Strickland).  Where is Jess’ head and her heart right now?  Is she just looking for someone to share her grief with or is she looking for love?

NATALIE:  I think at this point after all she has gone through Jess is looking for someone.  I mean, she doesn’t have anybody.  So I don’t necessarily think her intentions are bad or ill-willed towards the Crawfords.  Jess is definitely at a point where she is vulnerable.  She just doesn’t have anybody and she is going through this major thing in life, losing her son.

Did she actually think Christy had thrown out Ben or was Jess just hopeful that was the situation?

NATALIE:  I think it was just something that happened.  I don’t think she wanted Ben to leave the house or Christy.  She’s not trying to break them up.  But if they are not together, then she’s thinking, “why not hang out?”

One would think that Jess wouldn’t want to hang out with Ben as it would just be too painful, like a reminder of their son Tom who just died.

NATALIE:  At a time like that you kind of want people around you that remind you of the person you lost as it keeps them alive a bit.  It also depends on the person.  Someone people want to be alone and escape from the whole situation, and for others like Jess who doesn’t really have anybody — with what is going on with her sister and her husband — so I think Ben for her is like a crutch, someone she can talk to and someone she feels a connection with since he was close to Tom too.

As an actress, was it exhausting to work through the entire series in such a heightened emotional state with Jess’ constant grief?

NATALIE:  Yes, it was a bit challenging at points.  Barbie Kligman is such an amazing writer and just an amazing person to have around if I had a question about a scene or needed anything character-wise. We also had really good team of directors and stuff to help guide me throughout the season.  But it was definitely challenging to cry and be in that state.  What I liked about the show was that it was not necessarily constantly dramatic — like the scenes about their past in the flashbacks, or the scenes as they tried to figure out who killed Tom.  It was layered so we had breathing room, and it wasn’t so dark all the time.  But it definitely was a difficult role to play due to the intensity of the emotions.

I kept expecting Jess to have a murder board of her own listing out the suspects, but she seems content to let the police figure it out.  What is up with that, does Jess just not want to figure out who killed her son?

Does Jess subscribe to Ben’s belief that there is something off about Detective Cornell (Juliette Lewis) and that she might be out to just get him?

NATALIE:  I think we all have that suspicion towards Cornell. In these next episodes, we are going to start retracing the steps back as to what happened.  We are going to start figuring a lot of things out — about Cornell, about Ben, about Jess, about what happened that night.  Cornell is just doing her job.  There is a lot of signs that point to Ben and she just wants to get to the bottom of it.  But the question is:  how far are you going to go to catch the killer?

If you could give some advice to Jess, what would you tell her?

NATALIE:  “Just be strong.”  I see her searching to be with someone and searching to lean on someone and to have someone.  But she needs to find her inner strength and be strong.    And my advice is:  “Just hold on.  We’re almost there.  We’re going to find out who the person is that is responsible.”

As we countdown to the finale, who would you say we should keep an eye on? Who should we keep up on our murder boards of suspects?

NATALIE:  [Laughs]  I don’t know.  This is the kind of show where it could be anyone.  It is such a flip of a coin at this point.  So I’d say keep you eyes on everyone.  Everyone has a secret and lie.  You’ll be surprised.

Thinking back about working on the show, what for you was fun to do?

NATALIE:  I had a great time with the cast.  They were really great and we had a really fun time just being on the show.  Even though it was a hard role to play, we really had a great time.  We all got along really well.  I miss being on set with everyone

NATALIE:  In the next episodes, we are going to start finally figure out what the hell went on that night and what’s going on, and we’ll have a better idea of who killed Tom.  So stayed tuned, all your questions are going to be answered!

To see each piece of the puzzle continue to fall into place and finally unmask Tom’s killer, be sure to tune in for the last three episodes of Secrets And Lies on April 12, 19 and 26th at 9:00 pm on ABC.