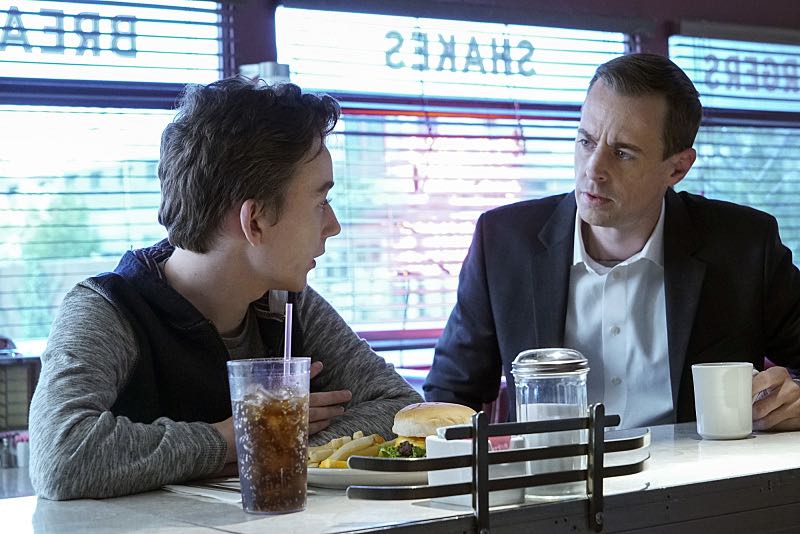 Tomorrow night’s NCIS serves as Michael Weatherly’s final episode as a series regular. There is much speculation over how his character, Very Special Agent Anthony DiNozzo, will make his grand exit. There’s a possibility it might have something to do with his former teammate, Ziva David. At the end of last week’s “Dead Letter,” it appeared Ziva’s life might be in jeopardy after an explosion rocked her safe house in Israel.

However producers choose to write out one of the show’s four original characters, it’s clear Weatherly’s departure is going to be emotional. After all, he’s played Tony for 13 seasons (plus two J.A.G. episodes). Seat42F recently talked to Sean Murray about having to say goodbye to his longtime co-star. Although, the way he tells it, the actor who plays Special Agent Timothy McGee, doesn’t consider this a goodbye at all.

“I love Michael to death. I love Michael and we’ve had so much fun over the years — on and off screen,” he said fondly. “For me, well, I’m not saying bye to him. Michael is my best friend. He lives about 20 minutes away from me. Our wives know each other and we get together all the time.”

He doesn’t see this as a definitive farewell for another reason, too. Actors and characters in this universe often make return appearances. “I wouldn’t say it’s as black and white as a character you’ll never see again. I don’t think that’s necessarily the case. Our show has a lot of exceptions to the rules,” he declared.

Having said all that, Murray knows the DiNozzo / McGee dynamic is a special relationship and he’s going to miss it. “The friendship and the bond and everything. The whole relationship between McGee and Tony has always been so much fun for me to play, personally and professionally,” he said. “We have a very similar sense of humor. And we have fun riffing with each other and off each other.”

“Early on, it was funny. I remember at one point we’re sort of looking at each other going, I hope we still have a job next week,” laughed Murray. “But it seemed to work. They liked it. They let us continue. But it was something naturally built over time. That’s a dynamic and a relationship that
— obviously, I can only speak for myself — and I’m sure Michael feels a similar way. But it’s been an incredible thing. We’ve built this relationship and had it for years and years and years.”

According to Murray, Tony and Tim share a sibling-type connection. “A lot of people would be like, ‘How can you stand Tony? He’s so horrible to McGee.’ I was like, what? Because I never got that feeling at all. No. They’re brothers. They’re like little brother and big brother. McGee’s kind of like the schoolboy and Tony’s the older frat guy. There’s a lot of hazing.”

But there might be a method to DiNozzo’s madness — a purpose to all the hazing, pranks and nicknames. “A lot of what Tony has done over the years has built up McGee. Has given him confidence. It’s taught him how to deal with things and stand up for himself,” he theorized. “And I think that doesn’t come out of — as far as the Tony character — that that doesn’t come out of him being mean at all. And I know Michael never viewed it that way at all himself.”

Sure, there were fights and friction and McGee’s hands being glued to keyboards. But there were positive, heartfelt moments, too. Murray brings up the Tim rescues Tony scene from Season 5’s “Leap of Faith.” “I remember when McGee pulled him over the wall in a parking complex — seven years ago in an episode where he was in a precarious position — and pulling him up over the wall and McGee and Tony just sort of laying there collapsed. And Tony’s like, ‘I love you so much, McGee. I love you.’ It was like that, you know?”

“And in “Chimera” in the 100th episode, there’s a scene where Tony’s in a boiler room trying to work on something and he’s started to get some sort of cabin fever in there and he’s freaking out a little bit,” he continued. “McGee comes in and he’s trying to calm him down and get him to relax. And that was one of the first moments where you saw McGee sort of like take the reins and be like…okay, I’m going to be the adult here. I’ll tell you how we’re going to do this.”

He feels that together, these last three episodes of Season 13 — “Homefront,” “Dead Letter” and tomorrow night’s “Family First” — are “a lot of fun for the longtime fans as well as anyone who watches the show. There are some Easter eggs there for the longtime viewers.”

With Tony leaving NCIS, that could mean Tim will have to step up as Gibbs’ next Senior Field Agent. Murray didn’t give anything away but he did talk about what kind of SFA McGee would make should he get a promotion.

“If he were to be a Senior Field Agent, it would almost be a natural progression,” he speculated. “I feel for the character. ‘Cause the character has been a lot about growth. Obviously, he’s gone from super rookie probie agent who couldn’t put two words together, stumbling over himself, fresh from MIT guy. To learning a lot of common sense and a little bit of street smarts along the way. People around him have taught him these things and his experiences.”

“McGee has changed a lot over the years. And that’s something I’ve pushed for from the beginning and everyone was very receptive to. For me, I’m down for the lot of the long term exploration of a character,” he continued. “McGee has been trying to be the best agent he has and has become so much better and has so much experience and can get so much done and does so much. That it would just seem naturally to work well. If the character were to become the Senior Field Agent, it would just seem logical. And character-wise, the right way to grow.”