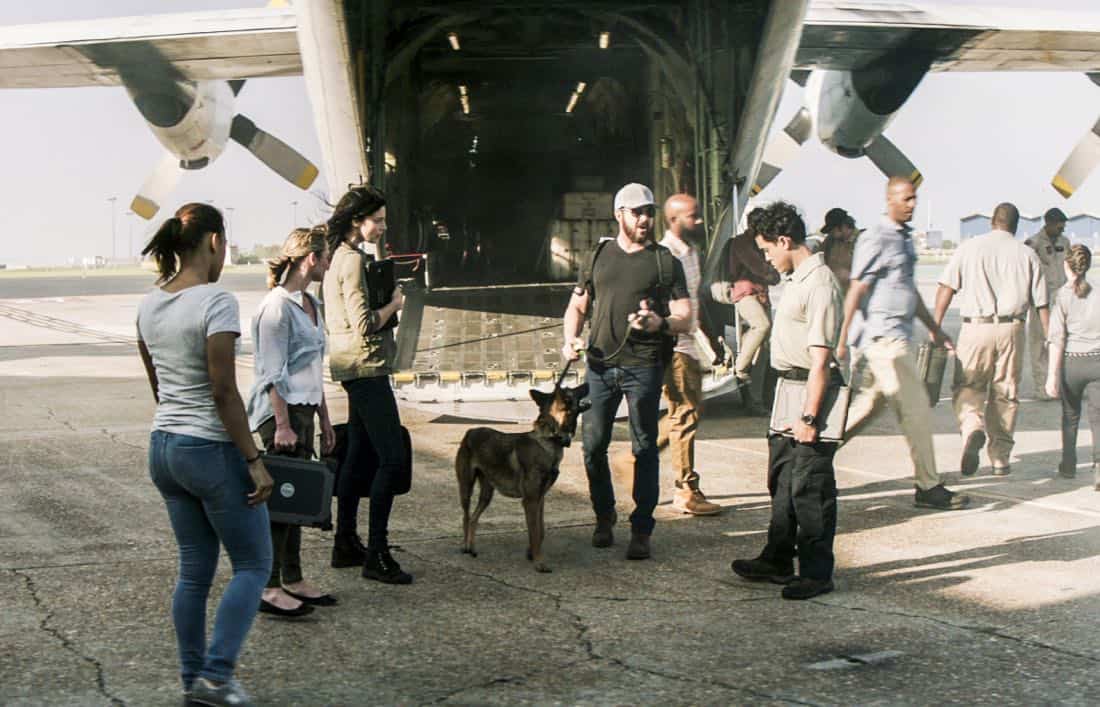 In the CBS new drama series SEAL TEAM, there is a special addition to the team: Dita, a real life police dog recruited to be a part of the Tier 1 operator team that executes counterterrorism missions across the globe. One of the little known facts about Tier 1 operators is that canine units are regularly used to assist in missions. CBS’ SEAL TEAM adds a layer of authenticity to its team by having Dita on board. In an exclusive interview, Justin Melnick, Dita’s handler, talks about what brought Dita to SEAL TEAM and the kind of training she has had, as well as which kind of missions she is used for on the show.

How did you and Dita get hooked up with the show?
JUSTIN: I had a consulting company for the military and for law enforcement for a while and Dita was a police dog while I was a police officer. The detective guys that are on the show were former special operations guys that I know from another life. Christopher Chulack, the director. From ER to SOUTHLAND, he’s all about real. These dogs are notorious for high drive and literally eating everybody, and they knew that I had a million in one dog that could do all this stuff that Navy Seal dogs could do. So they hired us to come down for the pilot. My chief of police gave us a couple of weeks off, and then the pilot got picked up, and he said, “Hey, go to Hollywood. Go make your TV show and then come back and we’ll take her to the children’s hospitals and the schools, play a clip from your show, and let the kids meet her.”

What division do you work for?
JUSTIN: I work in the training division out in Indiana and then I volunteer with Dita off on the border, down with another agency in New Mexico.

Now that the show has been picked up are you guys gonna be flying back and forth?
JUSTIN: No, we’ll be out here until the duration. When we find out what’s going on with it, then there is a chance I might not be able to keep my powers of arrest because we’ll be out here.

What kind of stuff do they have Dita doing?
JUSTIN: She’s a SEAL Team dog. So whatever SEAL’s do: back flip out of helicopters, find terrorists, find explosives, find missing people. There is nothing she can’t do.

Can she actually do all that?
JUSTIN: Oh yeah. Not explosives. She finds narcotics, but it’s the same principle of tracking and searching.

How does she do with getting through airports, if she is narcotics trained?
JUSTIN: She’s fine. When we go to the airport, I just make her lay down and I go through the x-ray machine and then call her through.

How long did it take to train her?
JUSTIN: Every day is training. It’s like having a 13 year old hyperactive ADD child. You just need to constantly find things that motivate them, and that they associate and enjoy.

How long has she been training? How early an age did she start?
JUSTIN: Oh, at four months we started with obedience. Normally, you start with order detection, but we switched originally to human remains. Then we switched it to narcotics.

So she’s been working her whole life then.
JUSTIN: Every day is work for her. People get jealous that I get to bring her in restaurants with me. But the reality of it is that she’s got an amazing life. She gets to experience more than most dogs. Most dogs just get to be around and get loved on all the time. She’d just be miserable if that’s all she did. CBS has ultimately given us millions of dollars in training that local law enforcement can’t never afford. We have access to expose her to gunfire, vehicles, helicopters, and airplanes.

Since you’re always with Dita, how much on set are you?
JUSTIN: I’m a character on the show now. So she’s with me on every mission, except for our water missions.

She doesn’t like water?
JUSTIN: No, she loves water, but they don’t make scuba tanks for dogs yet.

What kind of adjustments has Dita encountered?
JUSTIN: She doesn’t like the air in California though, it’s very dry. So she’s on a crazy diet of like six different types of oils to help medicate that and I rub her down with coconut oil.

Does she like that?
JUSTIN: Not necessarily, but it always soothes. She also eats a lot of coconut oil, olive oil, and four different types of fish oils.

What kind of diet does she have?
JUSTIN: If I’m out here consistently, I’ll switch to an entirely raw diet and go to the the butcher and get raw salmon. Considering we have traveled for the last three and a half years, I need something I can get all over the country, so she’s on a limited ingredient diet from Blue Buffalo to grain-free. Then I add salmon oil, Alaskan pollock oil, anchovies oil, glucose tablets, olive oil, coconut oil. I had her tested for allergies, and the Belgium Malinois breed is actually really good with fish.

Are you ready for Dita to have a big career now that the show’s taking off?
JUSTIN: [Laughs] Hey, just like I always say: ride or die.

To see the amazing feats that both Justin and Dita get to participate in, be sure to tune in for the premiere of SEAL TEAM on Wednesday, September 27th at 9:00 p.m. on CBS. You can also follow the adventures of Dita on Instagram at: DitaTheHairMissile Link: https://www.instagram.com/ditathehairmissile/

And here’s Dita at play in photos provided by CBS:
http://www.cbs.com/shows/seal-team/photos/1007802/seal-team-s-canine-co-star-works-hard-and-plays-harder/