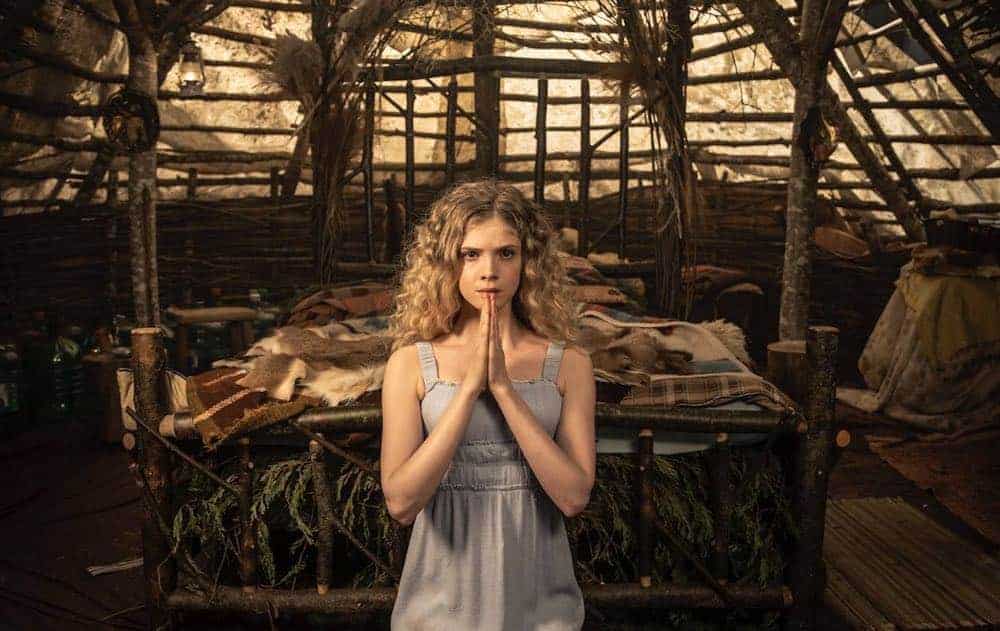 Making its online debut is the new Facebook Watch series SACRED LIES, which blends elements from modern stories of cults and brainwashing-trauma with a dark fairytale of a young girl who escapes from a monster, but who loses her hands in the process. SACRED LIES will look like a troubled teen story, but as you watch, you will see how the classic Grimm fairytale blends into the modern horror. In an exclusive interview, show runner and executive producer Raelle Tucker explains where this murky story comes from and how it is really about the empowerment of a young girl, who is finally choosing her own destiny.

Maybe you could just talk about how you became attached to this project and why you think now is a good time for this particular subject.
RAELLE: About 3 years ago, I optioned the young adult novel “Sacred Lies of Minnow Bly” by Stephanie Oakes, because I’m obsessed with everything cultural-related, partially because I spent some time in a cult, the Rajneesh Cult — you might’ve heard of it if you’ve seen WILD, WILD COUNTRY — when I was a kid. Even though I had actually really positive experiences of growing up in that cult, I was always super fascinated with what drew people to want to believe so deeply in someone else, and kind of give up their lives and their identities, often, to follow someone. So, when this book dropped into my lap, I fell in love with the premise and the fact that it was a modernization of a fairy tale, a Grimm fairy tale called the “Handless Maiden,” and it was set in a cult, and the main character, the character Minnow Blye, was unlike any character I’d ever seen or read before. She’s this 17-year old girl who grows up in this kind of bubble outside of society in a cult in the Montana wilderness, and she’s taught the way the world works and all of these things by prophets who teaches her that the stars are gonna die, and all of these things that don’t end up being true, but she grows up inside of this bubble and kind of believes that she understands the universe. And then, one day something really dramatic happens and she escapes this cult, and now she ends up out in the real world and has to learn it all for herself. She has to find her voice, and she has to decide who she believes in and who she wants to become. So, for me, all of those things made it really fascinating and it was ground that I hadn’t seen covered, particularly on television in the young adult audience, but also I felt that this time right now in the middle of the golden age for television was the time to explore a character like this. Until recently, we could have Tony Soprano, Walter White, you could have Don Draper, you could have all these flawed male characters, but it was not okay for female characters to be unlikable or be dangerous or be more than one thing. And the thing about Minnow is she is not a perfect character. She’s done some terrible things, and she is complicated, and she can be off putting and confusing, and I think we’re now at a point where women can tell the kind of stories that show the humanity of flawed character stories that we weren’t able to do for

You are right. This is a time of female renaissance of really complicated roles for women, which is very encouraging to see.
RAELLE: I think particularly for the audience that we’re most trying to reach out to, which is the young adult audience. I don’t think they’ve had a lot of characters that are allowed to care about more things than fashion and boys. So I think that this character is a character who ends up in juvenile detention, and that’s where she has to really learn for the first time what true freedom really means, and true freedom really is the ability to decide what you believe in and who you want to become in life, and that’s a really deep, profound journey for a young character, and one we don’t normally get to see, so there’s a lot of really exciting things to dig into.

The other thing is the perception of the reality that we are in an era where — this year, in particular —we’re seeing a lot of “gaslighting,” where people are trying to tell us what the reality is, and we’re starting to doubt that reality. So, it’s very identifiable to see somebody like Minnow trying to figure out life beyond that cult, where she’s been told so many things that she’s figured out now are not true.
RAELLE: Absolutely. You’re so right about that. Pretty much all of what the Prophet had been teaching her during her whole life was to not trust the things that she believes, and not trust logic, and now she has to go out in the world and unlearn all of that. So, yeah, it is a very resonant journey right now.

Maybe tell me a little bit about your lead actress Elena Kampouris that you cast as Minnow and why she seemed like she could embody that role.
RAELLE: We put a world-wide search for the character, Minnow Bly. We looked in England, in Australia, in South Africa, in Canada, and obviously all over the United States, because we needed to find an actress that was a young actress that could carry a television show — she’s in almost every scene — but also accurately portray a person with a disability and a very, very complicated raw, strange girl. So it was a very challenging role. We spent 4 months before shooting searching desperately for the right Minnow. The first time Scott Winant, the Executive Producer/Director and myself saw Elena Kampouris, we absolutely knew that it was her. She was one of the few actresses that immediately embodied the physical aspect, she immediately had a consciousness of how she was using her hands and her body, and had obviously done her homework. The other side of it was the audition piece that we had her do, it’s from the pilot. She has to sing a song. It’s a song, “I’m a Believer,” Neil Diamond song, and she has to sing the song and cry and sort of collapse in the middle of it, and it’s not a performance. This character isn’t singing to perform for anyone; she’s living a very important, painful memory for herself, and it had to be really raw and imperfect and vulnerable, so to find somebody who had the bravery to stand up there and sing like that and weep and have no concept of her body and all of that was a lot. Elena has a Broadway background, which you could absolutely feel in how serious she is about the work. She had to spend six months with her hands taped up, she had to learn how to do puppeteer five sets of different prosthetics while performing and emoting and being connected to the material. Every time she moves an arm on screen, we had to choreograph that with camera and decide which prosthetic she should be wearing. So, it was incredibly challenging for a person of her age to show up and carry a television show, let alone do all of that, and she was an absolute revelation to work with.

What can you tease that you think the audience should look forward to when they watch the series.
RAELLE: I think what’s so special about SACRED LIES is that it has a mystery element and a suspense element, and yes, some horror elements. But it’s a Grimm fairy tale, so it’s grim. But at its heart, it’s an incredibly hopeful show — a show about discovering what you believe in. That it’s always having the power to decide who you want to become no matter what happened to you. You are not the things that happened to you. That’s the message, and I think it could be a really profound show for young people, and also really entertaining and fun and dark and creepy.