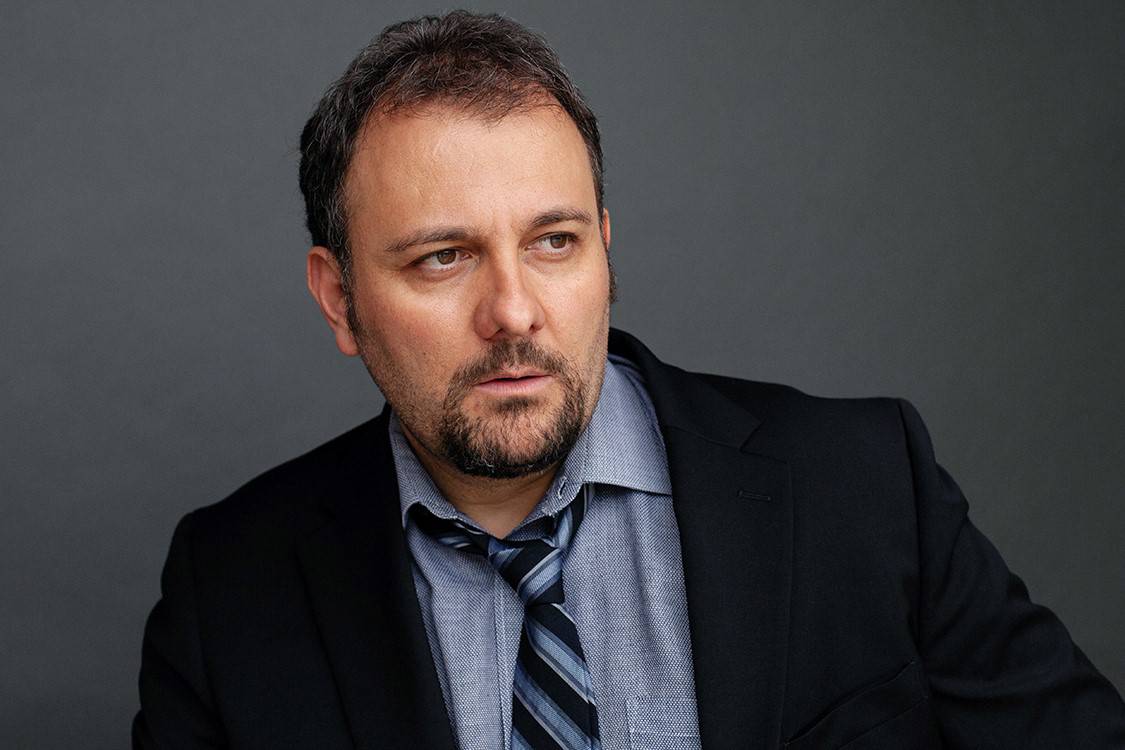 In the new film of young love in land of exquisite beauty, “Running For Grace” invites viewers to cheer for the triumph of forbidden love in a timeless tale that warms the heart, as love should always flourish no matter where the heart leads. In an exclusive interview, Stelio Savante talks about his contributing role in the film, as well as reflecting on how fun the experience of working on it was for him. Stelio also shares a few key lessons he has gleaned over the course of his prolific career.

What was the initial appeal for you about working on “Running for Grace”?
STELIO: After reading the script twice, I felt that I could bring Mayor’s salt of the earth, blue collar, immigrant challenges some truth. In a way that helped the story progress from the first frame of the film to the end. I also appreciated the integrity and realistic challenges and conflict regarding adoption and diversity that the film took on in an unapologetic manner. I’d seen David Cunningham’s earlier work and I really dig the way he tells stories.

How would you describe who your character is in the film?
STELIO: My character ‘Mayor’ is a Portuguese ‘Cowboy’ and the local mayor of the region who is also the foreman of Danielson’s coffee plantation.

What do you most admire about him?
STELIO: The character is driven by loyalty, a need to honor Danielson and be faithful to be him and his estate. Simultaneously, Mayor understands and appreciates the immigrant struggle of Jo… I love the contradiction of those two elements because it rings true, and I felt based on my own life experiences as an immigrant that I could honor the writing, the character, and the director’s vision.

What is it like working alongside Olivia Ritchie, Ryan Potter, Matt Dillion and Jim Caviezel on “Running for Grace”?
STELIO: I worked mostly with Matt in several scenes. He’s a very generous collaborator and a great listener. So damn likable. We naturally connected both on and off screen, he showed me a significant portion of his Afro Cuban documentary and being South African myself with a Cuban wife, I was very drawn to what he’s trying to achieve with ‘El Gran Fellove’. Jim I have worked with before. I guest starred opposite him in several scenes on PERSON OF INTEREST. I appreciate his intensity and commitment to the work and enjoyed creating with him on “Running for Grace” in addition to our personal conversations and time together. Ryan and Olivia were not in many of my scenes, so I can’t comment much.

Any favorite scenes that you can share from working on the film?
STELIO: Filming in the ‘village and marketplace’ that production designer Alessandro Marvelli so richly brought to life in Hawaii was special. There was a day on set when some of the original coffee pickers came to visit. We’re talking beautiful Japanese immigrants in their 90s, one of them in their 100s… and they were very moved by what they saw, it was a pretty emotional day. Here we are telling their stories, and they come to visit set and Alessandro’s work took them right back to their childhood. Mayor’s office and store was part of that set, you can only imagine what that meant to me.

As an actor, what has been the one thing you haven taken away from the experience of working on “Running for Grace”?
STELIO: To trust my instincts more than ever, to never be afraid to take chances in the moment. I’m almost 100 projects and 20 years into my film and TV career and in my prep I’ve always researched things to death. To be as prepared as possible in order to be as loose and open as possible on set. On this film, on this set, we had a brilliant director that empowered the storytellers with a tremendous amount of trust and I cannot underestimate how liberating that is.

Unfortunately, sometimes you’re working with very insecure directors who try to over-direct as if they don’t trust the writing or their own casting choices. So they overthink everything. Or you’re working with very green talent who never fully commit to what they’re doing because they don’t understand the medium. Creatively this film was the opposite of both those scenarios and therefore very rewarding. I have much gratitude towards all my cast and crew involved, including Beverly Holloway the casting director, who fought for me to self-tape and that’s how I booked the part.

Then what was the initial appeal for you about working on “No Postage Necessary”?
STELIO: Jeremy’s script was smart, humorous and very contemporary; I also liked how it felt very Americana and had you rooting for the little guy. I wanted to collaborate with Jeremy and had worked on a pilot with Charleene before. Plus, I brought my pal Michael Beach into the project and you can’t beat working with friends.

How would you describe who your character is in the film?
STELIO: Agent Ames is an opportunistic federal agent that plays both sides of the law. He feels as if he’s not gotten the recognition he deserves so he takes matters into his own hands.

What do you most admire about him?
STELIO: I really appreciate how comfortable he is in his own skin. He beats to his own drum with not a care in the world about what others think of him.

What is it like working alongside George Blagden, Charleen Closshey, Robbie Kay and Michael Beach on “No Postage Necessary”?
STELIO: Michael is a longtime friend I’ve done plays/readings with over the years and he is one of the great actors of his generation. After I brought Michael on, I discussed with Jeremy that our characters and the film would benefit from us having a scene together. Jeremy was secure enough and generous enough and saw the value. George brings humanity and elicits truth when you’re working with him. His Athelstan character was one of my favorite on Vikings, and George brought the same good natured truth to this role. He engages, has a strong work ethic and will have a very successful career. I’m constantly recommending him for roles. Unfortunately, didn’t get to work with Charleene or Robbie.

Any favorite scenes that you can share from working on the film?
STELIO: The above mentioned scene with Michael Beach. I’ve made a mental stamp of that experience, it meant a lot to me.

As an actor, what has been the one thing you have taken away from the experience of working on “No Postage Necessary”?
STELIO: TAMPA IS HUMID and I feel for federal agents or anyone in uniform having to work in those conditions in a suit and tie.

You also made a number of appearances on the TV series “Ugly Betty” as Steve. What did you enjoy most from that experience?
STELIO: Yes. I had a recurring role with my own storyline and felt very privileged to be part of the lead ensemble cast of such a successful show. Showing up to table read rehearsals and you’re sitting reading with Salma Hayek, Vanessa Williams and Rebecca Romijn… you’re thinking, “okay, this could be a lot worse.” I enjoyed my friendship with Aussie Alan Dale. He’s a huge rugby fan and most of my scenes were opposite him. I found showrunner Jim Hayman to be a gentleman and a talented director.

What has surprised you most about your career so far?
STELIO: I’m very partial to expressing myself through behavior over exposition, meaning that I’m the guy that annoys the director/writer into minimizing my dialogue down. I’d rather show you something than say it, which to me is far more interesting rather than the mostly boring and obvious expositional ‘over-talking’. Because I’m a minimalist, I like to show behavior and body language over dialogue and I like characters to breathe…We’re talking French New Wave and Italian Neo Realism in terms of approach…and because I work in this manner I’m surprised that a lot of casting directors and directors/producers have been as open to that as they have in the room or on set. I like to make things my own. You get a lot of resistance to that early on in your career, but as time goes on and folks know your work, they seem a lot more open and that has surprised me.

At this stage of your career, what do you think you have learned from the roles and projects you have worked on?
STELIO: It is a beautiful dance. I’m always learning something new…specifically with my senses…. so once I figure it all out, I’ll let you know. I might never and that’s ok too as long as I keep discovering.

Then what are the perks of where you are in your career right now?
STELIO: Having enough important casting directors that are fans of my work and request me in person where it matters (LA, NY, Atlanta, South Africa). Because they care I’m almost never idle, I’m always working. They are the unsung heroes of this business and it is time they got their respect from the Academy. It is also good to be in a position where I receive a significant amount of direct offers because folks know my work. I’m not famous, nor do I ever want to be. But I’m certainly recognizable enough that I’m in demand and the offers keep coming in, sometimes from folks I’ve already worked with and that is a massive compliment and means a lot to me. The journey and the relationships…

What has been your proudest achievement as a working actor at this point in your career?
STELIO: That I’ve been able to make a decent living doing what I love and have devoted myself to. Because of my career, I’ve lived on three coasts (NE, SE and SW) I’ve bought a home, I’ve put my daughter through private school, I’ve travelled to some amazing places and worked with so many of the great ones who have become close friends… and I feel like I’m just getting warmed up because I’m still so hungry and focused.

Has there been any great advice you have gotten about working as an actor?
STELIO: From my mentor Diane Venora: Honor the writer, honor the character, honor the director, and honor the work.

What advice would you offer to other upcoming and aspiring actors?
STELIO: Become a sponge, learn to listen and observe from those that have done it well and for a long time, and try to speak far less and not force it. Be prepared to unlearn bad habits that you’ve brought with you.

Do you have any other upcoming projects that you can share that fans should keep an eye out for?
STELIO: “The Cleaning Lady” just premiered at FrightFest. I’m not a huge fan of this generation’s horror films. But Jon Knautz knows the genre and “The Cleaning Lady” is a brilliant psychological thriller and character study that messes with your mind. I’m excited for audiences to see it. Peter Bishai’s “Rapid Eye Movement” hits really soon. I star opposite Francois Arnaud. Lionsgate’s family film “Bernie the Dolphin” hits theaters in December and you can also catch me as Dino in the upcoming season of Tyler Perry’s THE HAVES AND THE HAVE NOTS.