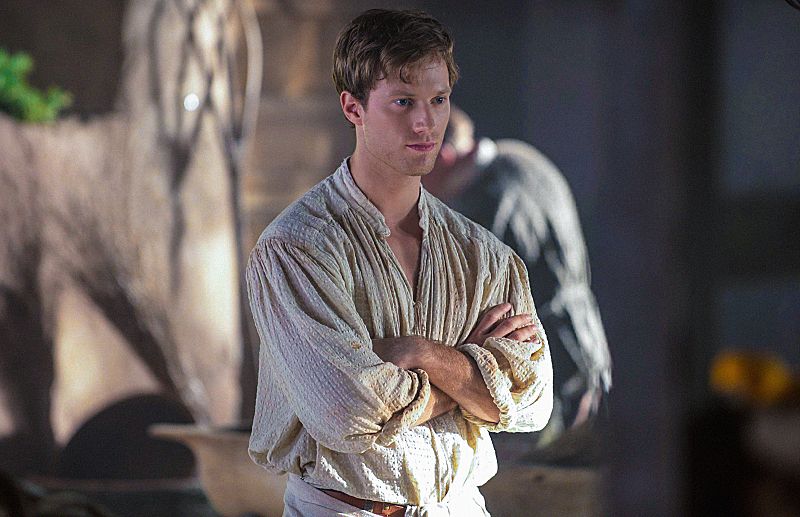 All is fair in love and war, and while Leith (Jonathan Keltz) has been a stalwart and true soldier by his king’s side in war, when it comes to love, no one comes between him and Greer (Celina Sinden).  So it should not have come as such a surprise, that when Leith turned to the Vatican to get Greer’s marriage to Castleroy annulled, he was asked to be the church’s inside man and spy against the king.  Needless to say, in light of that risky career move, the bromance between Leith and Francis (Toby Regbo) may indeed be over with treason now coming between them.  However, there is still a kernel of belief holding out that Leith will still find a way to stand by his king and not betray him completely to the church.  But we all know that if it comes down to it, Leith will always stand by his true love.

In an exclusive interview, star Jonathan Keltz talked about the tough choice Leith has before him and how much more turmoil he and Greer may have to endure in their pursuit of their happily-ever-after.

What is the story with this “deal with the devil” that Leith seems to have struck with the church to annul Greer’s marriage?  Is that something that will come right back up quickly and we will see the fallout from?
JONATHAN:  We’re going to see the developments from it soon and we will see what all that is.  But he has a test of him:  how far will he go and how much will he compromise his morals and his values and his loyalty to his country, his crown and his friend just to be with the woman he loves — and just how deep will he go down the rabbit hole to get the annulment?

The bromance between Francis and Leith is off then?
JONATHAN:  Well, it is hard to hang out with your friend is in a coma. But, hopefully, he will be able to wake up eventually and they will be able to hang out again.  But the bromance is off for the moment.  They didn’t exactly end on a good note in the last episode.  Leith did not realize, nor did Francis, that Francis was battling such a physical demon within in and that definitely colors the firmness that Francis brought to their conversation, which motivated Leith to go to the Cardinal.  So they won’t have any play dates for a little bit.

So Leith might be picking a new bromance partner.  Will he be looking to hang out with Bash (Torrance Coombs) now?
JONATHAN:  I hope so. Certainly outside of the “action” takes, Torrance and I are getting our good hangs in.  But the next few episodes shows Leith juggling two new jobs:  his new job working as Claude’s bodyguard/babysitter and the new job of working for the Cardinal.  So it is about how Leith is going to balance those two jobs without compromising himself, compromising everything he stands for, and getting in trouble with Catherine de Medici.

He’d better watch out for her.  Catherine not necessarily going to take to him as Claude’s bodyguard all that well.
JONATHAN:  (Laughs) Oh no she’s not!  He’d better be well behaved.

Leith seems to have aspired to be this lord with lands and yet now he’s a quasi-spy/bodyguard.  Is he kind of regretting some of his life choices at this point?
JONATHAN:  I think it depends.  The thing is that all of these moments have all built so that everything that he wanted for his life with Greer and everything that he dreamed that it could be is now possible.  The dream could be possible.  But along the way getting to this point, no matter who Greer is and what she has wanted, after these struggles that she has endured, it has formed this inner strength and resilience and determination and independence has changed what she wants out of life.  Whether or not she can reconcile with what Leith wants and if he can understand who she is now, they will have to see if they can reach a compromise.  In these last couple episodes, they have begun to realize that it not about their status or what Greer is doing as a profession is something Leith is ashamed of in any way, it is building towards:  what would this mean for a family? How could Greer balance being a wife, a mother, a madam and all of those things and what would that mean for their children?  Now that Leith has security at court and has a career, and being a man who is slowly but surely is on the rise and friend to the royals, he wants to have a family and he wants to have his home life in order.  So we will have to see whether or not, Leith and Greer are able to find that middle ground and together collectively make their love the most important thing, and not do it individually and try to control the relationship.

What do you love the most about Leith and Greer’s relationship?  They have had such a rocky road with their romance.
JONATHAN:  It’s definitely been a rocky road.  I think that the stakes — the way that it has been a constant motivator and a constant driver for Leith — whether it was in battle or whether it was when they were sneaking around the hallways and whether it is now as he is fighting through all these other political obstacles, no matter what, at the end of the day what is most important is getting to wake up next to her every morning.  So it’s been great being able to fight for that on the show and fight for a love like that — particularly at a time when it was not so prevalent or so committed to.  I think we have been able to showcase what the challenges were of the time for two people that were in a situation like that — and, luckily, I am happily in a relationship in my own life that I can use as a basis for that.  I think that our love of self, our love of career and a love of our partner are the most important things — and I think Leith feels the same way.

Leith is the great romantic on the show.  Above all other characters, he pursues romance even at personal cost to himself.  That is remarkable and it shows an unusual strength within him.
JONATHAN:  Thank you.  I think it is an important part of the character.  It was something we sort of found in his evolution from kitchen baker to who he is now — for him, it is honor, love and respect.  Those are the core values that I try to bring to the character and that sort of purity of it.  But, like I said, what will he be forced to compromise to maintain that or to lose that?

What is Leith and Greer’s greatest threat?  Who is the one person they should really be keeping an eye on?
JONATHAN:  Their greatest threat is themselves.  It has to be a partnership and they are both trying to assert what they want out of the relationship.  Leith is determined that this dream that he has used as motivation, as a fire-rod to persevere through all those ordeals, is finally possible and he will do whatever he can to make it happen — to force it to happen.  And for Greer, everything that she has wanted out of life has been completely taken from her and now has shifted and has revealed an entirely different side, so she is trying to put this new life upon Leith.  So the greatest obstacle is whether or not they can compromise and forge a new life together based on what they both want to achieve.

Should we be worried that Narcisse (Craig Parker) might get wind of what Leith is up to in his deal with the church?  ‘Cause Narcisse is not going to take too kindly to having someone else try to manipulate the king.
JONATHAN:  Narcisse wants to be the only fox at court.  So we’ll see if that has any implication for what is going on. There are big changes and big evolutions happening for his character, as we saw in this past episode and in this upcoming episode as well.  Everything is going to be in turmoil at court for the rest of the season.  There are five episodes left and it is a sprint to the end.

What is the funnest part of working with Celina in all the Leith/Greer scenes?
JONATHAN:  Actually, I just wrapped for the season and the last day of shooting for everyone is tomorrow.  So we were sitting the other day and reflecting on the fact that it is unbelievable that it has been two years.  It’s been two years of us navigating this relationship and navigating their time at court — of them trying to find time and balance to do all that. It has been so much fun.  We have been so lucky to have the arc to the story that we have and to be able to sort of live through this life.   It has been two years for us, but it has been probably 3 or 4 for the characters.  So getting to live through that and go through that journey and be there since the beginning has been a lot of fun.

What can you share about what is coming up in this week’s episode that fans can look forward to?
JONATHAN:  In this week’s episode, it will be about the lives of the two brothers hanging in the balance and seeing if they can pull through and fight through everything that is ailing them, and the compromises of one or both have to make to persevere through this and survive and to keep the family moving forward.  Then also for Leith, how is he going to juggle two jobs at the same time as well as juggling the woman of his dreams.  Where will he fall short, where will he compromise and what slip ups and mistakes will he make along the way? It’s definitely a fun episode. Everything about court, everything about the relationships is going to change for everyone in the next few weeks and will reshape a new France, a new Scotland and a new England moving forward.

To find out whether true love will win out and if Leith can still stand by his king and country in the process, be sure to tune in for an all new episode of REIGN on Thursday, April 16th at 9:00 p.m. on the CW and the remaining episodes as the show races towards its Season 2 finale on May 14th.