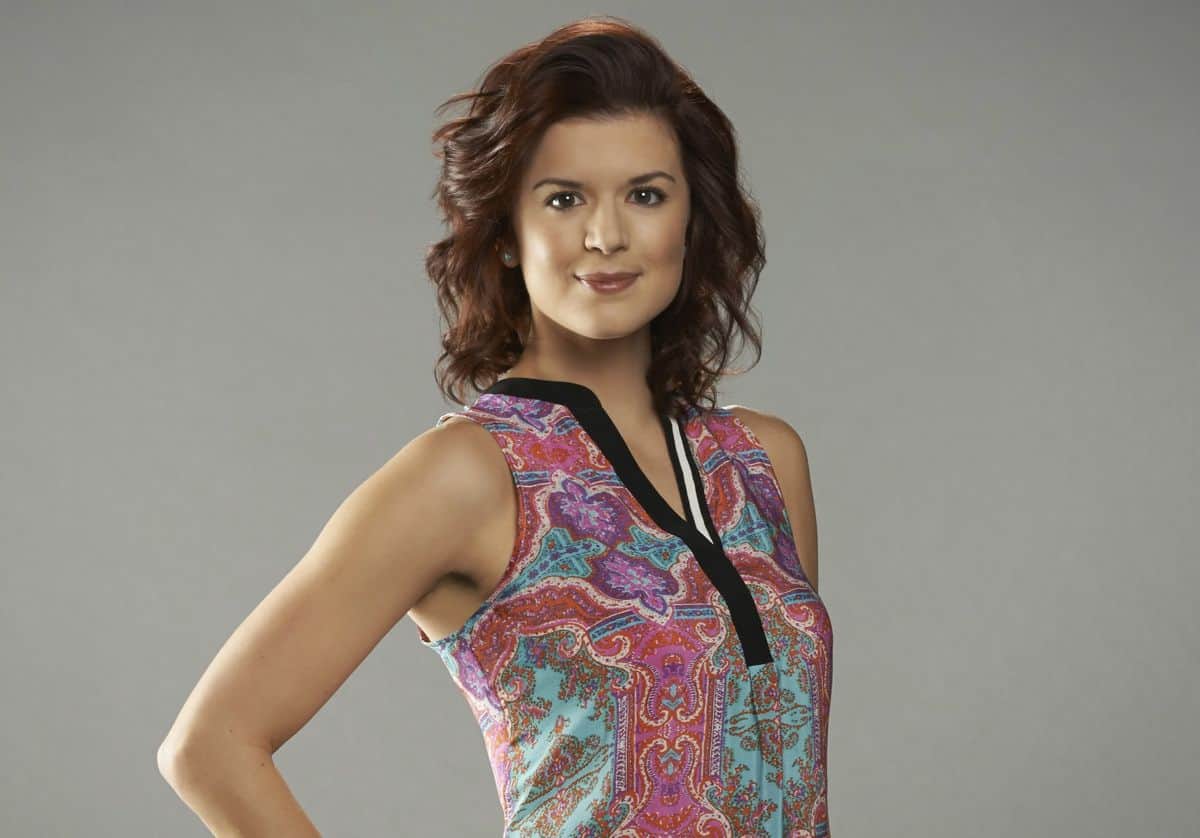 With Thanksgiving over, it is now officially Christmas movie season and one of the first movies of the season is Up’s My One Christmas Wish starring Rookie Blue’s Priscilla Faia. Airing this Sunday, November 29 at 9 p.m. EST, My One Christmas Wish is based on the true story of Jackie Turner (played by Glee’s Amber Riley). After growing up in an abusive home, college student Jackie wants nothing more than to bring people together for Christmas. With a little help from her best friend Kate (Faia), Amber puts an ad on Craigslist in hopes of giving everyone a home for the holidays.

Faia recently spoke to Seat42F about her character Kate, what it’s like to film a Christmas movie in the middle of summer, and what it was like to say goodbye to Rookie Blue. The talented actress also shared some teasers about her upcoming DIRECTV series You Me Her. Read on for the scoop on My One Christmas Wish and much more from Faia.

What can you tell us about your character in My One Christmas Wish?

Priscilla: I play Kate. Jackie Turner (Amber Riley) and I are best friends, we work at a martial arts gym together. I’m the best friend, the support, and the great thing about Kate is that when she finds out about what’s going on with Jackie’s life, their connection becomes even more intense. For me, that was the best part of my arc in this story.

The movie has such an emotional premise. Do you think it will inspire viewers?

Priscilla: The great thing about this story is that it redefines what family is. I think we all have an idea of what family means: blood relatives and what have you – the general definition of what family means. I think that, especially in this day and age, family doesn’t have to be that. We find family in other outlets with friends and because we’re all connected on this new internet basis where we can all connect with each other, it provides us with a bit more opportunity to connect to people we wouldn’t have been able to back in the day.

There is darkness in this movie. Jackie’s character has struggled a lot in her childhood and that’s something Kate doesn’t really understand. I think she has an idea, but Kate came from a very stable background. When she finds out about the actual struggles that Jackie went through, it is shocking. For me as an actor to be able to hone in on that and really connect with Jackie as she tries to make this wish come true, is a dream for me.

Is there a scene in the movie that you are especially proud of?

Priscilla: I had a really great time working with Amber. We connected, and she is an amazing person. She’s wildly talented and we have a scene that I remember felt like the heart of the movie for me. It’s a scene where Jackie has called me over because she’s going through a really hard time. She has just gone to meet her dad and it is extremely disappointing. Instead of being by herself she reaches out to me and we have this moment where she tells me about her dad and the struggle she’s had. It was really lovely. I really hope that translates and people see the pain. She also comes up with the idea for the Craigslist ad celebration to bring people together in that scene.

A lot of Christmas movies tend to be filmed during the summer. Was that the case with My One Christmas Wish?

Priscilla: It was. I mean we were wearing sweatshirts and scarves and it was blistering out. I laughed one day because I was like, these people are going to be watching this movie and seeing us sweat in these scarves and mittens and stuff. It was pretty fun for me actually to shoot that in the middle of the summer because I get to celebrate Christmas twice this year.

Do you have a favorite holiday movie or special?

Priscilla: To this day, every Christmas morning, I always go home for Christmas, and my brother and I always watch Home Alone. It’s always been our thing even if we don’t feel like watching it because at this point it is a tradition.

Everyone was sad to see Rookie Blue come to an end this year. What was it like for you to say goodbye to the show?

Priscilla: I feel like I’m still grieving. It was hard because we didn’t really get to say goodbye to each other. We wrapped the season and went our separate ways for the year, like we do every year. We weren’t sure if we were going to be coming back or not so we were said goodbye for now, so it was a drawn out process. When it was announced – obviously we were told a couple of days before it was announced – we all kind of emailed each other and it was sad. Then again, we are all in the consensus that we are very proud of having six seasons of the show. I didn’t come in until halfway through, but we are all proud of what we accomplished from the actors to the producers and the crew.

It’s very rare to have a Canadian show go that long, and we were all so close. That experience is really what means the most and we will keep that forever. It was bittersweet to say goodbye, but I’ve made friendships that will last forever. I am forever grateful to Rookie Blue for that.

You have a new project coming up, You Me Her with Greg Poehler. Can you tell us about that?

Priscilla: I am really excited; it’s a departure for me. It’s a story about a married couple – Greg and Rachel Blanchard who plays Emma. They have a family and they have come to a bump in their relationship where they have lost touch with each other.

It’s a comedy, so Jack, Greg’s character, on the advice of his brother, decides to hire an escort, my character, Izzy. She moonlights as an escort, but it’s not what you think. She’s a grad student who is super smart and she has a good head on her shoulders, but her roommate Nina has convinced her to basically hang out with these lonely men on the side for money. She doesn’t have sex with them; she just kind of appeases their weird requests that they have. So Jack ends up hiring this girl and it kind of goes from there, we build a relationship… I don’t want to give too much away, but it’s very funny and it’s written by John Scott Shepherd, who is very clever and witty. We’re being directed by Nisha Ganatra who is this incredible, incredible woman who is directing all 10 episodes.

If you could star in any project past or present, what would it be and why?

Priscilla: What first came to mind is Casablanca. It’s just such a classic romantic film and I’m a sucker for those. It’s still one of my favorite movies of all time, but I’m sure I have a dozen answers. I just love stories and storytelling, so I would take any of the classics.