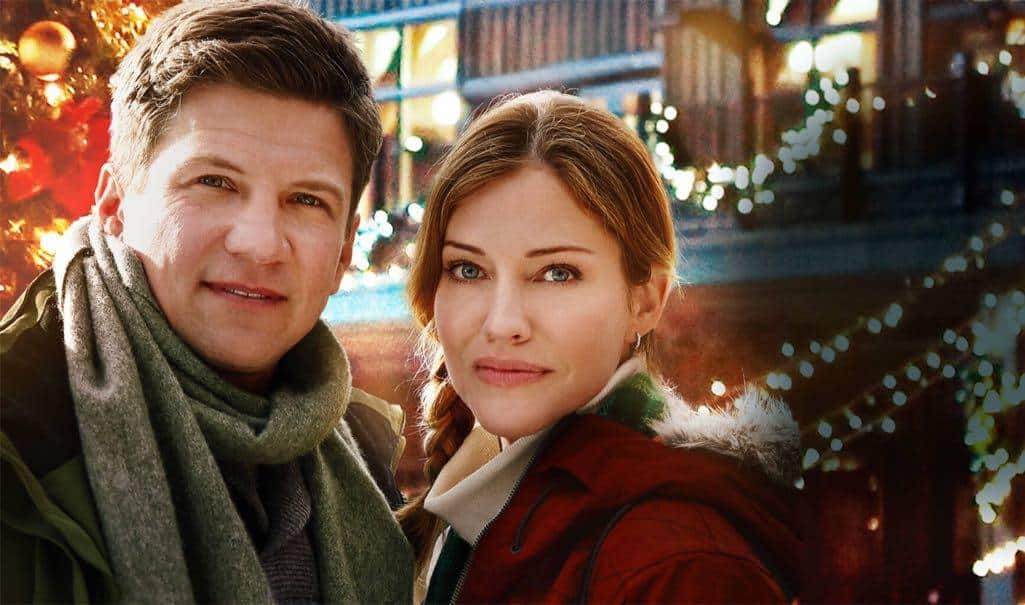 Capitalizing on the wonderful on-screen chemistry of Tricia Helfer and Marc Blucas, Hallmark Movies & Mysteries reunites them in its latest holiday special OPERATION CHRISTMAS. In an exclusive interview, Marc and Tricia shared what it was like for them to work together again and bring this beautiful and poignant film to screen.

Marc, this project reunites you with Tricia Helfer (your KILLER WOMAN co-star) andnow you are doing a Christmas movie. What was this experience like?
MARC: Both good things! It was kind of my first Hallmark go-around, and it kind of felt as an actor as like a right of passage to do a Hallmark Christmas movie — and I got to say, I had such a good time. Obviously, like Tricia and I are friends. We’ve done a few things together and that obviously makes that transition easy. The formula here is there has to be a romantic component and we know that. So to be able to do that with your friend and not have to say “hey, nice to meet you, I’m now about to kiss and grope you,” it always makes things a little more comfortable.

And you already know there’s already great chemistry there too!
MARC: [Laughs] That too. So it’s many jobs. It’s funny how the business has grown because if your budget is so high, you green-screen everything. If it’s too low, you can’t go on real locations. So to get spoiled by Hallmark and have the right amount of money to be able to go on the glaciers and go up Whistler — like every day we were taking a helicopter or a snow cat or a snowmobile to set. It was such a nice group of people. We had a really good time. It’s a sweet story. I play a military guy and we really explored base-life and what it’s like for these families to have to say goodbye and wonder when and if they’re coming back. So it was nice to kind of really spend some time and emotionally live with those families that have to go through this on a real level.

You were able to meet a few of the military families then?
MARC: We got to meet a handful and it was nice to kind of talk to. I’ve done a handful of military-type films, so we’ve explored that a little bit, and to have the whole movie build kind of around that emotional core was kind of fun to go further with.

You and Tricia are both physically active in your personal lives. Did you get a chance to go play out a bit in the real world during filming?
MARC: We did. It was fun. And we both had to ski in the movie. Itt was scripted that we were not very good and that we collide, and funny thing was, turns out we were really good at being “not good.” [Laughs] Again, we had a ball. We were grateful to walk away unscathed. But again it was a great – especially when you get to go spend three or four weeks somewhere with such a good group of people.

When did you find out that Tricia would be your co-star again?
MARC: It was almost back-to-back. Like I kind of knew before. That made the role a little more attractive to me because of the friendship. Again, I’m by no way comparing our actor life to that of the military — minus that little life or death component thing — it’s still kind of like saying goodbye to your family and leaving for a block of time. So to be able to go and do that with a friend, just makes it easier. It helps.

Are you going to be doing more Hallmark films?
MARC: Yeah, I’m doing one right now (THE SIMPLY IRRESISTIBLE BLUEBERRY FARM). So I guess that means they were okay with me. And again, I’m having a ball. We just started, but I’m having a ball doing it. [Laughs] So far, so good.

What kind of a role is it for that film?
MARC: The apple is not falling far from the tree on this one. I’m playing a contractor, which is kind of like a separate passion of mine and what I do in my downtime anyway — restore an old farmhouse that I have.. So it’s pretty fun.

Seems like somebody has been looking at your professional resume and trying to pair it to your personal interests.
MARC: [Laughs] Seems like it, doesn’t it? Let’s face it — every actor lies about what they can do on their “special skills.” But I’m like, “No, I do underwater aquatic dancing.” But lately I’m like, “That’s what’s in the script? Oh yeah, I can do it for sure.” It’s kind of nice to show up on set and know all the tools and be able to actually use them.

How does it feel to be part of this Hallmark world now?
MARC: It has been great these past few months for me. The model they have obviously really resonates and really works and selfishly when you have a family — it’s not $100 million movie where you’re away from your family for six months and it’s not doing a series where you’re away for eight months or something really long — it’s a short block of time to work on good material with good people. Selfishly, it’s pretty good for my life and the things I want. It’s more important to me to be a husband and a father, than go be on some hit show right now.

Tricia, did you know that Marc was going to be involved before you joined the film?
TRICIA: [Laughs] No, I don’t think so.
MARC: She was like a half-step ahead. So it was almost simultaneously. I think that we could have pulled the plug, if the other wasn’t happy.
TRICIA: We had the same agency, so we probably heard about it at a similar time.
MARC: And are agents went, “Hallelujah! We’re doing this.”

What was your experience on working on OPERATION CHRISTMAS?
TRICIA: It was a really good group. A great crew and the director was so fun. It was just a hoot to play with them. The first four days were pretty phenomenal because we were taken it up to Whistler — 7,000 feet up on this glacier and just dropped off. It was phenomenal. You’re kind of going, “You are going back to pick us up right,?” Because you’re dropped off at what felt like the top of the world. So that was phenomenal. Even though it only takes place in the first maybe ten minutes of the film, it really just sets the tone. It was like being on the top of the world.

With two Christmas films under your belt, how do you like playing in the Hallmark world?
TRICIA: You know, I play evil so often that it’s nice to be able to go, You know what? Anybody can enjoy these. My mother will watch them and enjoy them.” As opposed to sometimes you’re like, “Well, maybe you shouldn’t see this one. I loved being in it or I love the film, but you guys might not watch this.” But with Hallmark, you don’t have to worry about anybody seeing it. It’s good family fare. It this film, my character had a bad break-up and she’s turned off love, and he’s lost his wife. So it’s about two people kind of opening themselves up again to love. There’s a lot of a learning involved in it for these characters, but there’s a lot of love.

To see the heart-warming love story that Tricia and Marc have whipped up for the holidays, be sure to tune in for the premiere of OPERATION CHRISTMAS on Sunday, November 20, 2016 on Hallmark Movies & Mysteries.