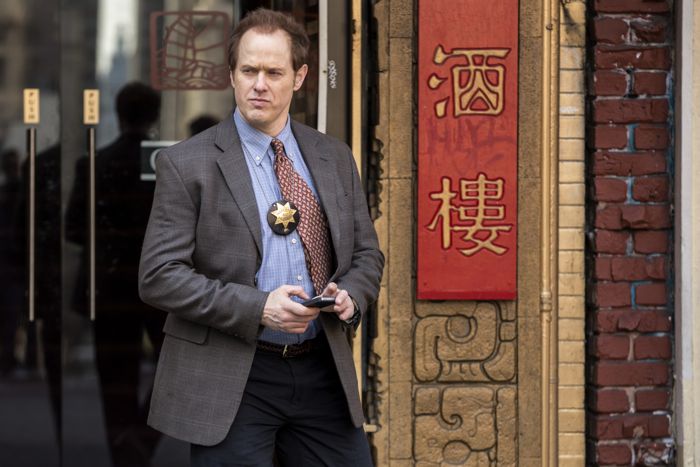 TNT’s intense drama series MURDER IN THE FIRST shook things up in its Season 2 premiere with one of the most drawn-out and terrifying portrayals of a school bus mass shooting ever to be shown on television.  It might have been tough to watch, but it accomplished one thing: it set the bar for Season 2.  It can also be seen as the warning shot across the bow to viewers about what MURDER IN THE FIRST hopes to achieve in its sophomore season: it aims to deliver intensely drama storylines while putting its characters directly in the crossfire.  It clearly has racketed up the action and the personal stakes for each of the characters.  So MURDER IN THE FIRST is not your average cop drama where the characters sit safely behind the desk and can dissect crimes after the fact — personal jeopardy and personal stakes are prevalent.

In an exclusive interview, star Raphael Sbarge talked about the new direction of the show and the appeal for him in working on such a cutting-edge drama series.

It was pretty shocking watching the school bus shooting in last week’s episode.  Were you shocked by that storyline?
RAPHAEL:  It was shocking for all of us.  As a parent, it’s a very tough subject.  I know people who have gone through something like this, and it seems like we hear this in the news more often — and it is brutal.  I think the attempt is in a 12-part series like ours to initiate a conversation.  The way the event occurred, it is essentially telling one event over an entire season and what it will allow us to do is going into it a bit more in-depth opposed to doing it in a one-and-done kind of episode so that we can kind of explore some of it.  All of us keep looking at how we can not find ourselves in these kinds of positions, and what are the elements that create these circumstances, and how are we going to culturally and as parents deal with the complications.  I was on Twitter during last week’s episode and it was amazing how many people said things like, “Wow, guns are so available in my neighborhood, this is my biggest fear” or “my friend was involved in a shooting.”  It is difficult to watch, but it is clearly not too far afield from what we already experience.

It is terrifyingly real and it was gutsy of the show to approach it.  Last season the show opened rather sedately and this season seemed to go off-the-hook crazy right off the bat.
RAPHAEL:  It really did.  It was like a rocket.  The first two scripts, we really just held our breath.  We couldn’t believe it.

Will this be the over-arcing story explored this season?
RAPHAEL:  There is another story that comes in and it will open up yet another series of issues, and the issue that came up in the first episode will play out. But there will be another case.

There is the mystery of the missing woman that was brought up, but that was dropped after the school bus shooting took priority.  So that is hanging out there.  Could that be explored further?
RAPHAEL:  There is an intricate web over interweaving stories that will take you through the season as we find some answers.  (Laughs) I want to leave the mystery of it all as it will keep it fun and engaging.

How does your character Inspector David Molk fit into all of it?  What’s one of his primary focuses this season?
RAPHAEL:  Molk is a detective on the force and the shooting incident really hits everyone pretty hard, especially since he is a dad — and I’m a dad.  It makes me want to go home and hug my kids.  Hug your kids as much as you can.  As far as Molk is concerned, there is another story that will break-out in the 2nd and 3rd episodes, and there will start to be some questions from that.  We will find a lot more about many of the detectives on the force as the show explores the not-so-pleasant eventualities of what happens.

It looks like there will be some changes of the partner pair-ups on the force and changes within the department.  Will that affect Molk as well?
RAPHAEL:  Molk is in the middle of all of it.  You’ll see him definitely in there.  There’s a huge story that will carry him forward.  Many of the detectives become front-and-center in terms of being possible suspects.

What do you like about your character Inspector Molk?  What for you is fun portraying him?
RAPHAEL:  What is great about playing this part is great writing and wonderful actors to play with. The show creates a sandbox in which everyone gets a turn to come in and do their thing.  There is a real sense of great care and respect given to the actors’ process and them being able to find it.  As can be seen from his prior show HILL STREET BLUES, Steven Bochco really loves cops.  He loves their strength and their humanity and the complexity of what they do intermixed with their personal struggles.  They have their job and then they have their home-life, and sometimes those things collide.  I love the stories that he creates and I love the twists and turns.  As far as Molk is concerned, he’s great.  He really cares about what he does.  He is passionate about his detective work and he takes it very seriously. There is also something kind of sweet and off-beat about him sometimes.  He has a great heart and really does care about what he does.

What is Molk’s relationship like with his co-detectives Terry English (Taye Diggs) and Hildy Mulligan (Kathleen Robertson)?
RAPHAEL:  I think there is an enormous respect amongst them and appreciation of other cops who do a good job and work hard.  I think, in general, that there are things that come up that create some contention along the way.  But, in general, there is a respect for one another.

What has surprised you about the show so far?
RAPHAEL:  One of the really cool things we saw last year was how people are watching whole seasons all at once, where they binge it.  I heard that a lot on social media about how people found the show and binged the whole season. What we found is there is a huge audience for the show — we had approximately 9.5 million viewers on various platforms.  So the show really found its audience and had a great demographic, which is what the network loves.  It is also pushing this edgier and more interesting ripped-from-the-headlines storylines that makes cable shows more water-cooler conversation starters.  So we’re excited to have found an audience and the support from TNT.  I just love working with Steven [Bochco] and the quality of the team he has put together.

To see just how the school bus shooting sends ripple-effects through Season 2 of MURDER IN THE FIRST for all the characters and how the case stories continue to weave together, be sure to tune in for all new episodes on Monday nights at 10:00 p.m. on TNT.