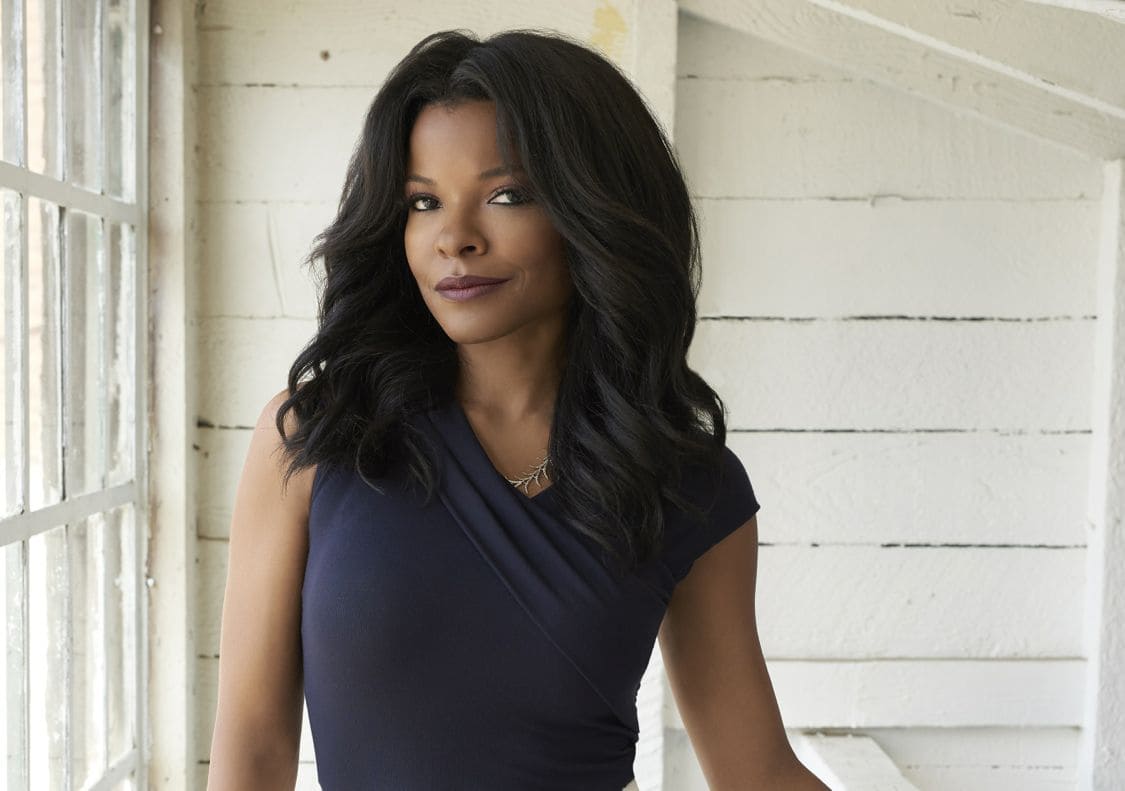 Coming off a scintillating run on FX’s THE PEOPLE V. O.J. SIMPSON: AMERICAN CRIME STORY, Keesha Sharp dives right back into another strong drama series Fox’s LETHAL WEAPON debuting this Fall. Recalling the successful film franchise of the same name, Fox’s drama LETHAL WEAPON reintroduces the iconic characters of Martin Riggs, Roger Murtaugh, and Roger’s wife Trish. In an exclusive interview, Keesha Sharp talks about the appeal of the show and role and how much fun she is having playing Trish in LETHAL WEAPON.

What drew you to the role of Trish and LETHAL WEAPON?
KEESHA: Matt Miller transformed the role of Trish into the Michelle Obama of television. She is a woman who has it all. She is smart, educated, stylish yet has no problem being a mother and being a supportive wife. A wife, a mother, an attorney…how could I resist such a role?

How would you describe Trish? And what drives her?
KEESHA: Adding to question one, a woman who loves deeply with the compassion for others that lead her to being a defense attorney. Trish is a woman who fights for those who cannot fight for themselves. A desire to right wrongs. Can see the good in anyone. Maybe that is why she never judges a book by its cover. She is driven by her love for her family and others.

What is Trish’s relationship with her husband Roger [Damon Wayans] and daughter Riana [Chandler Kinney] like?
KEESHA: Trish is a pretty modern Mother. I cannot give too much away but she recognizes what her kids can be exposed to in today’s society so she rides that fine line with them. Trish gives them just enough freedom, so they will not want to run wild but boundaries. She is their mother not their friend.

What is it like working with Damon [Wayans] and Chandler [Kinne] on LETHAL WEAPON?
KEESHA: Working with Damon is perfect for me. We have so much natural chemistry it just works. He keeps me laughing and so I use that. One reason Trish fell for Roger was his sense of humor (which I use as my character backstory). So when I laugh on camera it works. Chandler is not only a beautiful, talented young lady but she is a sweetheart. I am very much looking forward to our new intimate mother/daughter scenes we have coming up soon that address today’s challenges for teens.

What is Trish’s impression of Martin Riggs [Clayne Crawford]?
KEESHA: First off, concern because the love of her life is partnered with a man, who at first glance seems suicidal. But, Trish being the woman she is sees beyond the exterior and he becomes part of the family. Trish is sort of the adoptive mother to Riggs so that dynamic makes for very funny, and touching, scenes.

Does Trish think Riggs is good for Roger?
KEESHA: We are addressing that in the current episode, so you will have to wait and see!

How familiar were you with the films?
KEESHA: I am a mega fan of the “Lethal Weapon” franchise. So to be honest I was a bit skeptical when I heard they were making it into a TV series. But then I read the pilot, my skepticism was put to rest! We honor the franchise, but our series is based on the first film, although I love them all. It is very grounded with drama, comedy and action! The core of what made the first “Lethal Weapon” resonate with so many.

What do you most admire about Trish?
KEESHA: Her love for others.

What has been the most rewarding part about working on the show so far?
KEESHA: Everything….! The cast, the amazing Producers, the crew, studio and network. I have been blessed to be a part of many wonderful projects in my career. But this is probably the most supportive group of people collectively that I have ever worked with.

I am also looking forward to seeing Trish interact with Captain Avery (Kevin Rahm).
KEESHA: That will be great. When she shows up at the police station, that’s interesting. Because she’s a woman who’s defending who she thinks is innocent and her husband – it’s not him, directly — they are putting people away and she is taking people out. So what is that going to, you know, what’s going to happen with that. There’s some great storylines coming.

Any teasers can you share? What should viewers keep an eye out for?
KEESHA: Well, we tease on set that as a defense attorney my character is “getting them out” while Roger is “putting them in” so I would imagine there may be conflict with that eventually.

There’s some major conflicts since Roger has a health issue and there’s some concerns that he needs to be home with the family a little bit more.
KEESHA: That’s the thing I like too, because in terms of the movie Roger wanted to end it. He wanted to retire. So what’s interesting about what we are doing is that he doesn’t want to. He should, maybe. He had a heart attack, but he wants to go out there and fight for what’s right, and I like that what they have changed. His passion is to do the right – and so does she – to do the right thing. So they’re both fighting in the same regard, but on different sides.

How has it been doing initial interviews for the show?
KEESHA: It’s going great. I’m excited about answering the questions and letting people know that we’re behind the show 100 percent and people are going to love it.

To see how joyously Keesha Sharp inhabits the role of Trish Murtaugh, be sure to tune in for the LETHAL WEAPON premiere on Wednesday, September 21, 2016 at 8:00 p.m. on Fox (right before the EMPIRE Season 3 premiere).