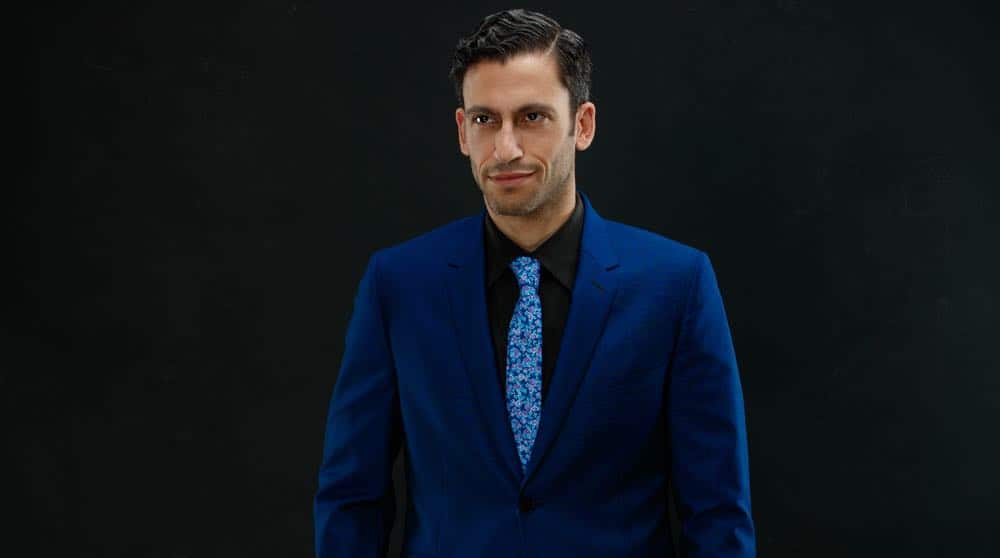 Life as an actor can be like looking through a kaleidoscope and every shift presents a while new amazing piece of art to marvel at and appreciate. Adam Tsekhman is one of those lucky enough to have a rich career of varied roles that showcase his acting talent and have a lot of fun in the process. Currently appearing in the CW superhero series LEGENDS OF TOMORROW, Adam is fantastic to watch in the role of Gary Green, a Time Bureau agent working with the Legends to keep the timer aberrations from destroying history and preserve the future timeline. In an exclusive interview, Adam talks about the amazing time he has working on LEGENDS OF TOMORROW and some of the key lessons he has learned in his career.

What was the initial appeal for you in portraying Gary and working on LEGENDS OF TOMORROW?
ADAM: Definitely the comedic elements of the character. The audition was hilarious, but the scene was created only for the purpose of the audition. They were dummy sides. Not that they were created for a dummy like Gary, but that’s the term used for a scene created only for the audition. It was a brilliant monologue that the writers created and I was very excited to shoot the scene. Sadly, it only exists in the audition

How would you describe who Gary is at this point?
ADAM: Gary is an intelligent, sweet, lovable loser who desperately wants to fit in at the bureau and amongst the Legends. He’s not really taken seriously, but he doesn’t let it bring him down. Or at least he doesn’t show it publicly. He’s a hapless romantic who’s desperate to be loved, but he’s also optimistic that he will find that love. As an agent at the time bureau, he screws things up all the time, but hopefully for the better….just like the Legends!

What do you most admire about Gary?
ADAM: I admire his sweet disposition. He might not be aware of when he’s crossing a line in terms of getting in someone’s personal space, but he’s always positive and kind, which is inspiring.

What is it like working alongside such a talented ensemble?
ADAM: It’s fantastic! I love the actors on the show. They are brilliant, funny and kind. We get along fabulously and I am excited to get to work with them on a daily basis.

How would you describe the dynamic between Gary and Sara Lance (Caity Lotz)?
ADAM: Gary is in awe of Sara Lance. He fears her and is also fascinated with her. Of course, he absolutely adores the AVALANCE relationship and just wants to be included a bit more in their social activities. He would love to get pedicures with the two of them, or go to dinner together. I don’t think Gary has any issue with being the 3rd wheel, as long as he’s included. At the same time, Gary is hyper-aware that Sara could kill him with the snap of her fingers, so he doesn’t want to push boundaries. I think Sara has taken a liking to Gary. Maybe because she realizes how important he is to Ava, or maybe because she’s charmed by his idiotic smile.

What is the dynamic between Gary and the rest of the Legends?
ADAM: Gary and Nate (Nick Zano) have had fun together this season going on missions and I would say they are officially time bros. #timebros4eva Gary and Ray (Brandon Routh) also get along well. They have similar interests and I feel like Ray would be a willing participant in Gary’s dungeons and dragons games. Gary and Zari (Tala Ashe) don’t really know each other too well, but I feel like his positive demeanor has thawed Zari’s cold exterior and they get along well Gary and Mick (Dominic Purcell) are a combination which is odd. I can imagine Gary trying to connect with Mick, but it seems like they are the ultimate odd couple Gary and Charlie (Maise Richardson-Sellers) don’t really know each other yet. Gary and Constantine (Matt Ryan) get along famously. Gary is completely enamored with Constantine!

What have you appreciated about how the show introduced your character?
ADAM: I loved how Gary was introduced as the lowly Time Bureau agent who gives out parking validation. Then we got to see him get his ass kicked by Sara Lance and it was clear where he sits on the totem pole.

What surprised you about the show?
ADAM: I think it was a comedy that surprised me the most. I knew that the show had comedic elements, but I never realized just how funny it is. The writers are geniuses and the way they meld comedy with superhero action and time travel spectacle is simply wonderful.

What has been fun for you to do so far in your scenes as Gary?
ADAM: I’ve loved working with live animals. Chasing a chicken, luring a unicorn with a pomegranate and carrying around a cat in a backpack. All those moments have been great!

What do you think viewers will appreciate about the upcoming season?
ADAM: I think viewers will love this season! It’s super funny and very surprising. The adding of magical elements has been really fun and exciting. It’s wackier this season and no holds barred. There is no limit to where the Legends can go and we get to explore those limits!

You also appeared in the History TV Series SIX. What was that experience like?
ADAM: That one was a lot of fun especially as a contrast to Legends. In it I play an Azerbaijani oil man who turns out to be villainous. It was fun to be a smooth, slick and dangerous character. I also got to do an Eastern European accent with some Russian dialogue, which I love doing!

What is the one thing you look for when considering a role that can make or break it as an experience you want to try?
ADAM: The one thing is whether or not I get hired to play that role! Hahaha… Usually, it’s not up to me, but when it is, I guess I look for a fun challenge. I prefer working on comedy, but I’ve had my most challenging moments in dramatic work. Especially the movie “Tsili” that I shot in Israel. That entire movie was filmed in Yiddish which I didn’t speak before, so I had to learn the language for that film. That was a very rewarding experience.

At this stage of your career, what do you think you have learned from the roles and projects you’ve worked on?
ADAM: I think I’ve learned how to let loose a little more. Usually I’ve been very prepared for work like for a big exam where I want to get a perfect grade. But I’ve learned to still be very prepared, but also have the flexibility to explore and create new moments in the moment while we are filming.

What has surprised you most in your career thus far?
ADAM: The time it takes to break into the industry. It takes many years to meet people and learn the ropes and fail over and over and over again. No careers happen overnight and sometimes never at all, but it’s important to stay positive and understand that things take time!

What are the perks of where you are in your career thus far?
ADAM: Being a part of the glorious CW DC Arrow-verse is a great joy and a perk. I got to attend my first Comic-Con in San Diego this past summer which was a joy and a lovely perk of working on this great show!

What has been your proudest achievement as a working actor at this point in your career?
ADAM: I think it would have to go back to the film “Tsili” with Israeli director Amos Gitai. The film premiered at the Venice Film Festival, which was very stylish and fancy. Learning how to speak Yiddish was a daunting, but very fulfilling experience. I had a Yiddish teach teaching me the basics in LA and I was also going over the script everyday over the phone with my grandmother for a couple of months. Working with her was so rewarding! Yiddish is her mother tongue, so there was nobody better to work with.

Has there been any great advice you have gotten about working as an actor?
ADAM: I like the Joan Rivers’ “school of thought.” She always said, “Say yes to everything. Say yes to every opportunity because you never know where it may lead. Work begets work, so keep working if and when you can.”

What advice would you offer to other aspiring actors?
ADAM: Don’t get down and don’t get stuck in a negative space. This is a tough career path with a massive amount of people vying for a small number of jobs. We all know that, but it’s imperative not to let it bring you down. Actors won’t get the job 90-95% of the time regardless of how good they are. So it’s important to maintain a level head. That means not getting too excited about success and not getting too down on yourself about failure.

Do you have any other upcoming projects that you can share that fans should keep an eye out for?
ADAM: I’m in a movie coming out soon called “Dragged Across Concrete” starring Vince Vaughn and Mel Gibson. I play a sketchy fellow named Behzad. He’s a bulletproof car salesman who smokes a lot and has a heavy dose of smarmy attitude!

Legends OF TOMORROW – Gary Explains To Nate’s Father What is Going On video clip: