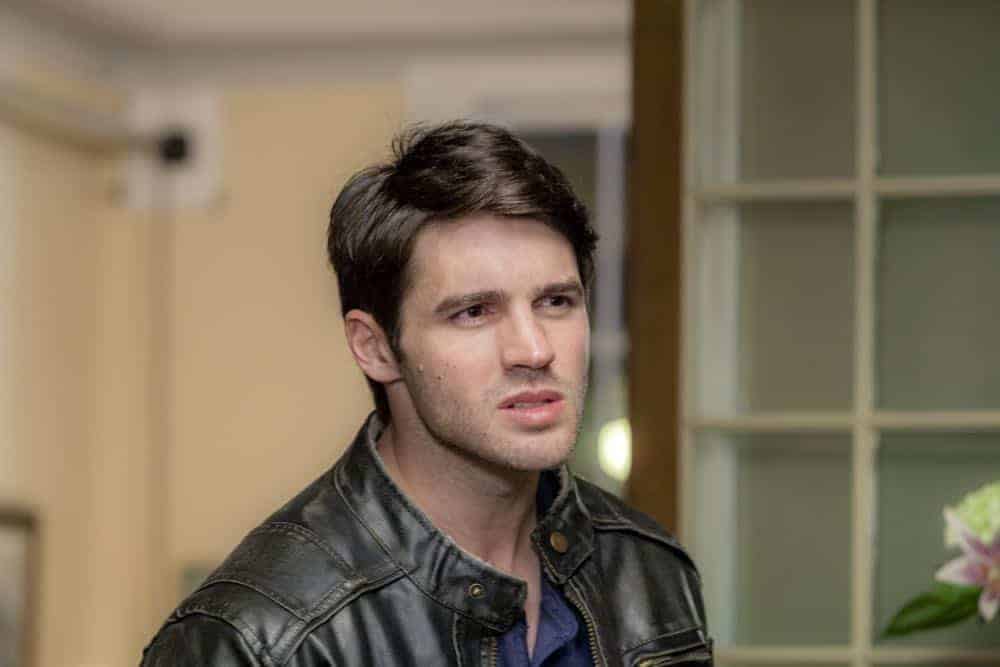 Every once in a while, life gives a young couple another chance at love. It is only a matter of snatching up the opportunity before it slips away again. In Hallmark’s new film “Home By Spring,” just such a rare chance is provided. In an exclusive interview, Steven R. McQueen previews the film and reflects on his career so far.

What was the initial appeal for you about portraying Wayne Hendricks and working on Hallmark’s “Home By Spring”?
STEVEN: It’s a story about lost love re-found.

How would you describe who Wayne is?
STEVEN: Wayne is a man who likes things the way they are. Loretta (Poppy Drayton) always seemed to be part of that picture.

What was it like working alongside the talented ensemble on “Home By Spring”?
STEVEN: It was great. We would joke around a lot of the time. There was always a guitar near by, which was fun.

What was it like with Poppy Drayton on this project?
STEVEN: I’ve never worked with her before. She is an incredible talent.

What has surprised you about working on “Home By Spring”?
STEVEN: For me, how real certain moments felt. Good tunes and great people.

Then as an actor, what has been the one thing you haven taken away from the experience of working on “Home By Spring”?
STEVEN: I always enjoyed understanding how where someone comes from can define them. How a hundred forks in the road get you to where you are now. Wayne definitely had an element of that.

What has surprised you most about your career so far?
STEVEN: Nothing really surprises me anymore. It’s a life where you get to sample all aspects of life. I’m excited to be where I am at and for what’s next.

At this stage of your career, what do you think you have learned from the roles and projects you have worked on?
STEVEN: Everything we work on we seem to take a little lesson along with it.

Then what are the perks of where you are in your career right now?
STEVEN: Freedom.

You previously starred in THE VAMPIRE DIARIES. What did you appreciate the most about that experience?
STEVEN: Well that was where I really started. I had worked before, but there I had learned quite a bit. It was a great experience.

Do any of your characters and the situations they find themselves in ever leave a lasting impression on you? In what way?
STEVEN: Yes, in the sense that you create someone. Someone that makes sense to you. Then that person is gone. It can be a bit strange.

Do you find any of your character’s habits manifesting in your own life? Like what?
STEVEN: Depends. If the character is athletic, you might stay in shape. If he is artsy you might pick up a paintbrush outside of work. If he’s a fighter you might box. If he flies planes you might take some flying lessons. It’s all pretty circumstantial.

Has there been any great advice you have gotten about working as an actor?
STEVEN: For me, the best advice I have gotten was just from watching the greats at work: Jack Nicholson, Robert De Niro and Denzel Washington, among many others.

What advice would you offer to other upcoming and aspiring actors?
STEVEN: Keep a cool head. Stay humble. Do the work.

Do you have any other upcoming projects that you can share that fans should keep an eye out for?
STEVEN: I did this show for Netflix called “Medal of Honor.” It should be out sometime in 2019.

To see whether Steven’s character Wayne will be able to rediscover the love he thought he had lost forever, be sure to tune in for the premiere of “Home By Spring” on Saturday, March 31st on Hallmark Channel. For more information about the film, you can follow @HallmarkChannel on Twitter. Then also keep an eye out for Steven’s new show “Medal of Honor” coming out on Netflix in 2019.