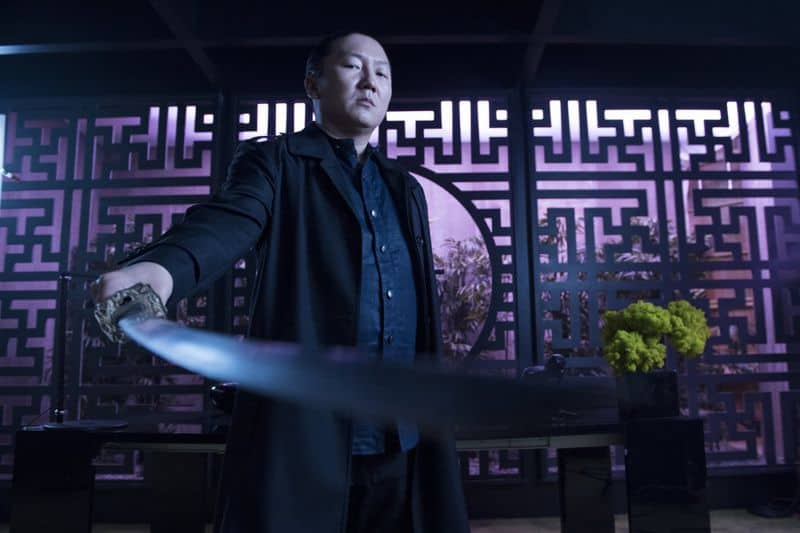 In the original HEROES series, Hiro Nakamura (Masi Oka) was the beloved time-traveler who could stop time and bend time to his will.  Hiro’s joy and enthusiasm allowed him to embrace being a hero in every sense of the word.  He viewed it as a privilege, a gift and a great honor to have been bestowed with his supernatural abilities.  Yet, he was also the voice of simple truisms that soon captivated fans everywhere. Quotes such as: “Every hero must learn his purpose, then he’ll be tested and called to greatness” and “I am the master of time and space. Well, I was. Lately, time and space has been the master of me” and “Fine. Stay here. Be just like everyone else. I want to boldly go where no man has gone before” and finally, the one quote that rang around the globe, “Save the cheerleader, save the world.”  Hiro’s clear sense of purpose and his willingness to do whatever it took to save his friends and fulfill his destiny made him a hero worth cheering for.  It was thus with great delight to find out that star Masi Oka had been invited to reprise the role of Hiro Nakamura in the newest series HEROES REBORN.

In an exclusive interview, we chatted with Masi Oka about Hiro’s new journey in HEROES REBORN and the other amazing endeavors he has embarked upon in his life.

Now that Hiro has been rescued out of the game of Evernow, what is his priority?
MASI:  His intent is definitely to help Noah Bennett (Jack Coleman) to stop Erica (Rya Kihlstedt) from destroying the world because she is using the powers in the wrong way.  Hiro is always about the “hero’s journey” and the ethics of heroism.  So he wants to go back and make sure things are set straight — without stepping on too many butterflies.  But he might want to keep Noah on task, as Noah will do whatever it takes for his daughter.

Noah definitely does not need that distraction if they are going to save the world.  Turning back to Evernow and Hiro’s escape from the game, it seems like Miko (Kiki Sukezane) sacrificed herself to rescue Hiro.  Did Hiro even know Miko?  Did they have any kind of relationship?
MASI:  Hiro had some sort of relationship with her father and that will be clear in this week’s episode.  So Hiro may indirectly know Miko, but I don’t think he has any idea what happened to her.

Did you get a chance to work with Kiki?
MASI:  No, actually, I never worked with Kiki or Toru [Uchikado], for that matter. All my scenes were with Jack, Sendhil [Ramamurthy], Cristine [Rose] and one or two of the new Evos.

Hiro was too busy to be playing with the new kids, the other Evos then?
MASI:  [Laughs] I wanted to, but the problem was I was only in 3 episodes and they tried to cram in as much as they could.

The next episode is called “June 13th – part 1.”  Does Hiro know what happened that day or is he on a journey to discover exactly what happened?
MASI:  Yes, he has an idea of what happened — or at least the aftermath, as far was what Noah Bennett has briefed him on.  But Hiro is about to find out the same way Noah does.

Hiro, himself, has grown quite a bit. What one quality do you most admire about him at this point in his journey?
MASI:  I think his sense of nobility. Even though he has grown older and more mature, he still has his innocence.  His purity towards being a good hero and the sense of ethics he has and the moral code that he has.

You’d mentioned that you are going to be interacting with some of the older HEROES, how does Hiro view his relationships with Noah Bennett, Matt Parkman, Mohinder Suresh?  Are these people his friends still or are any of them possibly enemies?
MASI:  We don’t know yet.  We’ll find out.  I don’t actually have any scenes with Greg Grunberg, who plays Matt Parkman.  But I do with Sendhil [Ramamurthy].  But as far as Hiro goes, Suresh is the face of evil.  But, at the same time, I guess there is a bond between the original HEROES per se.  So there is a built-in trust, which is kind of weird because when we did the scenes there was obviously already a camaraderie between us and there was a camaraderie between the originals HEROES.  So I think there was probably some kind of background since they all knew each other and knew what was happening.

You also worked with Cristine Rose, so Angela Petrelli is back.   Is she still kind of playing a villain at this point or is she perhaps helpful?
MASI:  She’s actually more helpful.  She’s no villain compared to Erica — I will tell you that!

Will Hiro be resisting the urge to change the events of June 13th in Odessa?  Will he be steadfast in his resolve to not step on any butterflies?
MASI:  I think he will be steadfast.  In the original HEROES, like maybe in the first season, he would have had no qualms — well, he would be careful — but he was always about saving the world.  So I think having gone through that journey, he is a little bit wiser and he is very cautious about stepping on butterflies and causing a rift in the time-space continuum.

Are you familiar with some of the new Evos, the newer HEROES REBORN characters?  Do you have any favorites?
MASI:  There’s something I really like about the Japanese characters: Ren and Miko.  It is like passing the torch onto the next generation. They are like the Hiro and Ando [James Kyson] of this series. So it’s nice to see that.  I thought Robbie [Kay] is doing a great job.  And I love Henry [Zebrowski].  Henry is like the funnest guy.  It’s too bad they killed Quentin in the last episode.  But he is so much fun to hangout with.  I didn’t get to do much scenes with him, but he is a great improviser.  We’d shoot the breeze, like over dinner, and it was like non-stop laughter.

Henry was a great addition to the show and it was such a shock when they killed his character off.
MASI:  [Laughs]  You never know — it is HEROES.  I don’t know what happens in the future, but who knows.  Hiro might go back in time and he might be saved.  I truly don’t know.  But it is HEROES and we have been known to kill off characters and bring them back.  Like Nathan.  He was like our Kenny of SOUTH PARK.  He’d die, but he’d always find a way to come back.

What would you like to tease about this next episode for Hiro?
MASI:  There’s one relationship that he didn’t have in the original series that we will kind of see being fulfilled this time around. So that’s kind of interesting.  And a lot of the dialogue is homages to the original series.  So you will see a lot of familiar dialogue and some of the HEROES-isms haven’t changed.  You will also see Hiro upgrading his sword.  Instead of fighting Samauri-style, he is doing dual-sword fighting, Ninja-style.

You also have a new television series coming out on Fox.  What can you share about that?
MASI:  Right now we are just writing the pilot.  But it is set in an ESL (English as a second language) class and it is a love-letter to America through an immigrant’s perspective.  Like at LAX, there’s two lines and one line for those who are just so happy to be home and exhausted from traveling, and the other line is for those who are afraid because they fear they are going to be sent home because their papers didn’t work out.  I think there are some amazing things in America that we take for granted and things that from an immigrant’s perspective that might be kind of strange.  Like how on Presidents’ Day, we celebrate by purchasing a mattress half-off.  Like ‘cause when I think of President Lincoln, I think of a good night’s sleep.  [Laughs]  It’s those things which are just kind of strange.  Another thing might be you hear a sound of something blowing up and you don’t know if it is a gun or fireworks.  But we know at least in America that fireworks are illegal. Then there’s tipping.  That’s a strange custom around the world.  And paying for healthcare.  So we kind of explore things that are American, but satirize it from an immigrant’s perspective.

Are you working on any other projects that you can share or are you totally busy with HAWAII FIVE-O?
MASI:  There’s a couple of movies that I’m producing. One is a project for Warner Bros.  Then I have a game studio that I am the CEO of and we just released our latest mobile game called “Beacon 38” – beacon, as like a guiding light.  That’s kind of a fun Halloween-ish, horror adventure with beautiful graphics and music.  You can find it on iTunes or Google Play and it is available on download and mobile.  It’s a spooky, space adventure.

You sound so busy!  How do you find time for all of it?
MASI:  [Laughs] That’s because I can actually stop time.  No, I wish I could.  All this traveling is killing me.  I also wish I had an assistant because it would be nice to have some help.  But I think it’s just because I am so motivated. I love all the things I do.  But then a lot of it is waiting and, fortunately, for the game company, I have a great producer who takes charge of things.  And on these other projects, I’m collaborating with other people.  So there are people that I’m waiting for and I don’t have to be 100% on something all the time.  Then sometimes it all lines up on the same day and it just makes my brain explode.  It’s like having eight children and all eight children are not really behaving on one day. There’s always going to be at least one child who is acting up!

It sounds pretty fulfilling while a little bit challenging at the same time.
MASI:  It’s definitely a lot of fun.  I’m just very grateful and glad to have this opportunity.

To see what final trick Hiro and Noah may have up their sleeve, be sure to tune in for an all new episode of HEROES REBORN on Thursday, October 29th at 8:00 p.m. on NBC.