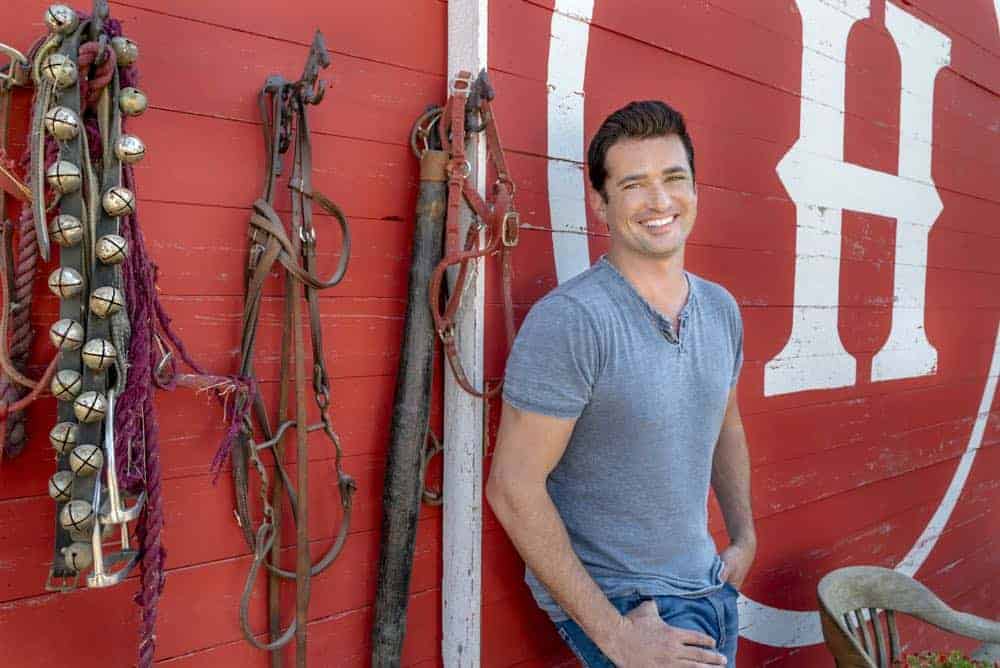 In a charming tale of love discovered on rural horse ranch, Hallmark Channel’s “Under the Autumn Moon” is a picturesque and heart-warming look at how life offers unexpected rewards just when you least expect it. For Josh Ketchum, wonderfully portrayed by Wes Brown, his family ranch is the one thing he is desperate to hold onto and make something of after pouring everything he has into it. In an exclusive interview, Wes Brown talks about what it was like bringing “Under The Autumn Moon” to life and all the fun he had working on the film.

We’re here to talk a little bit about your new film “Under the Autumn Moon.” Maybe you could talk about how the script appealed to you and what you thought you wanted to do with this character?
WES: I guess the first draw was the fact — I mean, it’s not going to come across as a real life western, but it definitely read that it had the western lifestyle, which I’ve always big fan of. I’ve gotten to do other Hallmark films in that same category. So that was the first appeal to it. The second was I always love filming location a lot more than in the studio. I am always going to Canada to shoot, and I had never been to Winnipeg before, so everything was falling right into place. Then a guy trying to save his ranch with decades and decades and generations of the family having ownership of it was very appealing. That was it, kind of a no brainer.

What did you like about filming up there in Winnipeg to do this film?
WES: Well, I’d never been to Winnipeg. But I always had such had a nice experience in Canada. First job I had ever done in my life was in Nova Scotia for several months followed by years filming all different things in Vancouver. This one was in Winnipeg. Nonetheless, it was a new part of Canada to get to see.

It’s certainly really beautiful. “Under The Autumn Moon” is one of the more green looking Hallmark films I’ve ever seen. It looks stunning.
WES: Well, it’s funny too, because it’s so incredibly green and this was a fall movie. I was told there was going to be some color corrections just to turn the leaves to Autumn colors.

It was beautiful. It must’ve been a nice place to actually be a part of when you get to do this kind of film then.
WES: Yeah, that’s the best part of my job. I love staying home, but I also love getting to travel too.

How would you describe your character Josh? Who is he?
WES: Josh I would describe as a very strong but quiet soul. He’s kind of a new age thinker in a sense as he’s running this dude ranch and you get a certain feel for what these guys are like. He went for an animal science degree at Cornell University. So it’s almost like he took everything he learned from his family and then applied it even more to be the best version of himself as he can be. So very forward thinking, with that being said kind of a quiet guy who still has that North Dakota old school charm, I guess.

He certainly has all that! I enjoy that when I watch the Hallmark films as they allow their characters to be the most charming version of themselves and that’s always fun.
WES: Yeah, very soft spoken guy. But really wants the best for everyone involved. It’s not all about him. He cares about his sister. He really wants to make the best decisions, if possible he can.

What was it like working with Lindy (Booth) on this film?
WES: I had never met Lindy before and I gave her a lot of crap about all her green drinks she always drinks. She was great. The more I liked her, the more she got picked on a lot by me. She was always fantastic. [Laughs]. She dished it back just as well.

Lindy mentioned that you two had quite a hay fight in the movie and she remembered that quite differently than perhaps it was filmed.
WES: [Laughs] Right, right. I may have thrown one or two after the “cut” too. But, that’s okay. It all worked out.

In the film, your characters Alex and Josh have an interesting take on a “meet cute,” which is classic for these kinds of films and your character Josh actually throws a rope and mistakenly ropes the girl. So what was it like for you film that scene?
WES: Well, I started by practicing on the makeup girl. She didn’t think I was going to rope her. But, I did. It was a little bit of “movie magic”. I threw at her a few times. There might have been a few cuts in there. [Laughs] I definitely got my practice in. Let’s just say that.

What do you think about dude ranch’s is romantic? What kind of makes it kind of come alive for this story.
WES: I use to personally go out to my friend’s ranch in South East Texas and, I mean a ranch should be whatever you make of it. But it also is a very romantic spot too. We’d always go out riding in his truck at night time. There were bonfires. Because I don’t own this ranch, we’d always go to this place specifically around holiday times. There’s just a feel for having all this land around you, a sense of privacy, you’re out in nature. There’s so many things. A ranch can be just as great as a tropical place sometimes.

It’s true. It’s all out of the lens you’re looking through when you start looking around you. What were kind of some of the fun scenes or things that you got to do while doing this film?
WES: Yeah. I didn’t get to ride a whole terribly lot in this movie. Anytime I get to ride in a movie is a lot of fun. We had a little bit of a cowboy hat issue that didn’t really make it in the movie as much as I had hoped. Anytime you get a chance to play those characters on a horse with hat in a film is a lot of fun. All the riding stuff I enjoyed — everything outdoors we got to do. Specifically, there was a bunch of scenes with goats and stuff. [Laughs] Anything that makes it a little more difficult is always a little more fun, in my opinion.

Did you have some rascally goats when you were doing the film?
WES: Yeah. I’ve been around horses a lot. Goats not so much. They are aggressive little things. I was surprised.

I heard the wrangling the goats might be a little bit tricky when they are actually called to do some scenes.
WES: [Laughs] Yeah, it’s a little tricky. Absolutely.

You’ve done a lot of work with Hallmark and you’ve got another film coming this Christmas with Hallmark. What keeps bringing you back again into the Hallmark family?
WES: I can’t speak for a lot of actors, but what you want is to see it more as a “home” somewhere. It’s never an easy job. There’s always a lot of competition. One, to have a home there — it is always a great feeling that someone keeps calling you back. That’s the first part. The second part is, as you do several of these things, you do gain more and more fans. People come up to you. You find out these movies mean a lot to a lot of people. It’s not just something that we do and it’s forgotten about. It resonates to audiences all over the place. It really means a lot and that’s a good feeling to know that you’re making movies that really no one really makes anymore. These wholesome films that’s definitely got their place and people love them. It’s a great feeling to know that this place keeps calling you back. Hopefully they’ll call again. That’s what I’m going for!

Can you talk briefly about “Christmas in Graceland”?
WES: Oh wow, briefly is going to be tough. Let me think. I guess when I first got that call about “Christmas in Graceland,” the first thing — kind of like I said about Canada — you have to do a double take on the setting. I guess the setting is important because wherever you get called to go, that’s where you are for an extended time. I was always a musician first, way before I was an actor and I was a fan of Elvis, maybe not a big a fan as some of the die-hards that I’ve met. I can’t compare myself to them. And Christmas is probably my favorite time of year. So Elvis Presley and Graceland, the fact that we were the first film to ever be filmed there. It was just surreal. I had a lot of moments where I just had to sit and be very grateful before I even read the script, when they called and told me about it. Then Kellie Pickler is just a blast to work with. I mean I get to work with all these singers and musicians. It was great. It actually was one of the few films that have ever exceeded my expectations about how good of a time we had making it.

Do you get to perform in the film? Do you get to sing?
WES: Yeah. Oh gosh, I think we maybe sang maybe five songs. Maybe four songs that we got to sing together. I believe what I was told was I was the seventh person in history to get to play Elvis Presley’s piano, except for the guys that cleaned it, and they let this knucklehead play. [Laughs] Hey, I will take it!

“Under The Autumn Moon” preview:

On Location – “Under The Autumn Moon”:

On Location – “Christmas In Graceland”: