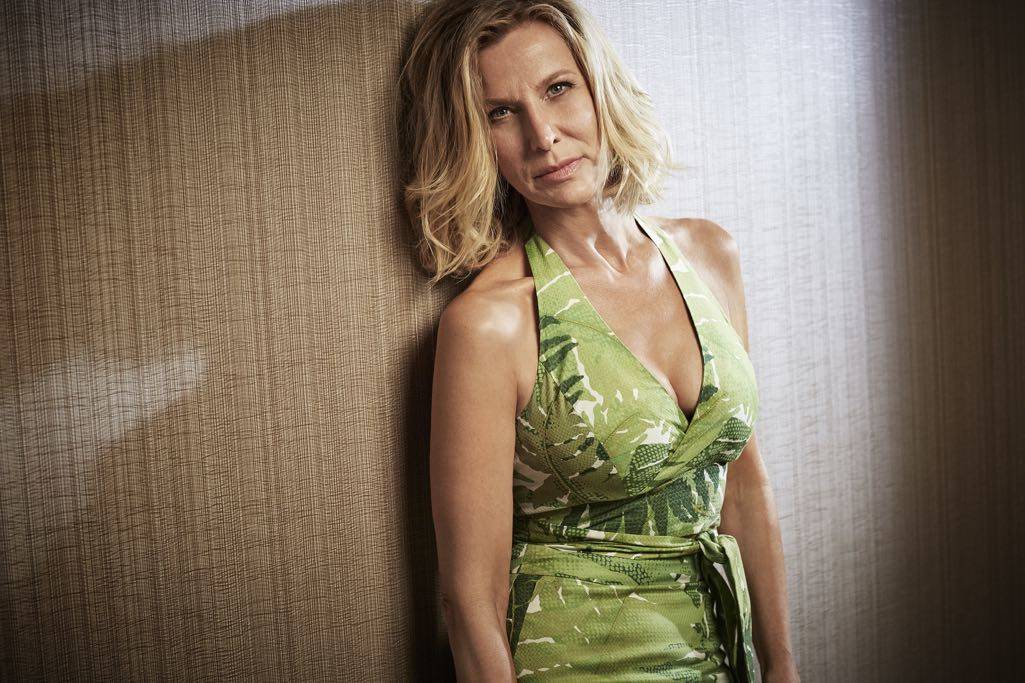 In TNT’s new drama series, a thief and a hit man team up and dare each other to be a better version of themselves. However, their true natures and true callings are in a constant tug of war for their attention and souls. Starring Michelle Dockery and Juan Diego Botto, the series is absolutely riveting and sensual. It is also a very dangerous game they find themselves embroiled in. Along the way, we meet a few characters that are pivotal in their thorn-filled journey, including Letty’s mother Estelle, superbly portrayed by Lusia Strus.

In an exclusive interview, Lusia Strus talks about the appeal of this dark noir-ish tale of dark fantasies, dangerous professions, and a mother’s love fighting to save at least one person from the downward spiral that criminal life leaves in its wake.

What drew you to the role of Estelle and GOOD BEHAVIOR?
LUSIA: I read the audition scenes for Estelle, and I just knew her. I can’t explain it, really. I didn’t know her with my brain. I just understood her. There was so much between the lines. I empathized with her. I empathized with Estelle’s and Letty’s relationship. I didn’t even have a copy of the pilot script. I had two scenes. Yet, Chad Hodge and Blake Crouch and this team of writers created these women I’ve never seen before but who I knew. I could tell just from these scenes. Then I got to the read the pilot. And I thought, “This defies convention.” Then I got to see the pilot and I thought, “I’ve really never seen anything like this.” The relationship between Javier and Letty — how they crash into each other and each recognizes the other may be the one each needs to help fix all the damage — immediate and ancient. I feel very lucky to be a part of it.

How would you describe who Estelle is? What do you most admire about her?
LUSIA: Estelle had Letty at 15 and raised her. I think Estelle was one of those kids who tried to pretend she was a grownup, so she never got to be a kid. Once she was in a position of having to act like a grownup — she was a kid raising a kid. So, she’s a sort of feral. She likes her wine. She gets married a lot. She has her demons. She’s funny. Estelle doesn’t think with her mind. She thinks with her mouth and her guts and her fists and her vagina. And that’s how she survives. She’s raising Jacob, Letty’s son and she’s genuinely trying to do a better job this time around. I love Estelle because she’s offended by so little and she really doesn’t care what other people think. There are no boundaries when it comes to Estelle. She has her own code, her own tools for living, and her own moral compass. They may be damaged tools and a skewed compass for some people but they get the job done, even if the result is messy.

Why is she so afraid of giving Letty a second chance to be a part of her life?
LUSIA: If you asked Estelle, she’d say she’s only concerned about Jacob — about not wanting to give Jacob a reason to be disappointed again. Estelle doesn’t admit things to herself about her own pain and fear. She just gets angry and resentful. It’s not like Estelle has gone to therapy or attends Alanon meetings. Her idea of a healthy boundary is getting a restraining order on someone. But family is family. We are sometimes the most vicious with family because family sticks it out. Estelle and Letty have this primitive relationship. They’re vicious like sisters and bonded like a mother and daughter. And they’re bonded like sisters and vicious like a mother and daughter. And I think that’s beautiful. But beauty doesn’t have to be pretty. So, more is revealed as the season goes on.

What is it like working with Michelle Dockery as Letty?
LUSIA: I’ve never seen DOWNTON ABBEY, so I only know Michelle as Letty. Michelle and I like each other. Around famous people, I have often felt like I should do the “don’t speak unless spoken to” thing. I met Michelle and it was immediately comfortable. She’s from Essex. From what I can tell, it’s the British version of Chicago. That’s what it feels like. So, it’s natural. Estelle and Letty feel natural, too. We start scenes and they go in directions and we go where we go. We’re in tune. She’s generous and her work ethic is beyond anything I’ve ever seen. I have a strong, Ukrainian work ethic, yet I was floored by what she did on this show day after day for months. She’s a generous actor — acutely intuitive — a very present person to work with. On set and off. And there’s a lot of laughing. And occasional dance breaks.

Then what was it like working with Juan Diego Botto? What was your first impression of him?
LUSIA: I met Juan at the first read through before we shot the pilot — we just greeted each other briefly then sat down and began. When we were done, I sidled up to Chad Hodge, glanced at Juan and whispered, “Holy Shit.” And Chad said, “I know.” That was my first impression. On the third day of shooting the series, once we got picked up, Juan dislocated his shoulder. They took him to the hospital. I think he may have missed the next day of shooting, though I can’t remember. He worked for three months with that shoulder. He was steadfast. That’s Juan Diego Botto. And he’s kind. And humble. And empathetic. And I don’t know if he is aware of how disarmingly beautiful he is. He’s that kind of man.

If Estelle gets to meet Javier, what do you think her first impression of him would be?
LUSIA: She may get to meet him (no spoilers!). But if she does — I think her first impression would be suspicious — not for being a hit man, because Estelle wouldn’t know that, probably but because he’s with Letty and Letty doesn’t have the best track record. She probably thinks, “drug dealer.” But Javier has a knack at winning people over …

What has been the most fun for you to do in the show so far?
LUSIA: Learning has been good. And the people have been the most fun. The actors. The crew. The writers. The creators. We have a family in this little town. I’m happy when I go to work. Even the harder, longer days — we were doing something we loved. That is my definition of fun.

Is there a particular moment or scene that you are most proud of? If so, why?
LUSIA: In the final episode, there is a scene between Letty and Michelle in Letty’s bedroom that I’m proud of. I really am. It was a special day for me. I felt like the learning I had done through these episodes culminated and I looked at Michelle and something happened. And it kept happening over and over, each time we shot. We just stayed in this place together. Even the rehearsal for the crew was special to me. Chitra, one of our writers wrote these beautiful, honest words I got to say to Letty and I went home that night feeling satisfied and grateful.

What have you learned from working on this show as an actor or as a person?
LUSIA: Wow. As an actor, I’ve learned how to do a series. This is my first time doing it, so there was a lot to learn. I’ve never worked on something where I didn’t know what was coming next. I’ve always known the beginning, middle, end while working on a project. I’ve never gone through this experience before. Getting to work with different directors and different writers for the same project is new. There’s too much to list as to what I learned as an actor. I asked questions. I watched. I asked for notes all the time. I developed confidence. I developed a way to focus. What I learned as a person is that being on a TV series does not affect my opinion of myself, how I feel, how I live, or who I am, at all. For better or worse, that’s the truth. It’s been a good realization.

What has been the best advice you have gotten in your acting career?
LUSIA: Best acting advice:
1.Find it in the script.
2. Laugh. Don’t “act” like you’re laughing.
3. When the character has a stage direction such as [is thirsty and reaches for water] — you don’t need to show the audience you’re thirsty before reaching for the water. You’re reaching for the water because you’re thirsty. Don’t show. Think.
4. Be of service to the playwright, the audience, the other actors and your character. That’s why you’re bowing at the end.
Best career advice:
1.When you audition, it’s your chance to be that character for that time. Don’t try to please or impress anyone but yourself. That’s when you walk out having regrets.
2. The self– deprecating, self–condemning, critical thing in your late teens and 20’s that you thought was tragically interesting is not a good look in your 30’s and 40’s. So, lose it.
3.Take classes with Lesly Kahn.

What would be your advice to other upcoming actors?
LUSIA: Keep your eyes on your own paper.

What are the perks of being where you are now in your acting career?
LUSIA: I just got to go to The Roxy last night for the premiere of GOOD BEHAVIOR and walk the red carpet and have that experience. I got to do it with my sister being there with me. I got to do it with this cast and some of our crew. And they’re my friends now. Not only did I survive, but I had fun, and got a gift bag. And I can pay my mortgage and when a big vet bill occurs, I don’t have to figure out how I’ll pay my mortgage.

Finally, what teasers can you offer about what to expect in the first season of GOOD BEHAVIOR?
LUSIA: Letty and Javier bring things to each other and to the screen that no one would ever see coming there.

To see just what further crazy adventures Letty and Javier get embroiled in and if Estelle can find a way to reconnect with her daughter, tune in for all new episodes of GOOD BEHAVIOR on Tuesday nights at 9:00 p.m.on TNT. Tune in for the sizzle, stay for the surprises!