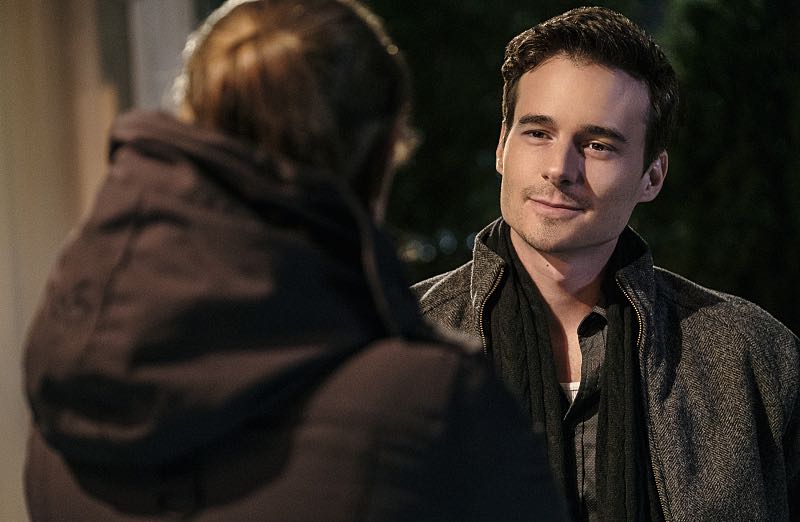 In the CW’s drama mystery series FREQUENCY, Daniel Bonjour portrays Daniel Lawrence, the star-crossed love of Raimy Sullivan (Peyton List) who had been Raimy’s fiancé in the original timeline. However, as Raimy and her father worked together to track the elusive Nightingale Killer, the timeline shifted and Daniel Lawrence and Raimy’s love affair was torn apart and he no longer remembered their time together. In recent episodes, Raimy and Daniel’s paths crossed again and the deeper feelings seemed to spark again. In a recent exclusive interview, star Daniel Bonjour talks about the appeal of such an emotionally complicated love story, as well as the joys of reaching this rewarding point in his career.

What was the appeal of the role of Daniel Lawrence in the CW series FREQUENCY?
DANIEL: I was a fan of the movie, so that sparked my interest initially, but in the end it was the writing. The characters were extremely grounded and real, even in the face of extreme and surreal circumstances. I loved how relatable they all were in their own unique way.

How would you describe your character? What do you most admire and/or like about him?
DANIEL: Daniel is an ambitious young entrepreneur at first glance, but as you are able to follow him in his interactions with Raimy, you get to see a very subtle but present sense of humor. He’s always trying to keep moments light and not take things too seriously. I think that’s why he’s such a good match for Raimy. I love that about him. He’s also a bit of a romantic and a kid at heart.

What journey does your character Daniel undertake in this series?
DANIEL: The biggest journey would be discovery. After we meet Daniel in the pilot, we essentially start over after that. He’s a different person in episode two – he hasn’t met Raimy and experienced life with her. There’s so much that’s going on in Daniel’s life that we never get to see, but it’s what gets him to where he is when he starts bumping into Raimy. I think as the series progresses, he’s discovering a lot about himself and why he would even consider engaging a total stranger that claims to know him out of nowhere. He’s definitely at a fork in the road in his life, and how he deals with Raimy is very telling as to what path he choses.

Should we be rooting for Raimy and Daniel? And do you think Kyle (Rob Mayes) poses much competition for Raimy’s heart?
DANIEL: If you believe that two people are meant to be together, then you should definitely be rooting for Raimy and Daniel! I think that Kyle poses competition because there isn’t anything really flawed or wrong with Raimy and Kyle’s relationship. The question is whether it’s exactly right. Raimy has to ask herself if she is happy with someone that isn’t a bad person and could actually work, or does she risk it all to be with someone that she believes is perfect, even though this new timeline could prove that to be wrong. How big a risk do you take for love?

What was it like working with Peyton List?
DANIEL: Peyton’s great. She’s an insanely kind and caring person who only wants what’s best for the audience. I’m always pleasantly surprised by the subtle details that she integrates into her work. We approach our work very similarly, which is a big help in our scenes because we know how to address each other’s concerns. We’ve also grown to be good friends off set, and that in itself makes my job that much easier.

What was your favorite part about working on this project?
DANIEL: I love the people I work with. Shooting in Vancouver, I have to be away from my wife, which is hard, but the cast up here are all in the same boat, so we’ve created a mini family up here. We’re always getting together and goofing off on set. When you have a show that you honestly believe puts out good work AND you enjoy your cast mates, you’re really in a win-win situation.

Did tracking all the timelines and their fluctuations as events changed ever start to mess with your head and make it tricky to keep track of what was going on?
DANIEL: Only at first. Daniel doesn’t change much after that because technically he is no longer affected by Raimy and her actions. But from the start, I had a very tough time “forgetting” Raimy, after I had spent so much time and effort creating this relationship. It existed in my mind, and I couldn’t see past it. Eventually, I decided to just create two different characters. Daniel who knows Raimy, and Daniel who doesn’t. The Daniel who doesn’t has a whole other life that will most likely never show up on screen, but informed me tremendously.

What was the one thing you took away from working on FREQUENCY?
DANIEL: Hmmmm… Probably that anything can change in an instant when working in TV. But you have no control over where stories go or how audiences will interpret things, so all you can do is keep your head down and do your work. I think that’s the mentality we all took in the pilot. We loved the show and what we were doing, but stressing over whether it was going to be picked up to series or not had no benefit. So we just did the work and hoped for the best.

What do you hope viewers take away from watching FREQUENCY?
DANIEL: That it’s a story about people. Life is crazy enough as it is, and when you throw in a Ham radio that communicates across time, it get’s even crazier. But it’s the people that the show introduces us to that are affected by it all. Yes, there’s a murder to solve and a serial killer to catch, but I encourage viewers to pay attention to the people who are caught in the middle.

At this stage of your career, what do you think you have learned from the amazing variety of roles and projects you have worked on?
DANIEL: I’ve learned that there is no right or wrong when it comes to art or entertainment. It’s all subjective. There’s a vision behind every project you see on TV or in movies. A vision that came from a very real place. When something is considered good or bad, its only because the original vision was able to shine through it all and speak to a large group of people. Sometimes that vision is caught up and distorted by other factors in the industry (money, politics, restrictions, etc.), but there’s always a vision. I’m just happy to be a part of someone else’s at times and happy to have my own at other times.

Then what are the perks of where you are in your career right now?
DANIEL: I think I’m at a place where I finally feel like I’m in the game. For the longest time, I was just trying to get in the game, getting closer and closer, maybe even being courtside at times. Now I’m in it. How long I stay in it and how well I play, is a whole other story 😉

If there were one role you would like to revisit, which would it be and why?
DANIEL: I would love to revisit all my roles, just to see how they would be informed by the person I am today. I feel like I’ve grown tremendously as an actor, and revisiting something just means I get to play with it again. But if there was one, it may be RCVR, only because I feel like it could have gone so much further and in the original episodes, we were only touching the surface of who Luke Weber really was.

Has there been any great advice you have gotten? What advice would you offer to other upcoming and aspiring actors?
DANIEL: I’ve gotten plenty of amazing advice over the years. One doesn’t stand out over the rest. My advice to aspiring actors would be to focus on the art of it all. People too quickly go for the business side. The business side is essential of course, but it will reveal itself no matter what, so you might as well focus and develop the artist in you while you can. It will make you more confident when it counts, and confidence is everything in acting.

You recently released the film “After The Rain.” What inspired you to write and direct this film?
DANIEL: I first read it as an actor and fell in love with it. I simply polished some of it as a writer, allowing it to be better translated to independent film. After months of looking for directors and working on the script with the original writer, I threw my name in the hat to direct and thankfully the producers were on board with it. It was just timing and persistence that turned into a beautiful film that we loved creating.

Also what can you share about “After The Rain” and the role you portray in it?
DANIEL: It’s based on a true story of a young man dealing with terminal cancer. What I loved about it, is that it shows all shades of how people deal with devastating circumstance. There is no one way to grieve, and “After the Rain” was able to explore that. How something like cancer affects those directly involved as well as those indirectly. I lost about 30 pounds for the role at a time when I wasn’t big in the first place – which was a first for me. Every single person involved in the film poured their heart into it – without them, we wouldn’t have been able to make it for next to nothing.

Are there other upcoming projects that you can share that fans should keep an eye out for?
DANIEL: I’ve been doing a lot of writing and have a film and a TV series that we are developing and pitching with Brillstein Entertainment. I’m hoping to direct the film, which took home the grand prize at the Final Draft Screenwriting competition this year. It’s a coming of age story about a young girl who moves in across the street from a reclusive boy who claims to have super powers. Essentially, the story of a teenage Clark Kent, before he ever thinks about becoming Superman. The catch, however, is that we’re not even sure if he actually has powers or if he’s making it all up. On the acting front, I’m looking for what comes my way next and seeing what could be a good fit.

What do you aspire to do next?
DANIEL: Get better at everything I’m already trying to do. I want to become a stronger actor, writer, and director. However I do that will probably determine what I do next. I honestly love what I do, and all I can hope is that I keep doing it and get better at it.

To see how the love store of Daniel and Raimy plays out as the timelines continue to shift, be sure to tune in for all new episodes of FREQUENCY on Wednesday nights at 9:00 p.m. on the CW.